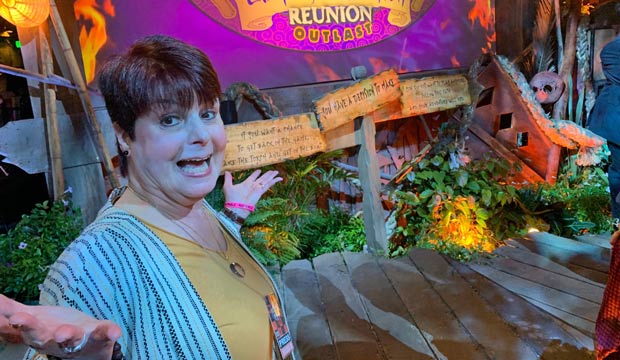 There are those “Survivor” fans whose dream is to compete in the game one day. Then there are those who, like me, would be satisfied to simply attend the taping of live portion of the finale and gawk at the players that they have been watching for weeks. Well, I can now cross that off my bucket list. I was part of the audience who participated in the three-hour wrap-up of Season 38, aka “Edge of Extinction.”

By now, you probably know that former Extinction Island dweller Chris Underwood somehow managed to win the title of Sole Survivor away from the favorite to take it all, idol-magnet Rick Devens, after only playing only 13 days. Controversial doesn’t even cover that outcome.

But that decision couldn’t spoil my opportunity to gaze upon such fan favorites as the season’s returning veteran players — Joe Anglim, Aubry Bracco, Kelley Wentworth and David Wright. But rather than talk about what was shown on TV, let me share with you what happened that you didn’t see or hear.

*The most popular selfie op. Those three signs that greeted the eliminated contestants were in the house. After watching each and every rejected player puzzle over the directions before deciding to sail off to the mysterious island, it was irresistible to puzzle over the choice myself. Alas, there was no lit torch to grab.

*Executive producer Mark Burnett was in attendance. He walked around wearing designer sweats and a Cheshire cat smile.

*Former contestants were in the house. The alum in the audience included John Cochran, who got a hand slap when host Jeff Probst made his entrance with the urn filled with tribal votes. Others in the studio were Joe’s intended Sierra Dawn Thomas, Troyzan Robertson and Rob Cesterino.

SEE‘Survivor’ contestant deaths through the years

*Joe took Jeff up on his offer to get his flowing mane cut. When audience members were asked during a commercial break if Joe should rid himself of cascading curls, most voted that he keep his hair. But he apparently couldn’t pass on the offer for some free barbering.

*Kids apparently love “Survivor.” More than a few youngsters in the crowd were allowed to stay out late on a school night. One boy with purple locks naturally was a Wendy Diaz fan, whose hair has a bright-blue hue. Another boy wore a T-shirt singing Joe’s praises. And one young lady had #RickDevens written on her T-shirt in glitter.

*Clapping rehearsal. Bill, the guy who acts like a warm-up act by engaging in humorous banter during ad breaks, has the audience practice their claps at varying audible levels of enthusiasm.

*No, they don’t hand out small servings of boiled white rice. Bags of Skittles and chips were offered as well as coffee. And if you are really lucky, Bill will throw you a freebie “Survivor” buff.