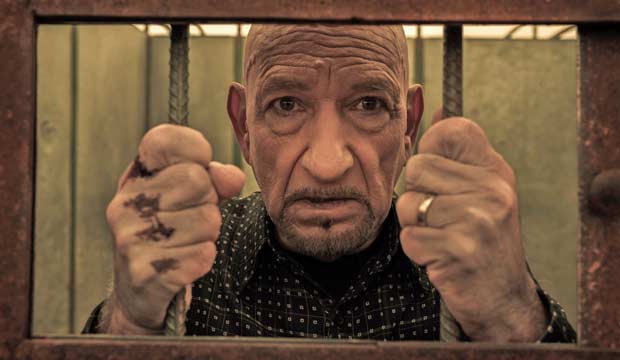 The limited series “Perpetual Grace LTD” aired over the summer from June to August, so it might have fallen under the radar as the Emmys for the previous TV season were still being decided, but with the Golden Globes and SAG Awards approaching it might be time for awards voters to say “Grace,” especially with a showcase performance by Ben Kingsley at the heart of it.

Created by Steven Conrad and Bruce Terris (Amazon‘s “Patriot“), the series follows a young grifter (Jimmi Simpson) who tries to prey on Pastor Byron Brown (Kingsley), but the pastor is more dangerous than he bargained for. It’s a villainous role that has been compared to Kingsley’s turn in “Sexy Beast” (2001), which earned him one of his four Oscar nominations and one of his eight Golden Globe noms. He plays Pastor Brown “with a slight tinge of menace from the very beginning” that is “quickly” unleashed.

On top of that, Tim Goodman (Hollywood Reporter) declared him the “odds-on favorite to win the Emmy” in 2020. But those awards are still several months away. First up are the Globe and SAG Awards, and a beloved Oscar winner taking on a scenery-chewing role shouldn’t be underestimated at those awards. He’s a contender for Best TV Drama Supporting Actor, a category that has gone to other Oscar-winning veterans in recent years like Paul Newman (“Empire Falls,” 2006), Jeremy Irons (“Elizabeth I,” 2007) and Jon Voight (“Ray Donovan,” 2014).

The SAG Awards also love veteran movie stars, with prizes going to Al Pacino (“Angels in America” in 2004, “You Don’t Know Jack” in 2011), Kevin Costner (“Hatfields and McCoys” in 2013) and Michael Douglas (“Behind the Candelabra” in 2014), among others. But the SAG Awards may be especially challenging since there is only one category for movie/limited series actors, combining lead and supporting performers. But Kingsley has actually won that award before, for the miniseries “Anne Frank” in 2002. He was also nominated in that race for “The Tale of Sweeney Todd” in 2000 and “Tut” in 2016, in addition to his big-screen bids for “Sexy Beast” and “House of Sand and Fog” (2003).

So don’t underestimate Kingsley in the coming weeks and months. He’s an underdog with a mean bite.