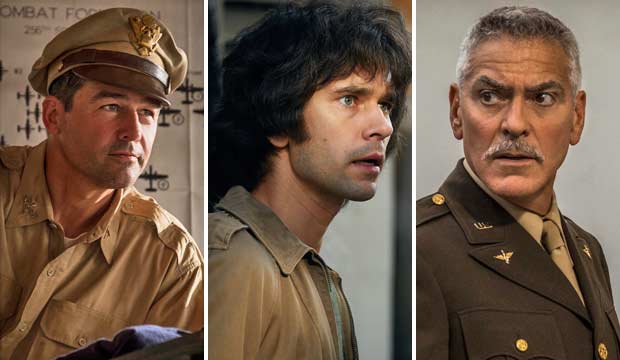 Ben Whishaw (“A Very English Scandal“) has led our Emmy predictions for Best Movie/Mini Supporting Actor ever since we opened our predictions center earlier this spring. But might we be underestimating his rivals? According to our racetrack odds, he needs to be most wary of two actors from “Catch-22“: Oscar winner George Clooney and past Emmy champ Kyle Chandler.

Whishaw co-stars in “Scandal” as Norman Scott, who is the victim of an attempted murder orchestrated by his lover, prominent politician Jeremy Thorpe (played by Hugh Grant). Written by BAFTA winner Russell T. Davies (“Queer as Folk,” “Doctor Who”) and directed by  Oscar nominee Stephen Frears (“The Grifters,” “The Queen”), the three-part series certainly had an impressive pedigree, and Whishaw has already been awarded for his performance by the Golden Globes and Critics’ Choice Awards.

But “Catch-22” wasn’t eligible at those awards since it didn’t premiere until this May. The Hulu adaptation of the classic novel is set during World War II and features Clooney and Chandler in showy performances as often buffoonish military commanders. Clooney has an Emmy IOU to cash in since he never won for his work on “ER,” and Emmy voters might be doubly impressed by him since he is also a producer and director of the series.

Meanwhile, Chandler is a proven Emmy favorite. He was a surprise Best Drama Actor winner for the final season of “Friday Night Lights,” and then he was nominated twice more for his role on “Bloodline.” This more comic performance is a marked change of pace for the dramatic actor, so he may stand out from his rivals.

SEEGeorge Clooney (‘Catch-22’) on why he originally said ‘F— no!’ to Hulu limited series [WATCH]

But that leaves three Experts who are going out on a limb. Gold Derby’s own Tom O’Neil says Clooney will prevail, while Ben Travers (IndieWire) says it will be Chandler. Our last Expert, Anne Thompson (IndieWire) is currently going out on a limb for Paul Dano (“Escape at Dannemora”), who ranks fourth in our overall odds. Can Whishaw maintain his momentum, or will “Catch-22” catch him off guard?