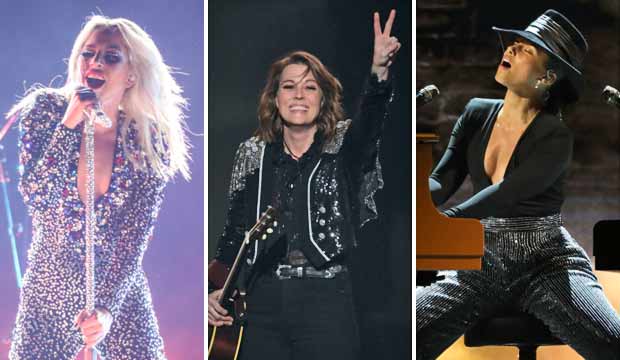 The Grammys are only as good as their performances, which is to say the 2019 Grammys were pretty great. That’s what I thought, anyway. What often feels like an awkward mash-up of artists trying to figure out why they’re on stage together coalesced into a pretty terrific blend of legendary artists and newcomers, with lots of high points and very few disappointments. What did you think? Vote below to let us know who you thought gave the best performance of the night.

At their best, the Grammy Awards can be a platform for heretofore unknown or under-known artists to make a name for themselves on music’s biggest platform — Grammy performances have helped make stars out of Ricky Martin and Kendrick Lamar, among many others over the years. And first-time nominee H.E.R. made great use of that opportunity with her intimate, impactful performance of “Hard Place.”

So did Brandi Carlile, who has been making music for years but hasn’t had a turn in the spotlight quite like the one she got on Grammy night. There was nothing fussy about her performance of “The Joke,” which was nominated for Record of the Year and Song of the Year, just a raw, undeniably emotional vocal performance with her lyrics displayed behind her.

SEEEGOT watch: Hugh Jackman wins Grammy for ‘The Greatest Showman,’ is just an Oscar away from grand slam

Kacey Musgraves also impressed, not once but twice. She excelled in a stripped-down rendition of her song “Rainbow” from her Album of the Year-winning “Golden Hour,” and then she delivered again in a tribute to Dolly Parton that was surprisingly effective. I say “surprisingly” because the Grammys are typically hit-and-miss when it comes to assembling artists to sing songs they may not be artistically well-suited for, but the joined forces of Parton, Musgraves, Maren Morris and Little Big Town made the performance a winner. Only Katy Perry felt out of place in the medley.

Lady Gaga‘s performance of “Shallow” was also a surprise. Singing it without Bradley Cooper, who was off in the UK accepting a BAFTA Award for their film “A Star is Born,” she turned the love ballad into a rock extravaganza that frayed the edges of the romantic song while staying true to it.

Even the show’s host got in on the action with Alicia Keys singing a medley of just about every song in recent memory, proving that there’s no one whose music doesn’t sound good coming out of her mouth. But don’t take my word for it. Vote below. Who gave your favorite performance on Grammy night?