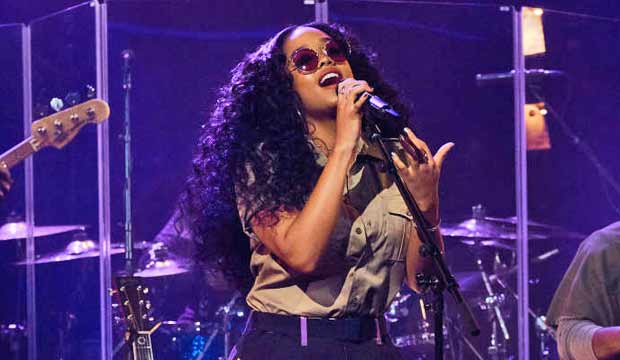 The Grammys love solo women in the race for Best New Artist, but R&B women have gotten short shrift so far in the 21st century. No R&B female artist has won the category since Alicia Keys in 2002 — that was 17 years ago. But that drought could end this year thanks to H.E.R., who exceeded our expectations with five total nominations and now could be one of the biggest winners of the year.

H.E.R. was on the bubble in our Grammy nomination predictions for Best New Artist; we ranked her ninth, which would have put her just out of contention. But not only did she get that nomination, she also came out of nowhere with a bid for Album of the Year for her self-titled compilation. And she has three other nominations in genre categories: Best R&B Performance (“Best Part”), Best R&B Song (“Focus”) and Best R&B Album (“H.E.R.”).

Because of that nominations windfall, H.E.R. has gone from underdog to front-runner. According to the predictions of more than 1,000 Gold Derby users thus far, she’s now ahead to win with leading odds of 9/2. She’s backed by a majority of Gold Derby Editors who cover awards year-round, the Top 24 Users who got the highest scores predicting last year’s Grammy winners and the All-Star Top 24 who got the highest scores when you combine the last two years’ results.

Her Album of the Year nomination makes H.E.R. the only contender for Best New Artist who contends in another general field category. It’s usually the case that the artist with the most support in the top four races tends to win the New Artist prize, as was true for Adele (2009), Bon Iver (2012), Fun (2013), Sam Smith (2014) and Alessia Cara (2018) in recent years. So H.E.R. will enter the February 10 awards ceremony with a major statistical advantage. History is on H.E.R. side.