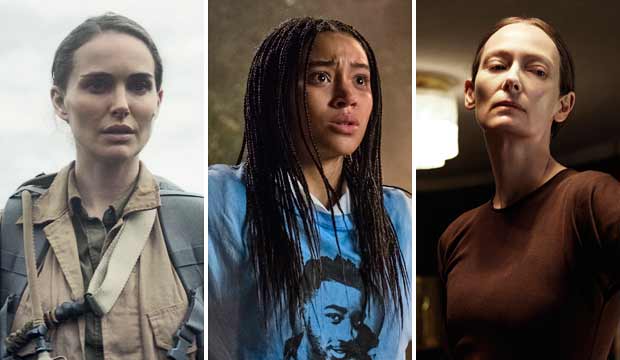 The time for you to pick nominees for the 2019 Academy Awards just started on January 7, and you’ve only got a week before voting closes next Monday on January 14. You’ve already spent the last few months juggling screenings, luncheons, receptions, and trying to remember how to switch the input on your TV to access your DVD player for all those screeners. But I’d be remiss if I didn’t take this opportunity to suggest a few underdog actors and films you should consider if you haven’t already.

Or if you’re really pressed for time and can’t pop in any more DVDs, you could just take my word for it and vote for these contenders anyway. I won’t tell anyone.

This was a strong year for stories about fathers and daughters, and this was my very favorite. Fisher is probably already on your radar for her expressive-beyond-her-years performance given her Golden Globe nomination, Critics’ Choice nominations, Spirit Award nomination and Gotham Award win, but I hope you also paid attention to Hamilton as her dad; his empathetic turn as a father trying his best to reach out to a daughter he doesn’t fully understand is crucial to the film’s effect. Their scene together by a fire is the heart of the film — I dare you not to cry.

Speaking of fathers and daughters, this is another dynamic duo worthy of your attention. Stenberg is a revelation as a teenage girl awakening to racism and police brutality (her megaphone scene during a protest late in the film hits you like a stun grenade). And veteran actor Hornsby brings a careful balance of toughness and tenderness to a man who will protect his children at all costs but knows how much grit those children will need to survive in an poor black community.

SEE‘The Hate U Give’: Amandla Stenberg and Russell Hornsby tell NYC awards voters, ‘The film is an agent of change’ [WATCH]

Noticing a trend here? With “Leave No Trace,” you could make it a triple feature of father-daughter movies. This one is about an army vet with PTSD raising a teenager out in the woods. He’s unable to adapt to civilian life, but she needs more stability than he can offer her. It’s from director Debra Granik, who also made “Winter’s Bone” (2010). That film was nominated for Best Picture, and this one is just as good. Foster and McKenzie express the depth of their relationship, thoughts, fears and needs often without words, and their last scene together is a subtle heart-breaker.

Cooke is best known for playing likable roles in “Bates Motel,” “Me and Earl and the Dying Girl” and “Ready Player One,” which makes it even more impressive how well she plays a teenage girl with no empathy at all. But even though she plays a would-be murderer with no emotions, Cooke makes her complex, and her cunning intelligence even makes her — yikes! — kind of empowering.

This film just won Best Picture from the National Society of Film Critics — well deserved. It plays like a duet between director Zhao and lead actor Jandreau; the filmmaker tells a whole story in closeups of his face about a young rodeo star who is injured and struggles to understand who he is without the horseback riding that gave him so much of his identity. The performance and filmmaking are even more impressive when you realize that Jandreau is playing a version of himself in a story inspired by his own life.

Garland earned an Oscar nomination for writing “Ex Machina” (2014), but I think this movie is even better. It was released in February 2018, right in the middle of the box office bonanza that was “Black Panther,” so it was somewhat overlooked at the time, but this gratifyingly female-driven sci-fi thriller about a rescue mission into a mysterious energy field is beautiful, weird, uneasy and transfixing.

Love it or hate it — and I’m sure a lot of you hate it — “Suspiria” contains a Tilda Swinton performance that’s a lot like past Tilda Swinton performances in that it’s audacious and unlike anything you’ve seen. She plays the artistic director of a dance company. She’s also disguised in prosthetic makeup to play an elderly male psychiatrist. And she plays a third role as a monstrous witch. She won an Oscar 11 years ago for “Michael Clayton” (2007); since then she has given many standout performances, so it’s shocking that she still hasn’t gotten another nomination.

Toni Collette has rightly been praised for her a role as a grieving woman enduring mysterious supernatural occurrences after the death of her mother. But Wolff is just as important to the effect of the film, especially in the second half when he’s swirling with guilt and terror as the supernatural disturbances begin to focus around him. He’s so intense that you hope director Ari Aster checked in on the poor guy between takes.

SEEAlex Wolff (‘Hereditary’): ‘I had to really go through hell’ in playing Peter [Complete Interview Transcript]

Henry had a great 2018 with a Tony nomination for “Lobby Hero,” an Emmy nom for “Atlanta” and film roles in “White Boy Rick,” “Widows” and “Spider-Man: Into the Spider-Verse.” But the one I think he deserves Oscar consideration for is “Beale Street,” where he plays a man recently released from prison. It’s a relatively brief performance — about 12 minutes long — but his big scene, in which he describes the terror inflicted on black men by the criminal justice system, is the emotional and thematic connective tissue of the whole movie.