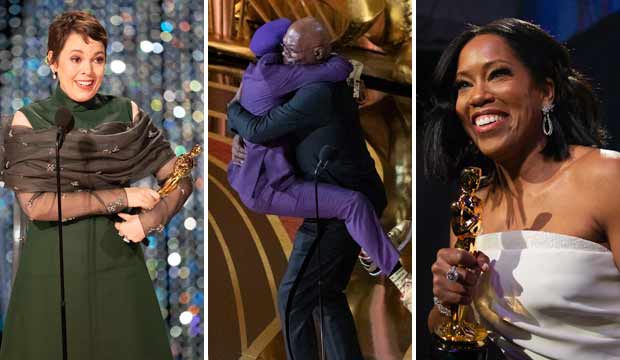 Well, another Oscars is in the books! The 91st edition of the kudosfest featured a wide variety of speeches from winners. Some were eloquent and touching like Best Supporting Actress winner Regina King. Others served as a call to action like Best Adapted Screenplay victor Spike Lee and Best Documentary Short winner Melissa Berton. Others were just completely flabbergasted like Best Actress champ Olivia Colman. Here’s a look at the six speeches that stood out the most during this year’s ceremony.

Colman had the same stunned reaction that most of us had when she beat Glenn Close (“The Wife”) with her performance as Queen Anne. It was actually quite similar to Close’s surprised reaction when she won at the Golden Globes. When Colman finally collected herself she said, “It’s genuinely quite stressful. This is hilarious. I got an Oscar!” She then recognized Close in the audience and endearingly said, “Glenn, you’ve been my idol for so long, and this is not how I wanted it to be, and I think you’re amazing, and I love you very much.” She then added a very funny note to her children, “My kids are at home watching. And if you’re not then kind of well-done, but I sort of hope you are. This is not going to happen again.” She closed on a touching note describing how she worked as a cleaner and only dreamed that something like this could happen.

Regina King’s was the first speech out of the gate since her category was presented first, but she set the bar incredibly high. First she paid tribute to the mind that birthed the film’s story, James Baldwin, and the film’s writer/director, Barry Jenkins, recognizing him for giving the film his love and support. Then she delivered the beautiful line, “So it’s appropriate for me to be standing here because I am an example of what happens when support and love is poured into someone.” She also gave a beautiful tribute to her mother, who was crying right along with her, and gave a beautiful nickname to her fellow nominees: “my sisters in art.”

Spike’s delivery of his speech wasn’t the best, but there were other aspects that made the win memorable. First was presenter Samuel L. Jackson‘s face when he realized that his old friend had won; that was priceless on its own. But then you had Lee’s triumphant walk to the stage where he not only hugged his old co-star but literally wrapped his legs around the man! Lee’s speech ended with a great moment when he implored people in the 2020 presidential election to “do the right thing,” a reference to his infamously snubbed 1989 masterpiece.

“Marvel may have created the first black superhero, but through costume design, we turned him into an African king!” Carter spoke those words after becoming the first black costume designer ever to win this category. She then gave the academy a special shout-out when she said, “Thank you for honoring African royalty and the empowered way women can look and lead on screen.” She closed her speech by giving credit to her mother “for teaching me about people and their stories. You are the original superhero.” A fitting speech for a landmark accomplishment. Now let’s just hope that it’s not another 91 years before another black woman gets the chance to win this category.

Shi accepted the Oscar for her tribute to her Chinese-Canadian parents by recognizing those who might need some moral support themselves: “To all of the nerdy girls out there who hide behind their sketchbooks, don’t be afraid to tell your story to the world.” That line alone made the speech worthy of this list. She continued, “You’re going to freak people out, but you’ll probably connect with them too, and that’s an amazing feeling to have.” Neiman-Cobb also got a good line in when she talked about making a short about being a mother as she was becoming one herself and dedicated the award to her little “bao,” Lucy. That was sweet.

Zehtabchi started her speech with a funny line, saying, “I’m not crying because I’m on my period or anything.” The 25-year-old who made the short about women in India fighting to remove the stigma of menstruation then thanked the crew that helped make the movie for helping to fight for “menstrual equality.” Berton then added, “This film began when high school students here and our very partners at Action India wanted to make … a human rights difference.” She closed her speech with an amazing sentiment: “I share this with teachers and with students around the world. A period should end a sentence, not a girl’s education!”