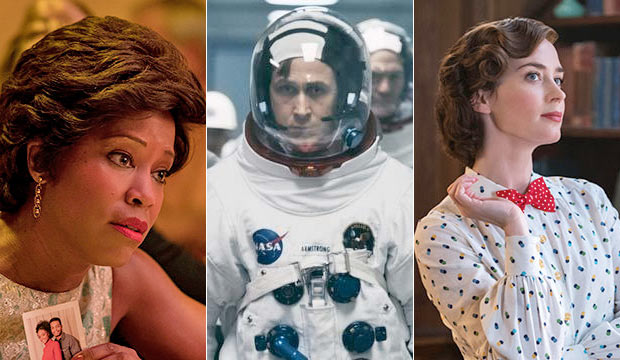 Annapurna and Universal and Walt Disney

When the 2019 Oscar nominations were announced earlier this week, eight movies were sitting pretty as this year’s Best Picture nominees: “BlacKkKlansman,” “Black Panther,” “Bohemian Rhapsody,” “The Favourite,” “Green Book,” “Roma,” “A Star Is Born” and “Vice.” But which film likely came in ninth place? The Academy Awards changed the number of Best Picture nominees to be between five and 10 back in 2011, with nine being nominated the past two years. Of this year’s notable also-rans, vote in our poll below to let us know which film YOU think was #9 on Oscar voters’ ballots.

Based on Gold Derby’s racetrack odds, “If Beale Street Could Talk,” “First Man” and “Mary Poppins Returns” just missed out on earning Oscar noms for Best Picture as they came in ninth place through 11th place, respectively. In terms of the film-by-film breakdown of nominations, “First Man” and “Mary Poppins” earned four bids apiece while “Beale Street” came in with three bids.

“First Man” stars Ryan Gosling as Neil Armstrong, the first man to walk on the moon, and features Claire Foy as his wife Jane. While Damien Chazelle‘s biopic was a one-time favorite to earn a Best Picture nomination and a front-runner to win Best Score, it ultimately had to settle for just four craft bids: Best Production Design, Best Sound Editing, Best Sound Mixing and Best Visual Effects.

“Mary Poppins Returns,” a sequel of the landmark 1964 musical, also scored four below-the-line nominations: Best Costume Design, Best Production Design, Best Score and Best Song (“The Place Where Lost Things Go”). While a Best Picture citation was a possibility, many thought that snubbed Best Actress contender Emily Blunt was essentially a lock for her portrayal of the magical nanny.

The other films to earn a trio of Oscar nominations were “The Ballad of Buster Scruggs,” “Can You Ever Forgive Me?” and “Cold War.” Meanwhile, three other narrative movies walked away with a pair of bids apiece: “Isle of Dogs,” “Mary Queen of Scots” and “Never Look Away.” Be sure to vote in our poll to let us know which of these nine films likely came the closest to earning a Best Picture nomination.