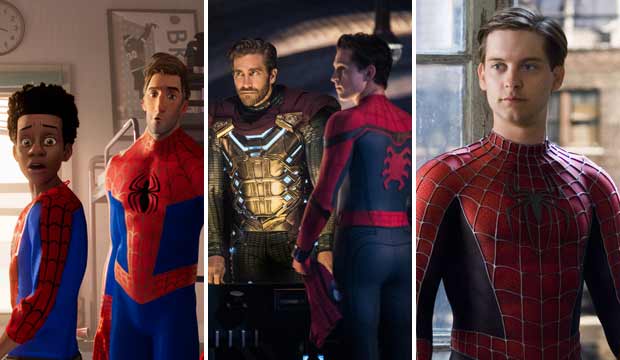 “Spider-Man: Far From Home” opened to strong reviews last week, earning a 91 percent freshness rating on Rotten Tomatoes. That makes it one of the top 10 movies in the Marvel Cinematic Universe as measured by that critical aggregator (tied with “Guardians of the Galaxy” for seventh place). But how do you think it compares to the “Spider-Men” who have come before? Scroll down to vote in our poll at the bottom of this post and to click through our gallery of every Marvel Cinematic Universe movie ranked based on their RT scores.

Then, at long last, the Sony-owned franchise struck a deal with Disney to incorporate Peter Parker into MCU. Tom Holland landed the role and made his debut as our friendly neighborhood Spider-Man in “Captain America: Civil War” (2016). He headlined his own solo film in with “Spider-Man: Homecoming” (2017) and now “Far From Home.” And let’s not forget his appearances in “Avengers: Infinity War” (2018) and in April’s “Avengers: Endgame.”

So that makes seven live-action “Spidey” films. The eighth came last winter in the form of the animated “Spider-Man: Into the Spider-Verse,” which came out of nowhere to become one of 2018’s most critically acclaimed films of any genre. It won Best Animated Feature at the Oscars, which made it the hero’s first win at the Academy Awards since “Spider-Man 2” claimed Best Visual Effects 14 years earlier. That’s a lot for “Far From Home” to live up to. Does it stand head-and-shoulders above the rest, or do you think one of the other seven films made a better impression? Vote below.