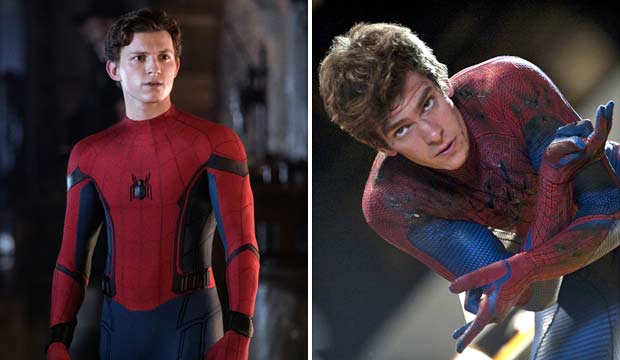 “Spider-Man: Far From Home” is the best “Spider-Man” movie yet — that’s according to readers who responded to our recent poll about the eight films starring the Marvel Comics web-slinger. I suspect some recency bias contributes to that result since “Far From Home” just opened and therefore was fresh in mind for fans. In a couple of years’ time the result might very well be different, but “Far From Home” was well received by critics and audiences, so even if it were to sink in a later poll, it might not sink too far. Scroll down to see our complete poll results at the bottom of this post.

Our readers were divided, so “Far From Home” came out on top with less than a third (31 percent) of all votes. Two other films followed close behind. Director Sam Raimi‘s “Spider-Man 2” from back in 2004 came in second with 27 percent of the vote with Tobey Maguire playing the title role and Alfred Molina inhabiting one of the franchise’s best villains, Doctor Octopus. And close behind that with 24 percent support was last year’s animated film “Spider-Man: Into the Spider-Verse,” which is arguably the most critically acclaimed “Spidey” movie in history — and an Oscar winner to boot.

There was a steep drop-off after that. The original “Spider-Man” from 2002, whose record-breaking box office may be largely responsible for launching the current era of superhero blockbusters, got 8 percent of the vote. Meanwhile, 7 percent thought Tom Holland‘s first outing, “Spider-Man: Homecoming” (2017), was the cream of the crop.

Three films bring up the rear with 1 percent each. The oft-maligned “Spider-Man 3” (2007) the last in Raimi and Maguire’s original trilogy, placed sixth. It finished just a few votes ahead of Andrew Garfield‘s first effort, “The Amazing Spider-Man,” while Garfield’s “Amazing Spider-Man 2” (2014) was dead last. But don’t feel too bad for Garfield; he earned his first Oscar nomination for “Hacksaw Ridge” not long after he relinquished his Spidey suit. Not a bad parting gift.

SEE‘Spider-Man: Far from Home’ swings into box office history: Marvel not running out of gas just yet

So here’s how all eight movies stacked up in our polling. Do you agree with this order? Which films do you think our readers overrated or underrated? 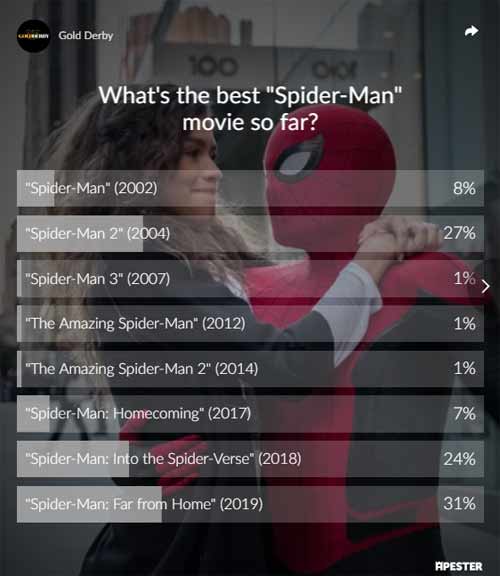