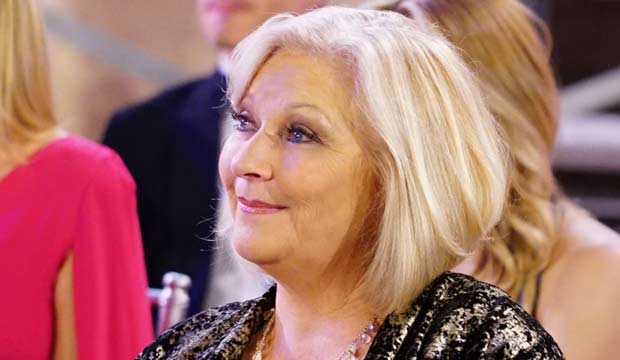 Beth Maitland has played Traci Abbott on “The Young and the Restless” on and off for the last 37 years, and she won Best Supporting Actress at the Daytime Emmys for it back in 1985. But would you believe that was her only nomination? She finally picked up a second bid in 2019 in the same category. So can she make it two-for-two when winners are announced on Sunday night, May 5?

These awards were decided by blue ribbon panels viewing sample performance reels from each of the actors. Those reels were made available for the press, so here’s what you need to know about Maitland’s submission.

Synopsis: The reel opens with Traci heartbroken that her Alzheimer’s disease stricken mother Dina seems to be forgetting her faster than she’s forgetting Traci’s siblings Jack (Best Actor nominee Peter Bergman) and Ashley (Eileen Davidson). Traci lashes out at her brother and sister for their constant feuding. Then Traci urges her sister to “fix it” — repair the rift between her and Jack for the sake of the family. Ashley admits that even though she and Jack are currently fighting she still loves their brother.

The following scene features Traci at a public event honoring her deceased daughter Colleen. She gives a speech announcing a scholarship in Colleen’s honor and then speaks to one of Colleen’s old friends, JT (Thad Luckinbill), who tells Traci that Colleen would be ashamed of him for the mistakes he has made lately.

Traci is next shown speaking with her nephew Kyle (Michael Mealor), thanking him for being their for Dina in her time of need. Then she gathers the family to once again try to heal the rifts between them all and remind them “what it means to be an Abbott.” Next is a one-on-one in which Traci urges Jack to run the family business with Ashley as their father would have wanted, and Traci admits that she always felt their father favored Ashley over her.

Pros: This is a deeply sympathetic reel in which Traci struggles to keep her family together while also feeling like the forgotten child among her siblings, which she felt even before their mother’s Alzheimer’s. Maitland gets to be tearful, angry, tender and warm, giving this reel plenty of emotional impact. And since this is Maitland’s first nomination in 34 years, voters may feel the actress has been just as undervalued as Traci has been by her relatives.

Cons: Traci spends most of these scenes reacting to other characters’ storylines, so she doesn’t get an opportunity to shine in her own spotlight. Also, Maitland is one of only five acting nominations for “Y&R” this year, which indicates that this year’s judging panels just didn’t respond to the show as strongly as they did to “General Hospital” and “Days of Our Lives,” so perhaps one of the four actors in this category from those two shows may win instead.