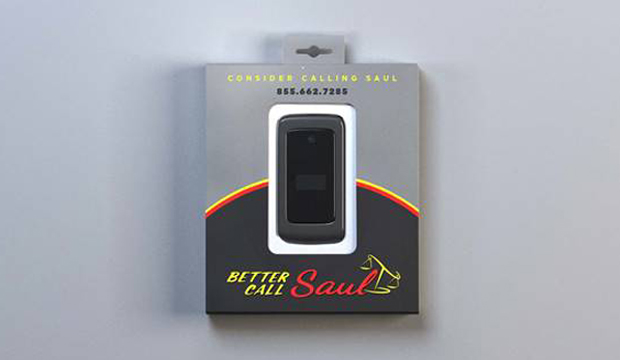 In honor of “Better Call Saul’s” fourth season, AMC is sending out a slick new Emmy FYC mailer this week to TV academy members in the shape of — what else? — a burner phone. When Emmy voters explore the package they’ll find four DVDs containing all 10 episodes from Season 4, in addition to a phone number (855-662-7285) that connects them to the personal voicemails of six of the show’s most popular characters. When I called the number, the gruff voice of Mike Ehrmantraut (Jonathan Banks) harrumphed that he couldn’t answer the phone because he’s “on a job at the Emmys” — but it’s random for each user. See exclusive photos above and below.

Here’s the full transcripts for all six characters’ voicemails:

Mike Ehrmantraut: “Ehrmantraut. Security Consultant. I’m on a job at the Emmys. You know how they say it’s been a pleasure? It hasn’t. (beep)”

Saul Goodman (Bob Odenkirk): “Greetings, Emmy voters! If you’re wondering what this world’s coming to, the short answer is, so am I. That said, if anyone offers you cash for your Emmy support—even a measly two hundred dollars, like I’m holding in my hands right now—then we should talk, offline. Remember, you can’t spell ‘EMMY’ without M-E…that’s me, Saul Goodman! (beep)”

Gus Fring (Giancarlo Esposito): “Hello, you have reached Gustavo Fring at the offices of Los Pollos Hermanos. I am away from the phone right now, tending to…other matters. If you are interested in placing a catering order for your Emmy watch party, then I will return your call as soon as possible. You’re in good hands. (beep)”

Ignacio “Nacho” Varga (Michael Mando): “This is Nacho Varga at A-Z Fine Upholstery. We’re currently scheduling repairs for all your limousine interior needs—just in time for the Emmys. If you need help with anything ELSE, try my cell. (beep)”

Howard Hamlin (Patrick Fabian): “Hello! You’ve reached the mobile office of Howard Hamlin. I’m sorry I can’t answer your call right now, I’m currently assisting the accountants of Ernst & Young for the 2019 Emmy Awards. There will be no snafus this year! (beep)”

Season 4 of “Better Call Saul,” which aired August-October 2018 on AMC, received some of the best reviews yet at Metacritic. Memorable plot points this season included Saul dealing with the death of his brother Chuck (Michael McKean), Kim and Saul growing closer as both colleagues and lovers, Saul beginning a dangerous side job selling burner phones, and Gus and Mike furthering their interests by creating a meth lab underneath a laundromat.

AMC is submitting seven actors on the 2019 Emmy ballot: Odenkirk in lead, Seehorn, Banks, Esposito, Mando and Fabian in supporting, and McKean in guest. Odenkirk is a three-time Emmy nominee in Best Drama Actor (2015-17) for playing Jimmy McGill/Saul Goodman, while Banks has been nominated three times for “Better Call Saul” (2015-17) and once for “Breaking Bad” (2013) for this same role in Best Drama Supporting Actor.

A prequel to “Breaking Bad,” “Better Call Saul” has so far received three Emmy nominations as Best Drama Series (2015-17). The show’s lengthy hiatus made it ineligible at last year’s 2018 Emmys, but it’s back in full force for this 2019 cycle.