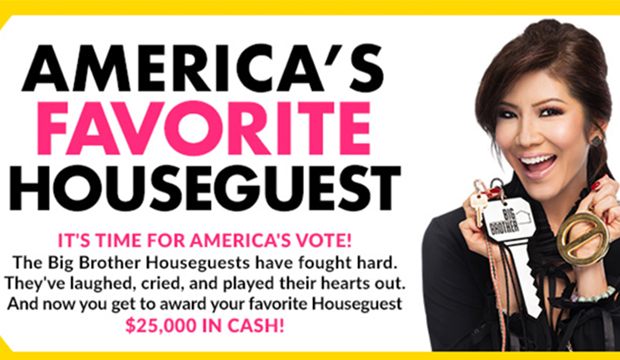 Just nine people will decide who wins “Big Brother” 21 on Wednesday, September 25 during the live 90-minute finale. We know the #BB21 winner will be one of the Final 3 — Holly Allen, Nicole Anthony and Jackson Michie. Loyal fans of the reality show can only watch from the sidelines as the Final 2 houseguests make their respective cases to the jury.

We’ve been watching the live feeds and have all the “Big Brother” spoilers, including who is the Final 2 and which of them is likely to win #BB21. We know who won Part 2 of the Final Head of Household competition and will join Jackson in Part 3, which will take place during the live finale on Sept. 25

SEE ‘Big Brother 21’ spoilers: September 25 episode will include Final 2 and we know who will win #BB21

Who do you want to win “America’s Favorite Houseguest” on Wednesday? Be sure to cast your vote in the poll below and then sound off in the comments section.

Be sure to make your predictions to influence our racetrack odds. You can keep changing your predictions until just before the finale airs on CBS. You’ll compete to win a spot on our leaderboard and a $100 Amazon gift card. See our contest rules and sound off with other fans in our reality TV forum. Read more Gold Derby entertainment news.