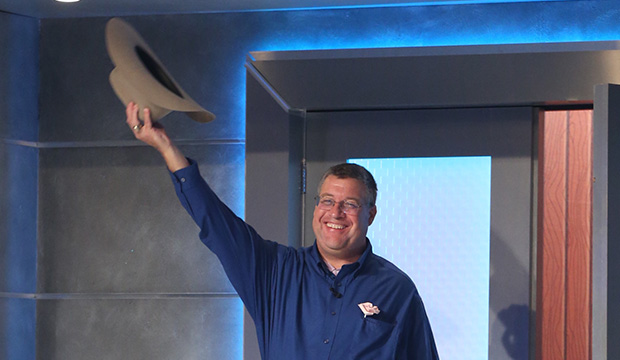 Cliff Hogg III had been striking deals left and right all summer on “Big Brother 21,” but his wheelin’-and-dealin’ wasn’t enough to get him into the final three. Or maybe it was his downfall?

After last week’s vote drama that nearly kept Tommy Bracco in the house, Jackson Michie was done with Cliff and Nicole Anthony, unbeknownst to Cliff, who continued to hatch a handful of agreements to secure safety: asking Holly Allen to throw the HOH and Veto in exchange for her staying, then giving her “permission” to compete in Veto provided she takes him to final three if she wins; and shaking on a final three and two deal with Jackson. The most head-scratching part was when Cliff clarified to Jackson that their final two deal only meant Jackson would have to take him to final two because Cliff would take Nicole. It’s a moo point, though, because Jackson was never planning on honoring them, especially after he won Veto.

Cliff tried the best he could to sway Jackson, including threatening jury votes, but there was no way he was booting his showmance, and so Boss Hogg fell one step short of finale night.

Check out our exit interview, via email, with Cliff below to get his thoughts on his biggest faux pas and why he never thought Jackson would evict him.

SEE ‘Big Brother 21’ spoilers: The Part 1 winner of the final HOH is…

Gold Derby: What do you feel was your biggest mistake this week and why?
Cliff: Looking back, keeping Holly had to be my biggest mistake. I feared Tommy as a competitor, I did have an alliance with Michie and Holly I was reluctant to break, but I have paid the price for allowing a showmance to make it to final 4.

Gold Derby: Before Nicole told you and given what happened last week, were you ever worried that Jackson would evict you or were you so sure he’d keep you that you never thought about it?
Cliff: In all honesty, I did think he would keep me until we had reached final 3. Then I wasn’t so sure what he’d do. But I thought I at least had a path to final 3 with Michie.

Gold Derby: You made a lot of deals throughout the game that worked out for you until now. Do you think the success of those deals made you overconfident about your final three and two deals with Jackson? Why or why not?
Cliff: That is probably valid. I did get into the habit of making deals and surviving week after week. In the end, I probably made one or two deals too many.

Gold Derby: Jackson fought hard to keep Holly last week. Did that make you suspicious at all that she might be his top priority?
Cliff: Yes. Looking back, that should have raised more alarms with me. But there was a part of me that thought Michie was acting just that upset for [his] image and Holly’s benefit.

SEE ‘Big Brother 21’ spoilers: Jackson and Holly’s final HOH plan was a flop and a success, while Nicole is ‘disgusted’ with herself

Gold Derby: You were always reluctant to evict Holly. Had Holly and Jackson not agreed to those new deals, would you have kept Tommy or would you still have pushed Nicole to keep Holly?
Cliff: I don’t know for certain. Keeping Holly without the agreements, I believe, would have allowed me to make it to the final 3 with the two of them. But being in a final 3 with a showmance wasn’t my preferred situation, but I still don’t know without those deals if I would have gone that direction.

Gold Derby: What do you think Tommy’s reaction will be when you walk in to jury?
Cliff: I hope he understands that I was trying to make the best decision for my game and that it was nothing personal against him. And now I realized that I may have been conned and fooled and I will apologize to Tommy for that.

Gold Derby: How do you think Nicole will do in a final three against a showmance?
Cliff: I am hoping she will do fantastic. I expect there will be a physical challenge and I know she has been studying the memory wall and dates quite a bit, so I hope, in a memory challenge, she stands a good chance to make it to the final competition.

Gold Derby: Where did you hide Orwell?
Cliff: Orwell is hidden in the steps that is used to reach the high cabinet in the storage room. I thought it appropriate to hide him in a place where Michie spends much of his time.