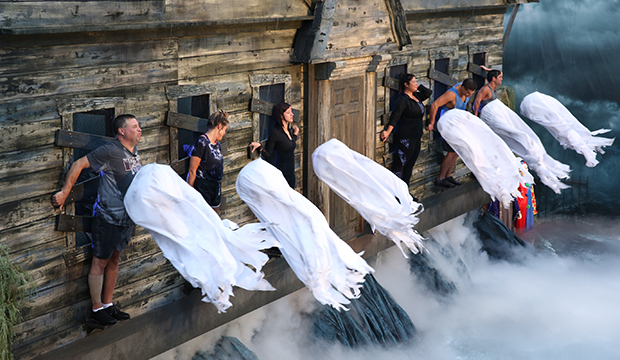 It took 10 weeks, but the double eviction is finally happening on Thursday on “Big Brother 21.” There are seven houseguests left, so we’ll go down to five by the end of the night. Who could be walking out the door without a chance (besides Veto) to fight for their “Big Brother” life?

First, let’s just assume that Jessica Milagros will be the first evictee on Thursday. She’s still on the block, now opposite Cliff Hogg III after Tommy Bracco saved Christie Murphy with the Veto. Jess is Jackson Michie‘s target, which is dumb for a multitude of reasons, but we won’t get into that now. She, Christie and Tommy are trying to flip Nicole Anthony to keep Jess, but it likely won’t happen. So it’s buh-bye for Jess. That leaves six people, who just so happen to fall into three duos: Tommy and Christie, Cliff and Nicole, and Jackson and Holly Allen.

SEE ‘Big Brother 21’ spoilers: Operation Flip Nicole has commenced, but it will probably be a bust

Cliff, Nicole, Jackson and Holly have a final four deal, which Tommy and Christie both suspect. Jackson obviously can’t play in the double eviction HOH, so what will the other five do if they won HOH? Let’s look at all the

Christie
Christie has been telling everyone not named Jackson and Holly that she wants Jackson and Holly out, and she considers her deal with them to keep her from two weeks ago null and void. So the final remaining showmance would definitely go up under her watch, and Jackson would be her target. If either comes down with the Veto, the other will go.

Tommy
Tommy is also on the Target Jolly train, so he would make the same nominees as Christie, but he’s been super wary of Cliff for a while. He even told us during his 3 a.m. hammock talk Tuesday that he thinks Jackson and Cliff are the biggest threats, so we we could see Jackson and Cliff noms from him. This would be risky, though, if breaking up Jolly is the ultimate goal (it’s definitely Christie’s) because Holly could save Jackson with the Veto, which means she’s untouchable as well. But in that case, Cliff would go (no one’s ever voting out Nicole), which would make Tommy very relieved.

Cliff
Cliff has been a dealmaker ever since his HOH was hacked by the threat of Christie’s Panic Power. He will be loyal to the final four of him, Nicole and Jolly, and he has wanted Tommy on the block for weeks, so his noms would be Tommy and Christie. On Wednesday, he and Jackson agreed that Christie would go in that case. If one comes down, the other goes.

SEE ‘Big Brother 21’ spoilers: Tommy is totally onto the new final 4 and has a ‘risky’ plan to flip the vote

Nicole
Like Cliff, Nicole would put up Tommy and Christie — she would’ve done so this week had she won HOH and confirmed again on Wednesday that she would nominate them if she wins HOH next. If one of them comes down, she said she’d put Jackson up. As Jess, Tommy and Christie have been pitching to her to save Jess and target Jolly, Nicole is concerned about Jolly working both sides so Jolly are not the targets. Christie has, yet again, sworn on her sister’s life to Nicole that she and Tommy do not have an alliance with Jolly, which will probably temper any suspicions for Nicole.

Holly
Holly is not a fan of targeting Jess, but she’s gone along with it since Jackson is HOH. They thought they’ve been good with Tommy, inexplicably, and believed they could sit in the middle while Tommy and Christie, and Cliff and Nicole go at each other. But they’re finally realizing that maybe they’ve made a huge mistake keeping Christie/not targeting Tommy earlier. (Lbr, if you still can’t see it after Tommy saved Christie for the second time with the Veto, then we can’t help you.) Holly would also honor the final four deal and put up Tommy and Christie, and since Cliff and Nicole have wanted Tommy out, he would probably leave against Christie, but the latest talks have shifted the target back to Christie. And if one comes down, the other goes.

And just to be a completist, let’s say Jess survives the block somehow and Cliff goes.

Jessica
Jess would nominate Jackson and Holly since she’s working with Tommy and Christie, and remains blind to Christie’s wiles. She hasn’t been shy about targeting the dudes all season long, but Tommy would be the only other guy left, so she wouldn’t nominate an ally. Plus, her target would be Jackson, so she can still get a guy out. Jess’ entire campaign is centered around going after Holly and Jackson, and she told Nicole she’s willing to be a pawn to ensure one of them goes home. Nominating Nicole would be stupid, even for Jess, since Jess staying means Nicole flipped, but nothing makes sense with this cast.

So basically, assuming Jess leaves, Tommy and Christie are in trouble if Holly, Cliff or Nicole wins HOH. And Holly and Jackson are in trouble if Tommy or Christie wins HOH, with Cliff possibly in the danger zone with Tommy. Since it would be a 3-2 face-off, Cliff, Nicole and Holly have the advantage on paper to win HOH, but it’s likely a quick crapshoot comp, which means anyone can prevail. Besides, Cliff hasn’t won anything since his HOH and Nicole has won precisely nothing, so you could argue it’s all on Holly here to keep their quartet safe.

The only guarantee, or as close to a guarantee you can get in this game, is that Nicole won’t get evicted in any of these scenarios. Absolutely no one is going after her, and she really is the perfect person to sit against in the final two, so no matter what happens on Thursday, Nicole stans should be feeling good.