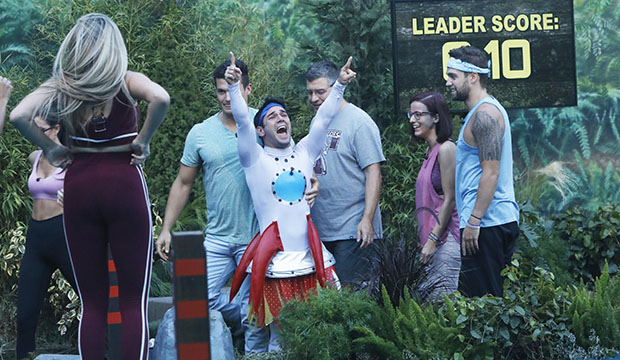 With last week’s eviction of Jack Matthews, the Six Shooters are officially no longer a thing on “Big Brother.” The remaining five alliance members — Tommy Bracco, Christie Murphy, Jackson Michie, Holly Allen and Analyse Talavera — tried reconciling last week but Michie wanted nothing to do with them. Now that Tommy is the Head of Household, did he nominate Michie for eviction? Or did he instead put up two people from the other side of the house (Jessica Milagros, Cliff Hogg, Kathryn Dunn and Nicole Anthony)? And which three players did viewers vote for to compete in the America’s Field Trip competition?

SEE‘Big Brother 21’ spoilers: Tommy’s target may not be who you’d expect

Below, check out our minute-by-minute “Big Brother” recap of Season 21, Episode 21 to find out what happened Sunday, August 11 at 8/7c. Then be sure to sound off in the comments section about your favorite houseguests on CBS’s reality TV show, who annoys you the most and who you think will ultimately join the “Big Brother” winners list. Keep refreshing/reloading this live blog for the most recent updates.

8:00 p.m. — “Previously on ‘Big Brother’!” In Thursday’s 20th episode, Jack was evicted by a 6-2 vote over Michie, with only Analyse and Christie voting against Michie. Jack was then given the chance to explain all of his controversial statements to Julie Chen Moonves in what can only be described as the most awkward exit interview ever. Tommy went on to win the Head of Household competition — on his birthday no less — and continued celebrating until the cameras stopped rolling. Who will Tommy nominate for eviction tonight? Let’s go!

8:10 p.m. — Fresh off his HOH win, Tommy is determined to bring the remaining members of the Six Shooters alliance back together and stronger than ever. Michie has previously said he no interest in working with them so he’ll have do some backpedaling. If the alliance does reunite, Jessica has a lot to worry about after handing Jack the first key to the jury house. Cliff expects himself and Michie to go on the block, but Kat is concerned for herself considering Tommy tried to flip the house against her a week ago. Michie goes to talk with Tommy and learns that, at this point, Tommy wants to keep the (Five?) Shooters safe this week.

8:20 p.m. — Christie walks in on Tommy dancing around in his briefs and asks what he’s thinking. Tommy wants to nominate Kat and Cliff with the hopes Kat will be evicted. He also tells Christie to act like the Shooters are still fighting so nobody suspects they have the numbers. Christie agrees that Kat is dangerous to keep in house with Holly, but they have to ensure they have the votes to evict her. She’s played an amazing social game and is generally good at competitions. Next, Cliff pleads his case to Tommy and guarantees his loyalty. Tommy says if Cliff is nominated this week, he’s not the target. Downstairs, Kat is telling Michie that she’s screwed. She hasn’t worked with Christie or Tommy and eventually her frustration leads to tears. Next, Kat goes to speak with Tommy and tells him she wouldn’t target him, which is a lie. She’s willing to lie to save her game at this point. Kat says she’s heard that the Shooters are getting back together, which Tommy denies. Kat can tell instantly that he’s lying and Tommy still doesn’t trust Kat.

8:30 p.m. — The houseguests learn that viewers have been voting to send three of them on “America’s Field Trip.” The three players chosen will take part in a competition that will leave one of them with safety for the week, one with a punishment and one on the block as a third nominee. The three houseguests chosen were Michie, Analyse and Christie. Michie is aware that America probably didn’t vote him into the competition because they love him, but he doesn’t care. Christie is mortified, thinks America hates her and bursts into tears. Holly and Michie are thrilled that Christie could end up on the block and be sent packing during her best friend’s HOH reign. Upstairs, Analyse tells Tommy and Christie that she’s willing to throw the competition to keep Christie in the game. They feel confident that Analyse wouldn’t be voted out, but Christie is definitely in danger.

8:45 p.m. — It’s time for “America’s Field Trip” competition! Unfortunately for Analyse, Christie and Michie, they don’t actually get to leave the house. They’re in the backyard like any other competition while the other houseguests watch from the living room. In this competition, players have to maneuver eggs through caging wire with their fingers, then place the egg on a ramp and roll it down to letters that spell “SAFE.” The first player to knock down each letter of the word “SAFE” will win. Analyse is already planning to throw it, but if was smart she would do her best in case Michie is terrible at the game. Wouldn’t it be better for her if Michie was on the block instead of her? As the game continues, they talk about the fact that America must hate them. Christie seems to be the only one bothered by it. Michie ends up winning in a landslide! He is safe for the week. Analyse is trying to throw it, but Christie is so terrible that Analyse loses patience and decides to try. Analyse gets second place and Christie will be on the block this week. Wow! Christie bursts into tears once again.

8:55 p.m. — Michie and Holly are celebrating with a makeout session in the pantry. Cliff is thrilled that Christie is on the block and sees this as a great opportunity for them to take a shot at her. Up in the HOH room, Analyse apologizes but Christie was just too awful at the game. Christie is sobbing while Analyse, Tommy and Nick console her. Nick pledges that if he wins the Veto he will save Christie. He’s been playing both sides, but moving forward he wants to work with Christie, Tommy and Analyse. Later, Analyse receives her punishment. She has to wear a chicken costume for an entire week. Up in the HOH room, Kat goes to make another offer to Tommy. She says that if she’s on the block, she won’t be able to vote. If Tommy keeps Kat off the block, she promises she won’t vote to evict Christie. That’s a solid game move, Kat! In the Diary Room, Kat does confess that she may actually vote to evict Christie. She’s telling Tommy what he wants to hear and she’ll worry about the logistics later.

8:59 p.m. — It is now time for the Nomination Ceremony. As HOH, Tommy has decided to nominate Cliff and Kat for eviction. They will join Christie on the block and will have to fight it out in the Veto competition. Kat immediately starts crying, but Cliff thinks he has enough votes to send Christie packing. We’ll find out who wins the Veto on Wednesday’s episode of “Big Brother.”