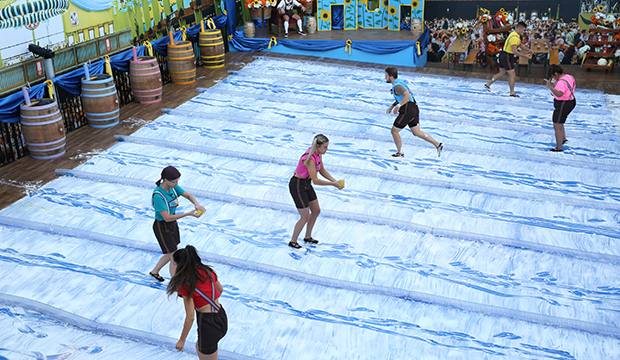 Last week on “Big Brother,” Kathryn Dunn was evicted by a near-unanimous vote over Cliff Hogg following a tumultuous few days in the house. Basically, Cliff’s Angels (Kat, Jessica Milagros and Nicole Anthony) believed that Cliff’s six-person deal with Tommy Bracco, Christie Murphy, Nick Maccarone, Analyse Talavera and Nicole was akin to selling his soul to the devil, since it meant Jessica wasn’t included. With an endurance Head of Household competition on the line, all eyes were now on who’d fill up their beer keg the fastest. So how’d it all play out on Sunday night?

SEEKathryn Dunn (‘Big Brother’ 21) eviction interview: Why did she confront Cliff Hogg? Where did her true loyalties lie?

Below, check out our minute-by-minute “Big Brother” recap of Season 21, Episode 24 to find out what happened Sunday, August 18 at 8/7c. Then be sure to sound off in the comments section about your favorite houseguests on CBS’s reality TV show, who annoys you the most and who you think will ultimately join the “Big Brother” winners list. Keep refreshing/reloading this live blog for the most recent updates.

SEE‘Big Brother’s’ hottest showmances: 7 couples that are still together (and 13 that split)

8:00 p.m. — “Previously on ‘Big Brother’!” In Thursday’s 23rd episode, Cliff took a deal that put him in a shiny new final six, but left Jessica out in the cold. The plus-size model did her best to try to rally support from newly minted outcasts Jackson Michie and Holly Allen, but it seemed too little, too late. After Kat’s eviction the houseguests took part in a classic slip ‘n slide challenge to determine who’d become the next HOH. Will Cliff’s new group of six prove victorious? If so, will Michie and Holly be nominated as the last remaining romantic couple? Let’s go!

8:25 p.m. — Lines have been drawn in the sand and this HOH is more intense than ever. Holly and Michie feel like their backs are against the wall and they must win. Christie also feels the pressure because she’s completely paranoid (and rightfully so). In a flashback, we see Jess confront Analyse about the new final alliance of six and Analyse flat out denies it. To get in an extra dig, Jess tells Analyse that people (particularly Holly) think she’s been flirting with Michie. Now Analyse is pissed and runs to tell Christie. “If I wanted Jackson, I could have had him,” she tells Christie – as Holly listens outside the door. Holly walks in and Analyse confronts her while everyone else listens outside the door. Next, Jess comes in and tells them everyone is listening. For more privacy, Christie, Jess, and Analyse go upstairs where Christie also flat out denies there are any plans for a final six. She swears on her sister’s life that there was no agreement, which is a lie. Christie says Michie is the target followed by Holly (while Michie listens outside the door). The drama! Then Michie goes to tell the news to Holly, who promptly goes to speak with Christie and Analyse. Holly throws Jess under the bus, but Christie is done talking at this point.

8:30 p.m. — We check back in with the HOH competition and Nick has the early lead. As the game progresses, Nick begins to run out of steam. Sensing Nick is growing weaker, Michie picks up the pace and is joined by Christie and Holly in the leader’s circle. Burdened by his wardrobe, Michie strips off his costume and decides to finish this out in his underwear. Meanwhile, poor Cliff is going to need a physical therapist after this contest. The man can barely stay on his feet. Eventually, Michie pulls out the much needed win and he’s the new HOH! The house offers him a fake congratulations and act is if they’re all thrilled. In reality, everyone but Holly is mortified.

8:40 p.m. — Now that Michie is the HOH, most of the house is about to start scrambling. Whether you love or hate Michie, these power shifts make the game more fun. Two of the best aspects of this season have been the uneven levels of power and the constantly crumbling alliances. Michie’s initial instinct is to put Christie and Analyse on the block, with Christie being his top target. Cliff is feeling the heat after just striking a deal with the opposite side of the house. Will he do as Kat said he would and be the first up to the HOH room striking his latest deal with the new HOH? Holly tells Michie to put Nick up next to Christie, but Michie wants Analyse to go up because she’s not a threat. Meanwhile, Christie and Analyse get together and talk about how stupid Michie would be to put one of them on the block. Tommy joins them and the girls seem annoyed that Tommy is probably safe. Tommy doesn’t feel bad about it because he’s been the one who wanted the original six back together. Christie was the one targeting Michie all this time, not Tommy. Cliff corners Michie in the shower where he has nowhere to run. Cliff shoots it straight and says he made a deal to stay alive that included targeting Michie had he won today, so he doesn’t expect any consideration. But, really, he does want some consideration. Michie sees Cliff as nothing more than a pawn for the other side of the house to use and has no plan to target him.

8:50 p.m. — Michie says he plans to put up Christie and Analyse. Only one of them could possibly come off after the Veto. In Michie’s mind, Analyse on the block is a vote Christie can’t secure. It will force Tommy to make a choice between the two. Holly wants to salvage whatever relationship with Tommy they have left because once Michie’s reign is over, they’re likely to be the top targets again. Michie agrees and believes he can work with Tommy with Christie out of the house. For that reason, he doesn’t want to nominate Christie and Tommy together. The next day, Christie heads up to the HOH room to attempt to save herself. She wants Michie to know that she wasn’t the mastermind who wanted to bring in Cliff to a final six alliance. Michie says he respects Christie and her game moves, but now it’s time for him to cover his own ass. Basically, Christie is screwed.

8:55 p.m. — As the players hang out in the backyard, Christie lets a few hints slip that she and Tommy knew each other outside of the house. Others sort of joke about it, but nobody seems to have really caught on that it’s true. Later, Michie asks Analyse who came up with the plan to bring Cliff into their alliance. Analyse says it was basically Nick that formulated the plan so now Michie knows he needs to look out for Nick. Michie tells Analyse that she’s not his target and she assumes that means she won’t be on the block. At this point, Nick is looking like a great potential backdoor if Christie manages to pull off the Veto competition.

8:59 p.m. — It’s time for the nomination ceremony! As HOH, Michie has chosen to nominate Christie and Analyse for eviction. Michie says it’s not personal and he knows if either of them had won HOH, he’d be on the block. At this point, Christie puts on a brave face and says she’s ready to go head to head with Michie in the Veto. Analyse basically crumbles even though nobody really cares if she stays or goes. Tommy is prepared to let go of Christie because if he fights too hard for her it will show his cards. As far as Tommy is concerned, if it’s Christie’s time to go it’s Christie’s time to go. We will find out who wins the Veto and if they use it to pull either Christie or Analyse off the block on Wednesday’s episode.