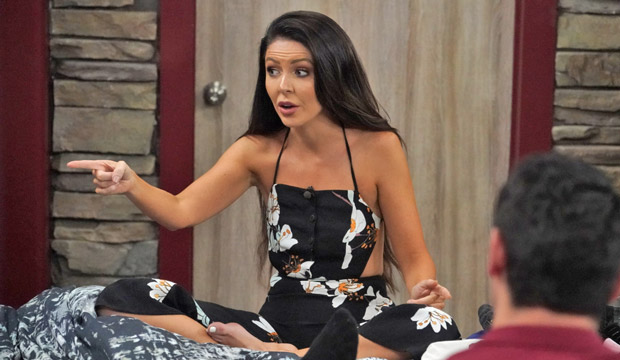 With Prank Week in full effect, new Head of Household Holly Allen had reason to be worried. While an HOH usually nominates two people for eviction on “Big Brother,” this twist dictates that she’ll only put up one nominee with America’s Prankster nominating the other. Viewers voted for who they wanted to earn the title of the Prankster, and Sunday’s episode revealed who received the most votes. Did the Prankster turn out to be an ally of Holly’s, or was it be someone that’s going to cause absolute chaos with her HOH reign?

Below, check out our minute-by-minute “Big Brother” recap of Season 21, Episode 27 to find out what happened Sunday, August 25 at 8/7c. Then be sure to sound off in the comments section about your favorite houseguests on CBS’s reality TV show, who annoys you the most and who you think will ultimately join the “Big Brother” winners list. Keep refreshing/reloading this live blog for the most recent updates.

SEE‘Big Brother’ spoilers: Who is Holly Allen planning to nominate before America’s Prankster has their say?

8:00 p.m. — “Previously on ‘Big Brother’!” In Thursday’s 26th episode, Christie Murphy seemed like a goner because then-HOH Jackson Michie had made it his sole duty to send her out the door. However, a historic Taco Tuesday blowup resulted in Christie adequately shaping Nick Maccarone as a huge target, so the houseguests all rallied behind Christie on eviction night and gave Analyse Talavera a one-way ticket to the jury house. After Holly won the Head of Household competition, viewers learned that her reign would be influenced by America’s Prankster. So who is it?!

8:15 p.m. — Christie can’t believe she survived the block last week, so naturally she goes into the bedroom and bursts into tears. In order to stay in the game, Christie offered Michie and Holly a deal to be a pawn for them moving forward and to go after Nick. She insisted that Tommy Bracco and Nicole Anthony would never go after Nick. Michie loved that Christie had no choice but to turn to him in this game and she had a lot more to offer him than Analyse ever could. Later, Cliff tells Christie that the only way he can vote to keep her is if she not only protects him, but Nicole as well. Up in the HOH Room, Cliff gives the news to Michie, Holly and Nicole. At this point, it looks like these four may have a final four deal. Meanwhile, Holly is nervous about Prank Week and her main target is Nick, but she has Jessica Milagros and Christie as backup plans if Nick saves himself. She’s most worried about the possibility of Michie being evicted during her HOH reign.

8:30 p.m. — Nicole, Cliff and Jessica will suffer a punishment after having the worst performances in the latest HOH competition. On command, the three must make pies in the kitchen and then smash them in the face of whoever they are told. To kick things off, they have to go make pies and smash them in their own faces. After a series of multiple pies to their own faces, the three wake up in the middle of the night and give pies in the face to Nick, Tommy and Christie. This is a pretty funny punishment. Up in the HOH room, Christie checks in with Holly and learns that she’s going to go up as a pawn. Christie is mortified and didn’t realize she would already go up as a pawn, even though that was the deal she made. Holly is annoyed by Christie’s reaction and wonders if they made the right move keeping her, but eventually Christie says she will put her trust in them. Michie suggests it might be a good idea to backdoor Nick. Holly says she could nominate Jessica and Christie and if Nick wins the Veto, Christie will be evicted. If Nick doesn’t win the Veto, she could backdoor him.

8:35 p.m. — After a montage of Michie’s love of watermelons, all the houseguests are called to the downstairs bathroom in the middle of the nominate. Then they are ordered to go to the living room and learn that America’s Prankster will control one of the two nominations. If the Prankster’s nominee comes off the block at the Veto meeting, the Prankster will also secretly choose the replacement nominee. All of the houseguests are nervous, but especially Christie. She knows she isn’t America’s sweetheart and that brings her to tears.

8:45 p.m. — Now that Holly is only nominating one person, she wants to calm Christie’s nerves by telling her that Nick will be her nominee. But Christie is concerned about the Prankster and who they might nominate. Holly thinks if Nick is the Prankster he will put Michie on the block. Hoping to strike a deal, Nick says he’s willing to use the Veto on Michie (if he’s nominated) if Holly doesn’t put Nick on the block. Nick reminds Holly that Christie was the one gunning for them, not him. Holly has a feeling America’s Prankster will put Michie on the block just to mess with her HOH so she considers the deal.

8:55 p.m. — We get a close look at Christie’s aggressive method of chewing food. It really is a sight to behold. Next, we learn that Nick has been voted as America’s Prankster. Nick is pumped that he will get to choose one of the nominees. He knows he could still go on the block, but at least he can choose who he’s up against. Nick plans to keep his power a secret and has decided it will be better for him to nominate Christie over Michie. After matter-of-factly telling Nicole he’ll be on the block next to Christie, Nicole’s light bulb goes off and she’s certain Nick is America’s Prankster. Holly and Michie are pretty sure Nick is the Prankster as well and Holly is wavering back and forth on whether or not she should nominate him. If Nick isn’t evicted, she wants Christie gone.

8:59 p.m. — It’s time for the nomination ceremony! Holly has nominated Nick and America’s Prankster (aka Nick) has nominated Christie for eviction. Holly is relieved that Christie is the other nominee because if Nick manages to save himself, she’s fine with Christie going home. Michie is nervous about who the Prankster is and who they would put up as a replacement nominee if Christie comes down. Meanwhile, Christie bursts into tears in the Diary Room and believes America wants her to go home. Find out who wins the Veto and if they use it to pull either Nick or Christie off the block on Wednesday’s episode.