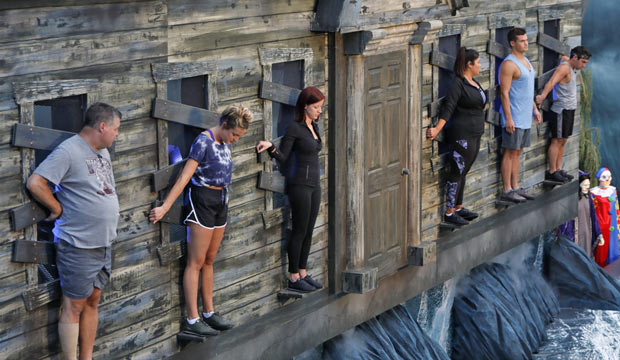 Following the unanimous eviction of Nick Maccarone last week on “Big Brother,” only seven houseguests remained in the running to win the $500,000 grand prize. Six of them competed in the ghost-themed “Hold on Fright” endurance competition to determine the next Head of Household, while the seventh, Holly Allen, was ineligible as she was the outgoing HOH. Of this sextet of scared players, who ended up prevailing on Sunday night: Cliff Hogg, Christie Murphy, Nicole Anthony, Jessica Milagros, Jackson Michie or Tommy Bracco? And which two houseguests did they end up nominating for eviction?

SEENick Maccarone (‘Big Brother’ 21) exit interview: Tommy is ‘not loyal to me’ and ‘Michie or Holly is going to win!’

Below, check out our minute-by-minute “Big Brother” recap of Season 21, Episode 30 to find out what happened Sunday, September 1 at 8/7c. Then be sure to sound off in the comments section about your favorite houseguests on CBS’s reality TV show, who annoys you the most and who you think will ultimately join the “Big Brother” winners list. Keep refreshing/reloading this live blog for the most recent updates.

8:00 p.m. — “Previously on ‘Big Brother’!” In Thursday’s 29th episode, the house was divided over whether Nick or Christie should be sent to jury. Eventually it all came down to Tommy, who broke Nick’s heart when he told him he’d already promised his vote to Christie. Nicole tried to figure out the significance of Tommy’s decision, but never quite came to the truth, that Tommy and Christie knew each other before the game began. After Nick left the game the remaining players competed in a spooky endurance comp to determine who’d be named the next HOH. Let’s go!

8:10 p.m. — The houseguests are still hanging onto this wall for dear life as water pours down on them and ghosts fly by and throw them a few punches to the gut. There is definitely a power dynamic in this house although nobody really seems to be addressing it. There has to be a line drawn in the sand this week. Surprisingly, Christie feels like she doesn’t need to win this HOH and is hoping Tommy pulls out the win. Meanwhile, Jessica confesses that Tommy would be her main target if she assumes power. As the competition becomes more grueling, Jessica falls first and let me tell you, it wasn’t graceful. She simply threw her hands up and fell flat on her face. Cliff was the next to hit the floor mat followed by Christie. Michie, Nicole and Tommy all look pretty solid.

8:20 p.m. — Michie wants Nicole to win this HOH, but as long as Tommy is still holding on Michie refuses to drop. Eventually Nicole just can’t hold on anymore and she hits the floor and starts crying. The other failed competitors huddle around to console her but Nicole is devastated. Over on the sidelines, Holly and Cliff are discussing if they’d feel safe with Tommy winning. I’m not sure who they think is left in this game, but numbers are dwindling! This is no time to hand over a HOH competition. As Michie and Tommy continue to battle it out, Michie whispers to Tommy that he’s safe. Tommy is willing to take a deal even though it doesn’t include Christie. At this point I’m certain Tommy desperately wants someone else to evict Christie so he doesn’t have to go to the end with her. Tommy drops and Michie is the new HOH. Michie and Holly are simply owning this game right now.

8:30 p.m. — Michie isn’t exactly thrilled about winning another competition. He’s obviously the biggest threat in the game at this point, but he couldn’t risk Tommy winning. He just doesn’t know where Tommy’s head is at. After saying she felt totally safe this week, Christie’s paranoia sets back in. Meanwhile, Michie tells Nicole she’s safe this week, but Nicole can’t stop crying. Michie is adamant that there is still a final four deal between him, Holly, Cliff and Nicole. Nicole is just frustrated with herself because she hasn’t contributed anything to this game and will have no resume if she reaches the finale. At this point, Michie has told everyone but Christie and Jessica that they’re safe so his nominations sort of created themselves. Cliff would prefer Christie was on the block next to Tommy, but it’s not his choice. Meanwhile, Jessica feels totally safe with Michie as the HOH, but even she’s admitted she has no idea what’s going on in this game. Later, Michie tells Christie he has to use her as a pawn and of course Christie loses it. Michie tells Christie that he wants Jess out of the game. Christie says she’s fine with it and then goes to the Diary Room and cries.

8:45 p.m. — Nicole is really getting down in the dumps over her recent HOH loss. She misses her family and just wanted to see pictures. Of course Christie saw Nicole’s tears and had to take her own sobbing to a whole other level. What a mess! Over in the pantry, Michie and Holly are holding onto their sanity and plotting how to manage their relationships in the house. They’re trying not to piss off Christie and Tommy while keeping the faith of Nicole and Cliff. If Michie can manage to get Jess evicted this week, he feels like him and Holly will be sitting pretty. Holly, however, still thinks it might be smarter to get rid of Christie this week. Cliff offers himself up as a possible pawn for a replacement nominee should the Veto be used this week. This would hide their final four deal if Michie had the option to throw Cliff on the block. Downstairs, Christie is frustrated that Tommy didn’t win this HOH and now she’s going on the block. She’s venting her frustration about being used as a pawn to Tommy when he lets it slip that Michie told Tommy he’s safe this week. Christie is furious that Tommy made a deal with Michie that left her on the block. Christie knows that Michie and Holly are working with Cliff and Nicole and Tommy agrees. Christie is not looking forward to kissing everyone’s ass for another week.

8:59 p.m. — Cliff is out in the backyard pretending he’s dancing with his wife. He misses his family and tries to communicate with them through the cameras. Up in the HOH Room, Michie tells Jess that she’s too big of a threat to compete with in mental competitions. He’s basically hand feeding her the fact that he has to nominate her this week, but it’s not registering. Finally Michie flat out tells Jess that she’s going on the block and she’s floored. Next, Christie goes to ask Holly and Michie what will happen if Jess wins the veto? Michie says Cliff would be the replacement nominee, but Christie can read right through Michie. She knows if she’s on the block with Cliff, she’s heading to the jury house. At last, it’s time for the nomination ceremony! As expected, Michie nominates Christie and Jessica for eviction. In the Diary Room, Christie says her deal with Holly and Michie is now null and void and if she can manage to get through this week she’s putting them on the block next to each other. That’s a wrap!