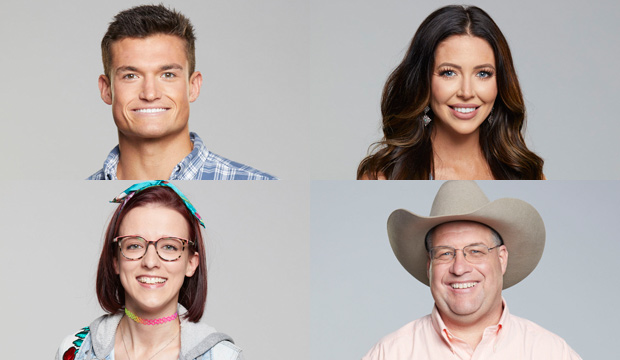 Heading into Thursday night’s eviction episode of “Big Brother,” two of the final three houseguests had already been revealed: Head of Household Nicole Anthony and Veto champion Jackson Michie, whose power granted him the sole vote to evict. As for the other two players, Holly Allen was Michie’s showmance partner who he promised to bring to the final three, and Cliff Hogg also felt safe because of the deal he made with Michie earlier in the week. So whose dreams ended up being shattered on live television: Holly or Cliff?

Below, check out our minute-by-minute “Big Brother” recap of Season 21, Episode 38 to find out what happened Thursday, September 19 at 9/8c. Then be sure to sound off in the comments section about your favorite houseguests on CBS’s reality TV show, who annoys you the most and who you think will ultimately join the “Big Brother” winners list. Keep refreshing/reloading this live blog for the most recent updates.

9:00 p.m. — “Previously on ‘Big Brother’!” In Wednesday’s 37th episode, Michie and Holly reacted to being put on the block by HOH Nicole, but everyone knew the real power this week came in the form of the Veto. Prior to the competition, Cliff and Nicole told Holly that even though they made her promise to throw the Veto, they’d let her compete under the condition that if she won she’d take Cliff to the finale over Michie. Um … okay. In the end Michie prevailed and told Holly she was safe, even as Cliff remained confident Michie was taking him to the final three. Let’s go!

9:15 p.m. — Nicole is holding out hope that Michie keeps his word to keep Cliff in the house, but he finally breaks the news to her that Cliff is toast. Nicole is furious that Michie is breaking his word, even though she wanted to break hers the week before. Welcome to “Big Brother!” Michie says his loyalty was never wavering until Cliff and Nicole considered keeping Tommy over Holly. Nicole thinks he’s full of crap and she’s frustrated with herself for trusting Cliff’s gut instead of her own. She should have kept Tommy last week! Next, Nicole goes to tell Cliff that he’s probably going home. Cliff is disappointed, but holds it together in front of Nicole. He says he didn’t come into the game to take fourth place and he’s going to speak to Michie.

9:25 p.m. — Now it’s time to catch up with the jury: Jack Matthews, Kathryn Dunn, Analyse Talavera, Nick Maccarone, Jessica Milagros, Christie Murphy and Tommy Bracco. We pick things up with Nick entering the jury and he lets the others know he feels most betrayed by Tommy. Next, Jessica walks in and the jury is floored at how dominant Michie is in the competitions, but can’t understand why they wouldn’t evict Cliff! Shortly after Jessica’s arrival, Christie shows up and Nick gives her a total stink eye. He has no respect for her game. Christie shows the others how Nicole’s HOH sent her home and jury members admit they could gain more respect for Nicole if she wins more competitions. Christie still can’t understand why Nicole didn’t take a shot at Michie when she had the chance. In other news…Nick and Kat are totally hooking up even though Nick was just professing his love for Isabella Wang a few weeks ago! Yikes! Sorry Bella, Nick’s a player.

9:35 p.m. — Finally Tommy arrives at the jury house and he flies straight into the arms of Jack. Of course Christie starts sobbing. Tommy thinks his biggest mistake in the game was confiding in Michie and Holly that he and Christie knew each other outside the house. Now they tell the members of the jury. The jury is totally shocked and Nick feels even more betrayed by Tommy than before. I wonder if Bella feels betrayed by Nick? Anyways, the jury sees Michie win another competition and finally sees how much influence Nicole has had in the game all season. Tommy tells the jury about Michie’s lie that got Tommy evicted. Analyse is impressed with Michie’s game even though it’s dirty. Jack gives props to Holly for maintaining solid relationships with everyone while playing a good game herself. Nick says it’s too close to call right now, but he’ll vote for the best player. This finale could be a nail-biter!

9:45 p.m. — Now that Cliff sees his game coming to an end, he decides to shoot for the stars. Cliff confronts Michie about breaking his word and says that he is the reason Tommy was evicted last week. Cliff then threatens Michie by telling him that if he’s on the jury, Nicole or Holly will get his vote. Michie will have a better chance at winning if Holly is in the jury championing his cause, because Cliff and Nicole will vote for Holly and swing the jury. Michie heads to the Diary Room where he basically explodes in a fury of rage. He’s fuming that Cliff and Nicole would sway the jury to give Holly $500,000 after Michie has won 10 competitions. Apparently Michie missed the TWO seasons that Paul Abrahamian lost half a million dollars for poor jury management. Welcome to “Big Brother!” Cliff is getting brutal, but I respect him for going down swinging.

8:59 p.m. — It’s time for the live Veto meeting and eviction! Michie says he’s adapted into an environment he didn’t want to. He hates what has become of the Final 4, but he pulls himself off the block and sits Cliff next to Holly. Next, Holly pleads to stay in the house after reminding Cliff and Nicole that she stuck to her word and threw the last HOH. She keeps rambling until finally Julie Chen Moonves cuts her off. Cliff says he disagrees with Michie’s justification, but he still respects him as a player and a man. Then Cliff says he’s proud of how he played the game and he will walk out with his head held high. Finally, Michie says he has to do what’s best for his game and sends Cliff packing. As Cliff walks out the door, Michie pleads with him to vote on the “game” and not personal. I love seeing Michie scramble. The dark side of me would love to see this game slip away from Michie even though he’s played it better than anyone this season. Honestly, I could deal with Michie, Holly or Nicole winning at this point. None are totally undeserving. Less than one week until the live finale!

Who will be evicted live on air? Cliff Hogg

Will Julie say ‘But first’ live on air? Yes