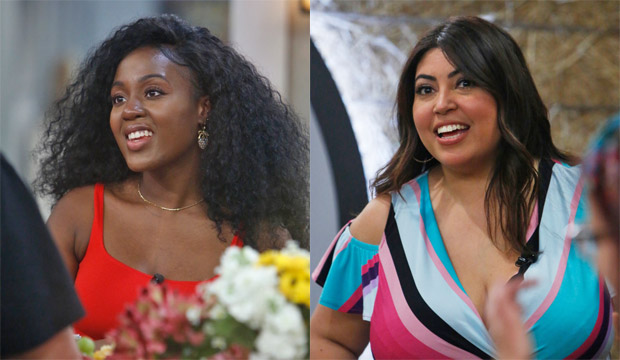 It was another great week for the powerful Gr8ful alliance, as Jack Matthews won both the Head of Household and the Chaos Whacktivity. His two nominees, Kemi Fakunle and Jessica Milagros, ended up staying on the block after Veto winner Sam Smith decided not to use the power, which meant one of these former Black Widows was about to be evicted and sent to Camp Comeback with Ovi Kabir and David Alexander. So who did the house decide to vote out this week?

SEESam Smith explains why he didn’t use the ‘Big Brother’ Veto: ‘I don’t want to create ripples’

Below, check out our minute-by-minute “Big Brother” recap of Season 21, Episode 8 to find out what happened Thursday, July 11 at 9/8c. Then be sure to sound off in the comments section about your favorite houseguests on CBS’s reality TV show, who annoys you the most and who you think will ultimately join the “Big Brother” winners list. Keep refreshing/reloading this live blog for the most recent updates.

SEE‘Big Brother 21’ spoiler: The Save Kemi campaign goes into overdrive as a new target emerges

9:00 p.m. — “Previously on ‘Big Brother’!” In Wednesday’s seventh episode, both Kemi and Jessica tried to get Sam to use the Veto on them, to no avail. After learning about the death of his grandfather, Sam decided not to use the Veto because he didn’t see how it would be good for his game. Elsewhere in the episode, the houseguests dealt with an earthquake, David correctly figured out the identities of the Gr8ful alliance, and Season 20 runner-up Tyler Crispen returned to host the Veto competition. Who’s ready for the second eviction episode of “BB21”? Let’s go!

9:10 p.m. — Jack is thrilled that Sam chose not to use the Veto because Kemi has been his target for quite some time. Although he wants Kemi evicted, he hopes to smooth things over with her since she’ll still be living in the house. Cliff Hogg III is hedging his bets that Ovi will return to the game and forms an alliance with him and Nicole Anthony. They call themselves the Fellowship of the Zing. Meanwhile, Nick Maccarone and Isabella Wang are forming quite the showmance. Nick is determined to keep Isabella safe, but for now they’re just smooching all over the house. Another “Big Brother” hookup is Jack and Analyse Talavera. It appears as though those two were doing a little more than smooching up in the HOH room.

9:15 p.m. — Cliff wakes up before everyone else, pours himself some coffee and decides to head into the Boat Room and talk to the cameras. At least he’s entertaining himself. Christie Murphy overhears him talking about how close her and Tommy Bracco are as well as him spilling the beans about his Zing alliance. Christie can’t believe what she’s learned from Cliff’s monologue. She immediately runs to tell Gr8ful everything she’s heard. Damn Cliff! He just blew up his whole game talking to himself.

9:25 p.m. — Nicole pulls Kemi aside and tells her Isabella is not to be trusted. Kemi is frustrated to learn that Isabella is playing both sides and plans to expose the fact that Isabella was the player who formed the Black Widow alliance. She runs straight to Michie to expose Isabella’s game and also let him know that Isabella told her she has a final three with Jack and Michie. Michie is surprised by this news and lets Kemi know she still has a chance to remain in the game. The next morning, Michie heads outside with Jack and tells him everything Kemi said. Jack is shocked. He also reveals that Cliff, who they thought they had in their back pocket, is gunning for them. Meanwhile, over in the Boat Room, Isabella spills the beans to Sam about the Gr8ful alliance. This girl can’t keep her mouth shut! She tells Sam that he’s basically their unofficial ninth member. Sam feels blindsided and I can’t believe that David is the only person who figured this out days. Now Sam doesn’t want to send Kemi home because she’s actually on his side.

9:30 p.m. — With a new determination to keep Kemi in the game, Sam heads straight to Jack to plead his case. Sam says Kemi may be going after Jack, but Jessica is going after all the guys. Then, like an IDIOT, Jack says he’s made it very clear that he’s doing whatever is best for Gr8tful. The problem is, Sam isn’t part of Gr8tful! Oh man, this house is a mess. Awkward! Sam may give the most obnoxious Diary Room confessions, but I’m loving his game play right now. Sam is ready to turn this game upside down.

9:40 p.m. — It is time for the live vote and eviction. Either Jessica or Kemi will be sent upstairs to Camp Comeback. Jessica gives a forgettable, boring speech and then Kemi steps up and drops the hammer. She calls out Nick and Isabella for playing both sides of the house and tells them she’ll see one of them in Camp Comeback next week. Now, it’s time to vote! By a vote of 10-1, Kemi has been removed from the game. Her sole vote came from Michie, who appears to just want to stir the pot. Will he try to pin that vote on someone else?

9:59 p.m. — It’s time for the live HOH competition! With secrets exposed and alliances crumbling, this HOH is a must win for everyone. As the outgoing HOH, Jack is not eligible to compete. David, Ovi and Kemi will watch from Camp Comeback. One at a time, players will throw an arrow at a target. They each get one shot. The houseguest with the highest score will be the new HOH. Sounds simple enough! But there is one twist: If a player, for whatever reason, doesn’t want to be HOH, they can aim for two smaller targets at the top of the board. One of those targets is $5,000 and the other is safety for the week. With a score of 90, Nick is the new HOH! Gr8ful stays in power and despite Isabella’s awful game play this week, she did one thing right by sparking a showmance with Nick. That’s a wrap for this week!