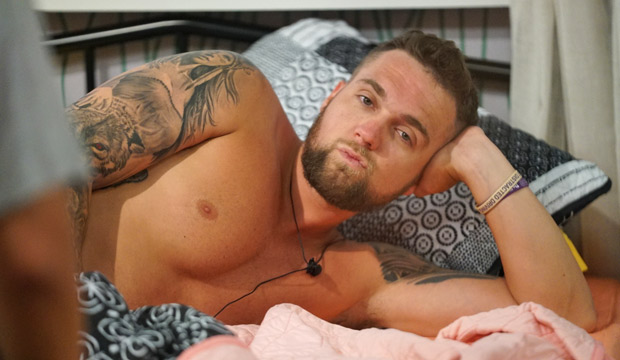 For the third week in a row, the Gr8ful alliance held all of the shots in the “Big Brother” house. Following the successful reigns of Christie Murphy and Jack Matthews, this week’s Head of Household was none other than Nick Maccarone, who just got called out last week by evictee Kemi Fakunle for playing both sides of the house along with his showmance partner Isabella Wang. With Gr8ful sitting pretty yet again, that meant it was likely that Nick would nominate two of the outcasts: Cliff Hogg, Jessica Milagros, Kathryn Dunn, Nicole Anthony and Sam Smith. So who did he put on the block, and how did the Panic Whacktivity play out?

Below, check out our minute-by-minute “Big Brother” recap of Season 21, Episode 9 to find out what happened Sunday, July 14 at 8/7c. Then be sure to sound off in the comments section about your favorite houseguests on CBS’s reality TV show, who annoys you the most and who you think will ultimately join the “Big Brother” winners list. Keep refreshing/reloading this live blog for the most recent updates.

SEE‘Big Brother 21’ spoiler: Nicole realizes she’s screwed, but Jackson isn’t as slick as he thinks with his hinky vote

8:00 p.m. — “Previously on ‘Big Brother’!” In Thursday’s eighth episode, Kemi was evicted by a 10-1 vote over Jessica, with Jackson Michie being the sole vote to evict Jessica. (Hmm, what gives, Michie?) Thanks to the Camp Comeback twist, Kemi is still allowed to play the “social game” while living in the “BB21” house alongside fellow evictees Ovi Kabir and David Alexander. At the end of the live episode Nick claimed his first HOH victory and celebrated with the other members of Gr8ful. Time for another nominations episode, so let’s go!

8:10 p.m. — Nick is thrilled to be the new HOH, but him and Isabella are both furious with Kemi for calling them out at the eviction ceremony. In the bedroom, Cliff and Nicole are questioning who cast the sole vote to evict Jessica. Nicole thinks the rogue vote will be pinned on her. Sure enough, Michie went straight to Nick and blamed his vote on Nicole. At this point, Nick is considering Cliff, Jessica and Nicole for nomination. Meanwhile, Isabella is still venting about Kemi’s eviction speech and says their friendship is over. Next, Isabella asks Kemi if she’s stupid and they get into a heated argument before Sam separates them. Drama!

8:20 p.m. — Michie confesses to Jack that he voted for Jessica to blame it on Nicole. Jack calls him a “sick bitch” and then gives him a fist pump. He’s impressed with his bro’s game play and they give each other a slap on the ass as they walk back to join the other houseguests. Up in the HOH room, Nick tells his alliance he doesn’t think Nicole voted for Jessica. Michie is doing everything to convince the others Nicole went rogue and it’s making Nick suspicious. Nick and Isabella are losing trust in Michie and it looks like they’re forming a tighter relationship with Sam. Is Gr8ful about to fall apart?

8:35 p.m. — Nick pulls Nicole aside and asks if she’s worried that he’s HOH. She says she thinks she’s going down with a sinking ship and Nick tells her not to worry. He won’t nominate her. Next, it’s time for the final Whacktivity competition! Participating this week are Analyse Talavera, Nick, Jessica and Christie.  To win this Whacktivity, players must dig into a heaping pile of nasty cockroaches and move them around to display symbols they must decipher into a phrase. The person to finish fastest will win this week’s special power. Analyse is pretty bad at this and can’t even figure out how to spell the name Julie. Jessica is terrified of the cockroaches and this looks like an epic fail for her as well. Nick seems fine with cockroaches, but he is terrible at deciphering what these symbols mean. Christie goes into complete beast mode and is named the winner of this Panic Power!

8:45 p.m. — Christie heads to the Diary Room to find out what her new power is. She has the the ability to turn a Power of Veto into a Diamond Veto. This will allow the Veto holder to not only remove someone from the chopping block, but they will be able to name the replacement nominee instead of the HOH. She has to use this power within the next four Veto meetings. Christie pulls Tommy Bracco aside and tells him about her win. She doesn’t want anyone else to know, so when Jack walks in the conversation shifts. Jack confesses to Christie and Tommy that he holds one of the powers, but Christie refuses to divulge her news to him. Meanwhile, Kemi is determined to stay in this game socially and she wants to set Nicole up for success. She tells Nicole that Christie overheard Cliff saying he’s in alliance with Ovi and Nicole. This sends Nicole into a panic and she has to tell Cliff. Cliff feels awful but is thankful for the heads up. Next, Cliff goes to Nick and offers himself up as a pawn. He says he wants to work with Nick and Bella, but Nick wants Cliff to go home.

8:55 p.m. — After a segment full of all Kathryn Dunn‘s hilarious commentary, Kemi is called to the Diary Room to get fitted for her Camp Comeback uniform. Next, Nick, Bella and Sam are chatting in the HOH Room. Nick thinks the Gr8ful alliance will fall apart within a week. They think they’re at the bottom of this majority and Sam suggests making a big move this week. For starters, the blood wouldn’t be on Sam’s hands and he’d love to see Nick take the first shot. Nick thinks it may be a bit early to gun for Jack or Michie.

8:59 p.m. — Michie confesses to Nicole that Nick and Bella scare him and he’d like to target them. Rather than working with Michie, Nicole takes this news to Nick and Bella instead. Nick and Bella are upset and feel betrayed. Is now the time to draw the line in the sand? At the Nomination Ceremony, Nick refuses to ruffle any feathers and nominates Cliff and Jessica. Yawn! In the Diary Room, Nick says he’s still willing to backdoor Jack or Michie if he can confirm what Nicole told him is true. That’s a wrap for tonight!