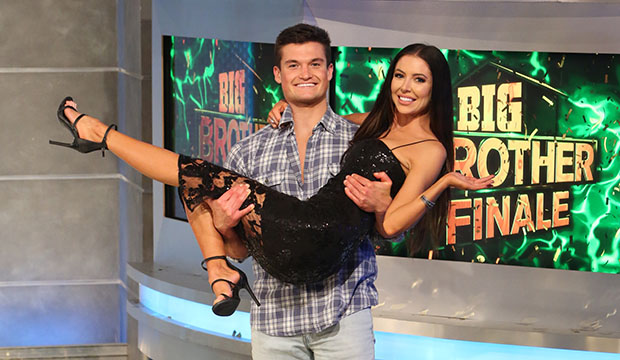 Holly Allen made it 83 days before getting nominated on “Big Brother 21” — and that was because she was the only option left. But the last two weeks were kind of torturous for her, between nearly getting evicted at final five if it weren’t for Jackson Michie‘s lie about Tommy Bracco to save her, throwing the final four HOH to honor her deal with Cliff Hogg III and Nicole Anthony, and actually considering — really! — taking Nicole to final two over her season-long showmance.

In the end, she didn’t have to make that decision, as Jackson won Part 3 of the final HOH and took her, culminating in a 6-3 win for him. The wine safari guide is OK with the loss, but she’s still conflicted about some other things. Find out in our exit interview below. (Check out our interviews with Jackson here and Nicole here.)

Gold Derby: How does it feel to be runner-up?
Holly: Probably not as good as it feels to be the winner. [Laughs] But I have no complaints. I’m feeling pretty OK.

Gold Derby: Did anybody’s vote surprise you?
Holly: I thought I would have Sis [Talavera]’s vote. That bummed me out. I’m not sure where her bitterness was from. And then Christie [Murphy] and Tommy, I knew they’d be wild cards. I thought their votes could go either way. Even though I’m much closer with them on a personal level, I know they voted for the game they saw in their face. They didn’t surprise me, but I was holding on to hope for them.

Gold Derby: I feel like they and Cliff could’ve swung either way depending on how bitter they were.
Holly: Yup. I thought Cliff could possibly swing too. It’s just that Jackson had such an in-your-face game and I think flew a little bit too below the radar.

Gold Derby: The crux of your argument was that you were the behind-the-scenes puppet master keeping Jackson off the ledge. Why do you think that was harder for the jury to wrap their heads around? Is it just because it’s not as overt as Jackson’s aggressive gameplay and comp wins?
Holly: Right. Yeah, definitely. The jury [members] have been in jury for so long and all they’ve seen is Jackson winning comps and winning comps. I did so much, but they didn’t see it. And in a one-minute speech, can I really fill them in on all the game moves I’ve made over 99 days and all the strategic things I’ve done? It wasn’t enough time and I think their minds were already made up.

Gold Derby: It’s kind of like Tyler [Crispen] last year. He did a lot, but he didn’t have enough time to explain himself.
Holly: Yeah, and we’re both runner-ups!

Gold Derby: You said to Nicole a few times this week that you knew it would be better if you cut Jackson if you won the final HOH. How seriously did you ever consider that?
Holly: I certainly considered taking Nicole if I had won. [It’s a] better game move. I thought I had a better chance of winning against her. And also, I adore Nicole and I respect her a lot as a person. In any other situation, I would’ve loved to be standing next to her in the final two, so I seriously considered her. But ultimately, I just knew there was no way, in good conscience, I could turn my back against the one person that had had mine for the entirety of the season. Even though I knew that I would likely lose to Jackson, I knew I would still have to pick him.

Gold Derby: How much of your decision to stick with him was influenced by what had happened with Tommy?
Holly: I don’t think it really affected my decision on whether I would take Jackson or not because he had been by my side for so long leading up to that. And I know the lie was formulated to try to save me, but at the same time, I didn’t fully stand behind it because It was not the game that I was playing. I really wanted to play a clean game, so I had such mixed emotions about that entire situation. And I still do. I’m still torn about that whole thing.

Gold Derby: Tommy directly addressed you, asking you how you could you silently sit on the while he’s badgering him.
Holly: Yeah. I was just guilt-stricken. But I knew that it was my life in the game or Tommy’s, and as much as I’d love Tommy and I making it to the end and as much as I love him, I knew it was only one of us. I knew that any doubt that Cliff and Nicole had about Tommy would be beneficial for my game. I couldn’t speak up and say, “Jackson’s lying,” you know? Oh, man, talk about a moral conflict. That was rough.

Gold Derby: It worked and you go into the final four HOH. Did you think about not throwing it because they already saved you and you could argue what Jackson eventually argued — you don’t owe Cliff and Nicole anything because they were going to betray you?
Holly: Yeah, and that’s why after throwing it, I was so burned out by how they were acting that I was like, “You know what? I’m not going to throw the Veto. I’m not going to adhere to their new terms of the Veto and take Cliff over Jackson.” I was so burned out by the new deals and the addendum to the deals and everything. But in the moment of the actual HOH, when I threw it, I didn’t want to, but I had just looked them in the eye and I had just shaken their hands, and I knew that I couldn’t — ugh! My dang country upbringing and the way my parents raised me, I knew that I couldn’t go back on my word.

Gold Derby: And Jackson kept telling you to drop.
Holly: Well, I wanted to hang on for longer at least because it was such a fun comp. I just wanted to hang on longer and he was like, “You better drop.” Because I didn’t realize that Nicole was struggling. So Michie was like, “Holly, hurry up.” But I was having fun!

Gold Derby: It was pretty ballsy of Cliff to give you “permission” to compete in the Veto. Do you think he was getting greedy at that point because he had been making all these deals and people agreed to them?
Holly: I think Cliff was burned out. I think he got a little sloppy with his strategy. And honestly, that is when I knew I did not need to keep my word anymore — when he was giving me “permission” to compete. That sort of domineering attitude — and I love Cliff; I’m not saying anything bad about his character — but it was just sloppy gameplay and I was so disappointed. That was when I was like, “OK, nope. I will tell you what you want to hear, but no shot I’m going to hold up my end of the bargain because this is so unfair.”

Gold Derby: Are you as shocked as everyone else is that Cliff thought Jackson would take him over you, his girlfriend, to the final three?
Holly: Yeah! I was like, “Cliff, c’mon, you’re smarter than this.” But it worked out in our favor that he believed him.

Gold Derby: After Tommy told you that he and Christie knew each other, did you think he and Christie were hypocrites because they were accusing you and Kat [Dunn] of knowing each other — which you do — but they were being sanctimonious about it and using it as a reason to flip the vote?
Holly: Oh, yeah! They’re hypocrites. But also, Kat and I also didn’t know each other very well before the game, so it was not a leg up because I didn’t really know if I could trust her. And then Kat with her big mouth! It was kind of a hindrance as much as anything — and I love Kat. I’m so happy she was there and that experience brought us together, but we hardly knew each other. And here’s Christie and Tommy, who are basically family, and they almost ruined my game and Kat’s game just based on thinking that we knew each other. And yeah, I need to have some words with them because that hypocrisy has not sat very well with me! [Laughs] That was not cool.

Gold Derby: In Part 3, you missed one question and you said you done goofed. Did you misread choice C?
Holly: Yeah, because it was a double negative. I knew that Sis did not get zinged by Zingbot and I read it in my mind as “I did get zinged,” so I thought, “OK, false, she didn’t get zinged.” But then I wasn’t thinking about the other [options]. I knew she competed in the [third] Veto of the season and I forgot about the first, Food Fight. So I totally goofed.

Gold Derby: Nicole would’ve taken you over Jackson to final two. Did you consider not winning Part 2 because you’d have two people who’d definitely take you and you wouldn’t have to worry about cutting him?
Holly: Yup! Yup! Yup! I exhausted my mind. It really was a thought in my head that I should just not win and then either of them would take me. But at the same time, if she had won 2 and 3 and taken me, then to the jury, it would really look like an underdog glory story with her — winning and coming into the spotlight, overpowering me. Especially with the comp that I threw her, if she had won the final HOH, she would’ve had more wins than me. I was worried that that would’ve come back to bite me and maybe she would end up winning, so it was just a gamble either way. But I wanted to at least have control. I wanted to give it my all, especially after not competing as much as I wanted to [in the final four HOH]. I wanted to give it my all and hopefully it would be in my hands, and I could’ve won Part 3 and made my decision even though I would’ve had the same outcome.

Gold Derby: If it were between you and a watermelon for final two, he’s taking the watermelon.
Holly: Oh, 100 percent! I would stand no chance.