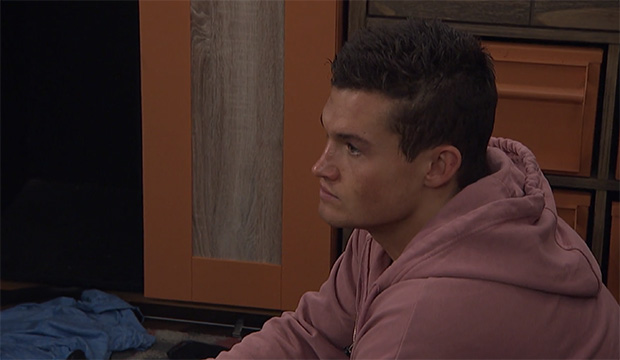 Well, he did it. Cliff Hogg III finally dropped his “nuclear weapon” in his last-stand pitch to Jackson Michie on “Big Brother 21” on Wednesday. And well, Jackson was not pleased. It ultimately didn’t change Jackson’s mind, but it did have him wondering a few things.

After spending all day talking about it, Cliff finally got around to campaigning to Jackson circa 6:20 p.m. PT. They rehashed their usual crap about the deals and whatnot. The only thing noteworthy here was when Cliff asked Jackson if Holly Allen‘s his No. 1 and he said yes, and Cliff couldn’t understand why Jackson talked about final three with Cliff and Nicole Anthony so much. Bro, if you can’t figure that out — let alone that his showmance will be his priority — I can’t help you.

Finally, around 7:00 p.m. PT, Cliff played his final card: threatening jury votes. He told Jackson that he’d vote for Nicole if it’s her and Jackson in final two, and he and Nicole would vote for Holly if it’s Holly and Jackson in final two because she honored her deal with him and Nicole unlike Jackson. He said if he he goes to jury, he’ll infect the jury house and turn them against Jackson for breaking his word. But if Holly goes, she can advocate for him to win.

“If you and Holly are up there, and a word has been broken, you basically need to get five votes from the seven people in the jury house right now,” Cliff said. “If Holly is over in that jury house and has the next few days to sell some people … you would have Holly’s on the other side plus whoever is over there. If it goes down this way, Nicole and myself, Nick [Maccarone] as well… well, you can add up some names. I feel it would be tough for your game. I think it would be a lot easier if Holly was over there as opposed to me being there and talking to those guys.”

Jackson was quietly seething this whole time, and after Cliff left, he went off to the cameras. “Are you f—ng kidding me? Are you f—ing kidding me? You are going to threaten me with f—ing jury votes?” he fumed. “So by doing what’s best for my game, I am going to lose two votes and everyone else’s? OK, sick. Appreciate it, Cliff. Thanks for making my job a hell of a lot easier.”

So, yeah, Cliff’s plan had the opposite effect. Now Jackson is definitely not keeping Cliff, but he’s also pissed at hell, which is hilarious because, you know, this is the same person who concocted a lie and attacked Tommy Bracco last week. It’s all part of the game, dude.

Jackson then complained to Holly about how he got “bullied and strong-armed into a f—ing corner.” Holly tried to calm him down by saying that Cliff is probably just bluffing because he wants to stay and would actually vote for Jackson to win. But this was the best part of this whole exchange:

Jackson:  “Sounds to me, according to him, if I’m sitting next to you that you are winning half a million.

Just so we’re clear, Holly, you’re saying it’s “absolute bullsh–” and you’re pissed off at the the suggestion that you would win $500,000 over Jackson? OK, got it. Glad to know for sure where your head is at.

Jackson spent the rest of his night stewing in his rage. He’s “so f—ing mad” that he’s “going to light this house on fire with my speech tomorrow.” He later bitched to Nicole about Cliff’s pitch and confirmed to her that he’s evicting Cliff. She then had a grand ol’ time dragging Jackson.

We really need more of Savage Nicole. Hopefully she’ll come out in spades once she’s stuck with Jolly for a week.

By the end of the night, Jackson was so stressed that he considered using the Veto on Holly so she’d be the one to evict Cliff, but he knew that would be “cowardly.” He then started to worry that Tommy has already turned the jury against him.

As for Cliff, he knows he’s cooked, but can’t blame him for trying. Even though his big pitch didn’t work the way he needed it to, it did enough damage to stick in Jackson’s craw and have him fret about his jury management. The problem with both of them is that they’re both using excuses to try to justify their decisions and actions, and they keep going back to their precious deals. Just be straight at this point.