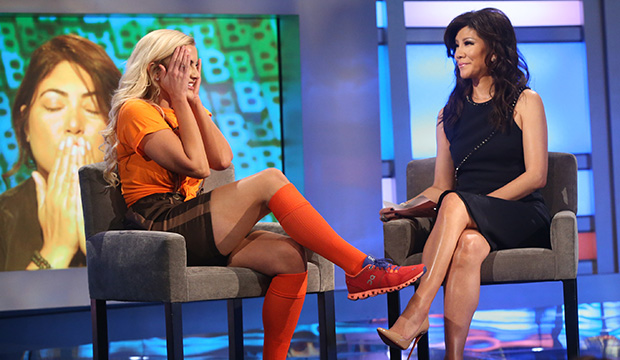 The Kat’s out of the house. Kathryn Dunn was evicted 6-1 on Thursday’s “Big Brother 21,” but she didn’t go quietly into the jury house. Kat’s last 12 hours in the game were wild, as Jessica Milagros blew up the new final six group that does not include her, and Kat confronted Cliff Hogg III about not including Jess in the group before she exposed Cliff’s Angels herself.

But Kat’s fate was sealed before that because people didn’t believe that she would target her former showmance Jackson Michie since she had become very close to him and his current showmance Holly Allen, who both wanted to keep Kat. So why didn’t she come up with a different campaign pitch? How seriously mad is she at Cliff? And what would she like to say to her crush/speech king Brett Robinson, who ought to be pleased with Kat’s final verbal scorcher? Find out in our exit interview with Kat, via email, below.

Gold Derby: You kept insisting that you would target Jackson, but no one believed you. What was your game plan had you stayed and won HOH?
Kat: I really was gonna target Jackson! No one believes me and I don’t know why they don’t believe me because being in the house there were a lot of tense moments between us that did result in us having to be in separate rooms. But the thing about “Big Brother” is everything moves so fast, so people forget about our turbulent relationship.

Gold Derby: Why didn’t you come up with a new campaign when it became clear people didn’t believe you would target Jackson?
Kat: Because I was telling the truth. I didn’t want to make anything up because it wouldn’t be consistent. And there was literally no one in the house I could target at that point if I wanted to stay safe because Tommy [Bracco] being HOH, I couldn’t tell him I was going after anyone in his group. And Holly and Jackson were the main targets at that time. So I just kind of wanted to stick with what made sense and what was true for me.

Gold Derby: What were you thinking when Jess blew up the final six deal to the whole house, which effectively blew up your game?
Kat: Did it blow up my game? I don’t even know! What am I missing? I guess I’ll just have to see what happened on the show.

Gold Derby: Why did you expose Cliff’s Angels to Nick [Maccarone] when it would hurt more than help Jess and Nicole [Anthony]?
Kat: That was just a reactive moment for me. And I guess I do regret it. But at the same time, I also felt like it was a fake alliance, just because I found out that Cliff didn’t really have Jess and Nicole’s back like I thought he did.

SEE ‘Big Brother 21’ spoilers: The Week 8 HOH might screw up some very easy nominees, so we’re manifesting that doesn’t happen

Gold Derby: You called out Cliff for looking out for himself and not including Jess. You also played both sides early on and were informed about the vote-flip to evict Cliff. How much of your confrontation with him was out of anger or do you really think he shouldn’t have done what he needed to do to survive?
Kat: Man, you’re calling me out for all my sh–! Well, for me, at that moment it wasn’t that Cliff was trying to protect himself because I actually do totally get that. It was more that he had vowed to me that he was going to move forward with Nicole and Jess and since that final 6 plan didn’t include Jess — and also I had heard him say so many negative things about everyone in that final 6, so I get you have to sell your soul to a point to survive the game, but I still was just really disappointed.

Gold Derby: As a juror, will you be conspiring against these bitches?
Kat: No! Ha. I mean, there are some people I would be disappointed to see in the final two. Even though I cried a lot this week, I don’t necessarily always consider myself to be an emotional player. I do want to make a logical decision that will reflect who the best game player is. But with that being said, there are a few people that wouldn’t have my vote no matter what.

Gold Derby: What would you like to say to Brett?
Kat: Oh, my gosh! Wow. I can’t even! First, I want to find out if he has a girlfriend, and I want to find out if he’s even interested, or if he just thinks that I’m crazy. I haven’t had any contact with the outside world. I don’t really know what he thinks of me, so I’m slightly embarrassed, but I shot my shot!