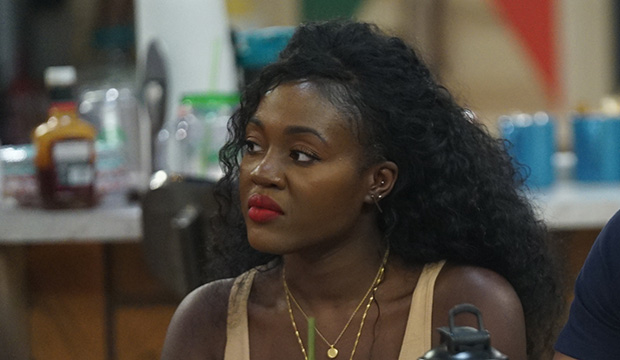 Kemi Fakunle is back home catching up on all the “Big Brother 21,” um, shenanigans she wasn’t privy to in the house, and like Frances McDormand, she’s got some things to say.

On Saturday, Kemi tweeted a statement thanking fans for their support while denouncing the nasty behavior she has since learned was occurring inside the house, saying she is “extremely disappointed and disgusted.”

“The degrading and threatening comments made by some houseguests and laughed at by others are outrageous and hard to see,” she wrote. “I am saddened to be associated with such a negative display of human character and am horrified that this is now a part of my life story.”

The Gr8ful alliance is responsible for most of these toxic comments about anyone and everyone who’s not in their group, and their true colors were finally shown on the broadcast show for the first time last week when they shunned and attacked Nicole Anthony in the HOH room.

Kemi, who was in Camp Comeback for a week before losing the comp to return on Thursday, was a favorite target of Gr8ful, namely Jack Matthews, while she was in the house. He had disliked her from the beginning — apparently because of a comment she made about his cooking — and repeatedly badmouthed her behind her back. He’s called her everything from a bitch to a maggot, and said he wanted to “stomp a mudhole” through her chest, later claiming he was just echoing Sam Bledsoe‘s threat from last season and didn’t really mean it. These comments weren’t shown on the broadcast show, but last Thursday’s episode did include Jack reprimanding Kemi like a child about leaving her shaker bottle in the fridge.

In our exit interview, which took place before Kemi caught up everything that went down, the 25-year-old said Jack was the hardest person to deal with in the house and surmised that he targeted her because she wasn’t fawning over him like some of the other women in the house.

SEE ‘Big Brother 21’s Kemi sounds off on Jack: He is a ‘raging douche lord’

Addressing the bullying accusations this season, “Big Brother” executive producer Allison Grodner told “Entertainment Weekly” that the attack on Nicole at least was a product of mob mentality. “The house dynamics in this social experiment are unpredictable and different every year as people align and realign,” she said. “The bigger the group, the bigger the chance for some sort of ‘mob mentality.’ It seems to be that ‘mob mentality’ that occurred this past week against Nicole. As a large group, they whipped each other up into a frenzy and it became a major story both in and out of the house.”

Kemi, meanwhile, is taking the high road and is asking her fans to do the same. “It’s unfortunate how the season has transpired thus far and while I appreciate the support, I do ask that the negative comments that have been made in my defense stop,” she wrote. “I do not want to perpetuate the same negativity that I received in the house.”