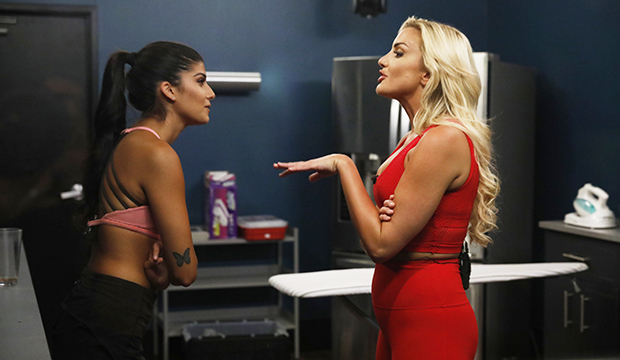 Despite some last-minute wavering over whether to backdoor Nicole Anthony on “Big Brother 21,” Holly Allen did what she had planned to do — and what literally everyone knew she’d do — and put up Kathryn Dunn as a pawn next to Sam Smith. So it’s likely “buh-bye, Sam” on Thursday, but he plans to go down swinging.

Not long after the Veto ceremony, Sam told Nick Maccarone that he plans to blow up Christie Murphy‘s game in his eviction speech. The two had had an argument the night before about whether Sam had wanted Jack Matthews out, which morphed into Jessica Milagros thinking Sam wanted to target her. It was dumb. But now Sam is determined to prove how shady Christie is before he leaves the house. He also told Nicole and Cliff Hogg III his plan and that he knows Christie has “said some stuff.”

“I want to put a target on her,” he told Nicole. “She said she was going to blame Jack and [Jackson] Michie for bullying her and for putting her under peer pressure, and that’s how she is not going to use the power.

Nicole told him to blow up Christie’s game before Thursday, but Sam doesn’t think that would work. Sadly, he is right. The No. 1 thing Christie does best is talk. The second thing she does best is manipulate. Her conversations are endless circles of her bending the narrative to suit her, and as Holly finally realized on Sunday, she exaggerates everything. So if Sam were to do this earlier, Christie would just have more time to sway people back in her corner. Nevermind the fact that the majority of the house is on her side anyway already.

Little does Sam know that Christie has been made aware of this. Nick tipped off Christie, who of course denied ever having done anything bad, and Cliff also gave a heads-up to Holly and Jackson. So depending on what Sam says, this might not be as big of a stunner as he wants it to be. But he really doesn’t have many options right now. He knows people won’t vote Kat out, so instead of him trying to campaign to people to keep him, he plans to invoke the Kat of Week 1 and make her spiral.

“I will probably be like, ‘Why didn’t they put up Nicole?'” Sam told Nicole. “Hopefully she would start thinking, “Am I that expendable to them?’ Maybe I will have a little chance. Probably not, but I will try.”

Well, Sam, you should probably know that Kat is basically you now: the ninth/seventh person in an eight/six-person alliance. Except she’s more clued in than you ever were and had agreed days ago to be a pawn. Kat has also come into her own since then that the first week seems more like an aberration than anything. She’s weird and funny, obsessed with Brett, and hates Jackson with the fire of a thousand suns.

But if anyone’s going to start an Anti-Kat campaign this week, it’ll be Analyse Talavera. After unsuccessfully and not-so-subtly trying to get Nicole on the block, Analyse is now pissed at Kat because she thinks Kat has a crush on her boy Jack. This is hilarious because 1) Imagine targeting someone over Diet Jason Momoa. 2) Analyse flirted up a storm with Nick, laying in bed with him, while Isabella Wang was still in the house and knowing full well they were in a showmance. (To be clear, she can flirt with whoever she wants, but don’t be all pot/kettle now.) Analyse was so annoyed with Kat that she wanted to go off on her until Jack told her to chill the eff out.

SEE ‘Big Brother 21’ spoiler: The Veto plan is still in flux while the Six Shooters continue to crack

Later at night, Kat vented to Jess about Analyse and how it was Analyse who started the whole Renom Nicole train. “[Analyse] came in so nice and quiet, but when is the last time that you saw her be sweet? She is always in a pissy mood. She really just is always in a bad mood,” Kat said. “I would have a reason to put Sis up. I don’t know who else I would put up. I would love to win HoH. I want Jackson to go home. I would have to backdoor him.”

I’m all for breaking up the Six Shooters for numerous reasons, first and foremost being that this season desperately needs a power shakeup. But there are bigger fish to fry among them than Analyse, someone who can’t even spell “Julie.”

As for the Six Shooters in general, it was business as usual for them as they discussed their pecking order for the next few weeks. Obviously Nick and Nicole are primary targets next week. But if Sam’s scheme works, maybe things will be a tad different. We can only hope.