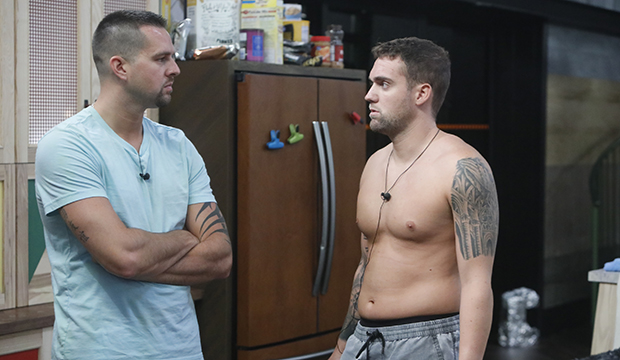 With the Six Shooters in power yet again on “Big Brother 21,” this week is about small victories. We got one on Saturday when Nick Maccarone won Veto, which means Holly Allen won’t get her target out. And now the sextet can’t agree on a new target as it continues to almost burst at the seams.

SEE ‘Big Brother 21’ spoiler: Week 5 Power of Veto ceremony results on #BB21 and what they mean for August 1 eviction

You’d think with Nick untouchable that the Six Shooters would all just boot Sam Smith, especially since Kathryn Dunn had already agreed to be the renom even before nominations. But Analyse Talavera was never fully on board with evicting Nick and is now pushing hard to keep Sam and for Holly to put up Nicole Anthony as the renom. She finds Nicole sketchy, fears she would target them, and wants her gone before the double eviction. She also wants to keep Sam so he could help target Jackson Michie and Jack Matthews when it comes down to it, since no one else besides Cliff Hogg III has the balls to.

Sam also suggested to Holly to put up Nicole because he realized she’s the only person he might have a shot at staying against. He previously was angling for Jessica Milagros, which is LOL. Look, Jess is useless, but ain’t nobody gonna evict her over you, Sam. Holly was straight with him and told him that even if Nicole does go up, Sam might still be evicted.

At first, Holly wasn’t into renoming Nicole, but she got more confused and flustered as Sunday went on. At one point, Nicole asked her where her head was at and Holly said, “I don’t know,” and it’s actually believable. Aw, her brain is hurting because this is the first time she’s had to think about the game. Adorable. Tommy Bracco, who has long wanted Sam gone, and Christie Murphy are Team Evict Sam since he’s obviously the bigger threat and is friends with their mortal enemy Nick. Christie also doesn’t understand how Nicole is a threat and vows she’s done going after people like Nicole who aren’t a danger to her game. They argued that they can get Sam out this week and Nicole next.

Jackson then played devil’s advocate, asking Holly what’s the real reason to evict Sam other than that Christie wants him gone. “If someone is pushing for something really hard in this game, it’s for a reason,” he noted.

“It’s because it fits their agenda,” Holly replied.

“Exactly,” he said. “She knows Nick and Sam would be willing and able to take a shot, and it would f— up her final two.”

Holly tried to get confirmation that Nicole was the one telling people last week that Holly and Jackson wanted to flip to save Isabella Wang, but Christie poo-pooed it as Sam being the one who started the Save Bella campaign. By the time they all hit the hay early Monday, Holly was still torn, though she at one point was leaning toward evicting Nicole, and started getting pissed at Analyse and Christie; the former because she’s the one who wants to keep Sam and Holly thinks it’s because Analyse wants him to target Holly and Jackson, and the latter because she realized Christie overdramatizes everything because she heard Christie retell a conversation Holly was part of with lots of embellishments.

“That’s not at all how the conversation went,” Holly told Analyse and Jackson. “I was there and it was factual, but she emphasized everything so much, made everything so much more dramatic, and I was like, ‘OK, this is why I have to be careful with what I tell you because you take it up so many notches.'”

Also, when is anyone going to also realize that Christie never stops talking?

SEE ‘Big Brother 21’s’ Bella: ‘I definitely acted in a way I regret’

Anyway, Holly still doesn’t know what to do. She will probably just take the easy route and renom Kat, and Sam will go this week, and she won’t ruffle any feathers. Even if she does make the minor move of putting up Nicole, Sam will probably still go unless she makes a concerted effort to save him. She could surprise us all and backdoor Christie, but she won’t. Her indecision over Kat vs. Nicole vs. Sam is just evidence that she has no boldness and backbone in her own game to take a risk, just like all of these people not named Cliff. Sure, Cliff fell in line eventually, but that was because he was spooked by Christie’s power; he still took the initial shot. Everyone else here is trying to buy time and wait for someone else to make a move against the Six Shooters, even the Six Shooters themselves.

But the good news is, all this deliberating has the Six Shooters casting side eyes at one other. They are all ready for the alliance to break and to turn on one another. It won’t happen this week, but it’s coming.