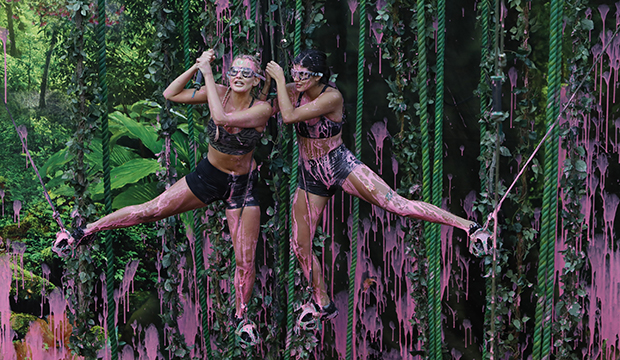 Sam’s big plan lasted all of a day. After coming up with a speech and going through it with Cliff Hogg III and Nicole Anthony, he decided on Tuesday afternoon to scrap it and go out on a good note. Note to Sam: It would be a good note for all of us if you go HAM to expose Christie. Sam had second thoughts after Nick Maccarone suggested to him that a petty speech wouldn’t work anyway because Christie is good with everyone and it would hurt more than help him, Cliff and Nicole. Coupled with what Analyse Talavera told him that Nick is a goner next week if he doesn’t win HOH or Veto again, Sam decided to deprive us of what little joy and excitement we could’ve had this week.

“Even if I wanted to, I can’t blow up somebody. If it is my time to go, I would rather go and be liked,” Sam told Analyse. It’s like he just remembered Jeff Schroeder‘s go-to question — would you rather win and be hated by America or lose and be loved? — and chose the wrong answer.

Sam is still planning to campaign, focusing on Christie, Jackson Michie, Holly Allen and Jack Matthews because those are the “majority pushers.” I mean, yes, Holly is HOH this week, but if he only knew one of these things is not like the others. But he knows there’s a slim chance of it working based on the intel he’s gotten from Analyse.

Still in denial about his deferred fate is Nick, who thinks he can get back in with the Six Shooters again so they won’t target him next week. His grand plan to accomplish that? Not to target them. Nick made a final two with Cliff, so that means, if he keeps his word, his nominee options are down to Nicole, Jessica Milagros and Kathryn Dunn — one person who’s an ally and all three of whom are such huge threats right now. Not. “I would rather not take a shot at them [if I win HOH] and hope that they trust me again,” he told Sam. “If I take a shot, I am definitely gone.”

“But the way Sis talks to me, you are still going,” Sam warned. “Everyone is still talking about how you were supposed to go [this week], not me.”

Nick, they’ve already blindsided you and nominated you. If you win HOH, just go after them! Yes, Christie’s power is still in play (next week is the last week), but this when you try to work out something mutually beneficial (ahem, Jackson). As Sam later told Nick, “If you were to go after Jack and Sis or Michie and Holly, then Christie and Tommy [Bracco] would probably be in your corner.” But Nick still isn’t sure if that’s worth it than to play it safe. Sigh. It’s going to be Day 99 and everyone will still be like, “It’s too soon to target the six.” This would never happen on old school “Big Brother.”

The most frustrating part is, unbeknownst to Nick, the Six Shooters are ready to break. This week has seen the most infighting and gossip yet among them, and Analyse was the target of much of it on Tuesday. Holly and Jackson opined about how much her attitude “sucks. Then Holly, Kat and Jess concluded that Analyse is just a mean girl whose entire game is flirting, which is frankly giving her too much credit.

“It scares me knowing how she is playing. It makes me sad,” Holly said.

SEE ‘Big Brother 21’ spoilers: There could be fireworks at Thursday’s eviction, which may be our only source of fun this week

“She is not playing any games with anyone outside that six. She is breaking y’all up. That’s why I think Jack is in on it,” Kat declared. “She is dumb enough that he can send her in to do her mean girl stuff.”

Jackson got word that people think he disrespects women (DR hint?) and went on a whole spiel about how he doesn’t, etc, etc, and made the girls promise to tell him if he does. “It breaks my heart thinking about the fact that someone could sit here and say that I am disrespectful towards women,” he said. To pile on Analyse even more, Kat determined that it was her who said that about Jackson (as we know, it’s Christie).  “I do think it’s a very low blow of Sis to create a scenario in her head that Jackson doesn’t respect women,” she told Holly, who both chalk up Jackson’s behavior to his frat boy immaturity. ” [That] Jackson is going to take over your HOH, Jackson is going to make sure that you play his game.”

To be fair, everyone was saying Jackson would take over Holly’s HOH. But don’t worry. Kat still hates Jackson’s guts and wants to be the person to take him out. “[Christie] was like, ‘I want to use my power to backdoor Jackson.’ I was like, ‘If anyone backdoors Jackson, I want it to be me,'” Kat said.

So Sam is still doomed unless he does something major on Wednesday to turn this around, which won’t happen. No one is going to get rid of Kat over him, especially now that the Six Shooters are on the brink of fracturing. At least we have that to look forward to.