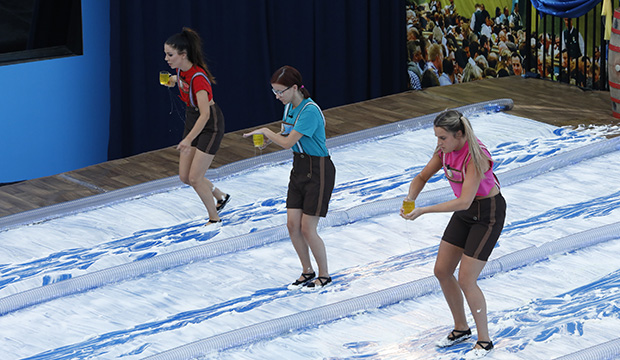 Monday’s Veto ceremony went as expected on “Big Brother 21,” because Jackson Michie was never using that Veto, and just as predictable, Christie Murphy and Analyse Talavera went on another pity party afterward. This time, they had a new target: Nick Maccarone.

The two went on a rant — or really, it was Christie ranting and Analyse agreeing since words are hard — about how Nick is a sneaky bastard and he has been playing all of them because he’s working both sides and is throwing comps, and he’s getting away with it. This, in their minds, is evidenced by the fact that Nick was not nominated this week even though he was the one who started the NuSix to take down Jackson and Holly Allen.

This alone just epitomizes their fundamental misunderstanding of the situation. Yes, Nick is smarmy, yes, he’s playing both sides, and yes, it’s working. Hate it or love it, but it’s working enough that he was not a target for Jackson this week. They still don’t truly get how they cause their own problems because they blame everyone else for them. Jackson’s beef has been with Christie since the Six Shooters blowup, and Analyse is collateral damage to take away a vote from her BFF.

Analyse had a chat with Nick, and to her credit, she did try to question him on his game and whether he’s been throwing comps. The problem with this is that Analyse is staying this week and she’s going to need Nick moving forward, so no need to burn that bridge too much, especially since Nick has repeatedly told her that she and Tommy Bracco are his final three. Nick has his head (and hands) everywhere, but he has been consistent about being loyal to Nicole and taking Analyse and Tommy to final three. He told Analyse that if he won HOH, he’d put up his new enemy, Jessica Milagros, with either Holly or Cliff Hogg III.

After that interminable convo ended, Christie informed Analyse of her great new plan: She will blow up Nick’s game during Taco Tuesday by asking him who he is really loyal to. “I am going to blow up his game. I am going to put him right on the spot,” she said. “I hope that someone initiates a gratitude circle. I’m going to say, ‘Who exactly are you loyal to, Sis and Tommy or Cliff and Nicole [Anthony]? Or is it Michie and Holly?'”

Dear “BB” Gods: Please let this happen. The only reason it might not is not just because Christie says she might chicken out, but because she and Nick had a one-on-one themselves Monday . night, in which Christie insisted about 12 times she’s not mad. The lady doth protest too much.

“I don’t feel like you owed me any type of loyalty, but I am watching you promise a lot of loyalty to people that I care about. I feel like you aren’t loyal to any set group,” she told him. “I feel like everyone thinks that you have got them, and you will continue to throw comps and let people take shots at each other. It’s something that I have a hard time respecting.”

Nick said that he never threw any comp other than Time Me a River and reassured that he was going to put up Jackson and Holly if he had won this HOH, though Christie is not buying it. She then brought up Jack Matthews and how Nick acted like he wanted Jack to stay, but he never actually wanted to keep him, which is true. Nick argued that he evicted Jack because he was a threat. He promised that he’s loyal to Tommy, Analyse and Nicole and then was all like, “I can’t help it if everyone else likes me.” No, really, he actually said that. That’s the game equivalent of Analyse saying, “I can’t help it that I’m hot.”

Christie and Analyse’s issue with Nick and both pow-wows were hilarious because the woe-is-me girls truly have no self-awareness. Their argument is basically: “How could you not be loyal to us after we formed an alliance within Gr8ful that you and your girlfriend were not part of, blindsided you during your HOH, evicted your girlfriend and best friend back to back, and were about to evict you until you won the Veto? How, Nick, how could you not be loyal?!” Really, Nick has more reasons than Jackson to not to owe them anything.

SEE ‘Big Brother 21’ spoilers: Christie just made a desperate pitch and Jackson straight-up snapped: ‘F— it and f— them too’

During all this, the others started to suspect that Jess is at the root of the Nick hate. Tommy told Analyse that he trusts Nick and thinks Jess planted the seeds to Christie, and Analyse, of course, agreed. Nicole, meanwhile, told Cliff that she thinks Jess is unraveling because Jess told Christie that Nick is telling Nicole to target Analyse and Tommy and that he’s telling Analyse and Tommy to target Nicole (got all that?). “I love Jess and I saw us four going to the end with Kat [Dunn]. But she is scaring me a little bit, constantly looks like she is going to explode,” Nicole said.

Well, if there’s anyone who’s going to go after Jess, it’s Nick. Later at night, Nick told Cliff he plans to put up Jess and Holly if he wins HOH. Neither of them wants to go after Jackson because he didn’t target them. Plus, Jackson has been trying to finalize a foursome between him, Holly, Cliff and Nicole, all of whom appear to be on board.

As for Christie and Analyse, well, they ended the night with Analyse pleading with America to give her a power for the 13th time (take a hint from the Field Trip, Sis) and Christie worried about being hated by America because she just can’t understand why. Don’t worry, this whining will come to an end soon.

So right now, it’s just a countdown to Christie’s eviction on Thursday. She knows she’s going, but you’ll be dumb to think she won’t stir up drama before she goes. Nick got the brunt of it on Monday and may still more of it during Taco Tuesday. It’s unclear if Christie will still go through with that, but if she does, that’ll give us a lot to tacobout.