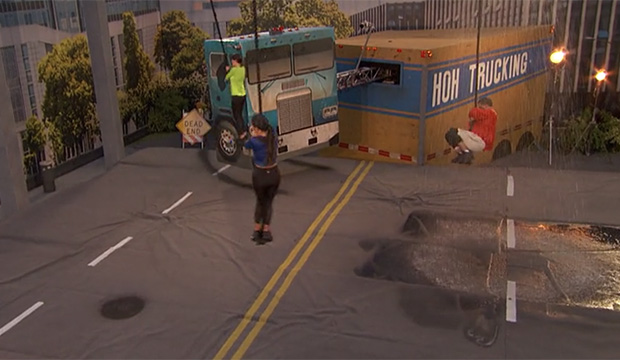 Monday was pretty much a snoozefest in the “Big Brother 21” house, as the Veto meeting didn’t happen as the houseguests expected (it’ll happen live on Thursday’s show). The final four is usually a fast-forward week with a taped eviction (and a brutal 36-hour feeds shutdown), but since there’s no jury Battle Back this season, the final four is a regular ol’ week. So instead, Monday was a lotta lounging and games, but Nicole Anthony and Cliff Hogg III did sneak in some game talk to come up some pitches for Jackson Michie to keep him.

First, Cliff, who vowed to push hard for Nicole in jury, admitted that while he had previously said he might vote for Holly Allen to win in a final two against Jackson, he now acknowledges that he might feel differently when he’s in jury and not as upset with Jackson and would respect his game more. Still, that doesn’t mean he can’t pollute the jury — or at least threaten to. He and Nicole think his best pitch is to tell Jackson that no one in jury will vote for him to win once Cliff tells them he broke their deal.

“I think the whole jury thing is a good point,” Nicole said. “That you will be walking into jury saying Holly adhered to her word, Michie did not.”

SEE ‘Big Brother 21’ spoilers: The final 3 is all but locked after another broken deal

It’s not a terrible idea, and if it’s a bitter jury like it has been in recent years, they might not vote for him. But if Jackson were in the final two, he’d get to argue how Cliff and Nicole betrayed him and Holly first by thinking about keeping Tommy Bracco, so he had to do whatever it took to save his gal.

Nicole, who thinks Jackson is torn about evicting Cliff (lol, he’s not), also gave Cliff the green light to pull a Jackson and tell him he’d take Jackson to final two even if he has no plans to. She also said she would promise Jackson the same if she thinks they’re in dire straits by Thursday morning. “If you need to promise to take him to the final two, whether you decide to or not, do it,” she said. “I’d rather come in third with you two than come in third with them two.”

Again, not a bad idea, but it probably doesn’t help that Cliff already clarified to Jackson a few days ago that he would take Nicole to final two over him. Now, yes, desperate times calls for desperate measures and he could theoretically sell his soul to get Jackson to keep him, but Jackson 1) already feels burned by Cliff and Nicole and 2) knows Nicole is upset about Cliff getting the boot and wants to keep him, and she’d never take Jackson over him to final two. Basically, their roles are switched this week with Cliff being Holly, but Jackson is smart enough to realize they’ll be busting their asses to save Cliff (Nicole did suspect Jackson was lying last week, but she had Cliff weighing her down; Jackson also has no other person to consult with as the sole vote).

Their final plan of attack is to play up Cliff’s age. Imploring Cliff to “pull on those heartstrings,” Nicole told him to tell Jackson that he’s old and probably won’t get another shot on a TV show, while Jackson will have a ton of opportunities (God forbid).

“I would play on the ‘Michie, I’m 54 years old. You have your whole life in front of you. You might be on ‘Big Brother’ again, you might be on The Challenge,'” Nicole advised.

“I will,” Cliff said. “I’m not going to be on TV shows again. This is my one chance for my family.”

Oh, yes, please mention “The Challenge” again so Holly will flip out again over Jackson possibly hooking up with women on a show he’s not even cast on. This actually might be Cliff’s best shot here. Jackson might get so peeved with Holly again that he would cut her and go, “You know what, Cliff? You believe in my dream to go on ‘The Challenge.’ Holly doesn’t. I’ll keep you, pal.”

Actually, this is not out of the realm of possibility, but Jackson won’t budge on evicting Cliff. Yes, he flipped to keep Christie Murphy, but that was on account of a brilliant move by her to attack Nick Maccarone. Christie is also far more persuasive of a talker than either Cliff or Nicole, who are way more rational than Christie. Plus, it’s too close to crunch time now for Jackson to back down. He and Nicole had a chat later on, during which Nicole tried to paint it as she wanted Tommy out at final four so she, Cliff and Jackson would go to final three, but you knew Jackson was not buying what she was selling.

There’s still a few days to go, but Cliff is a dead man walking at this point.