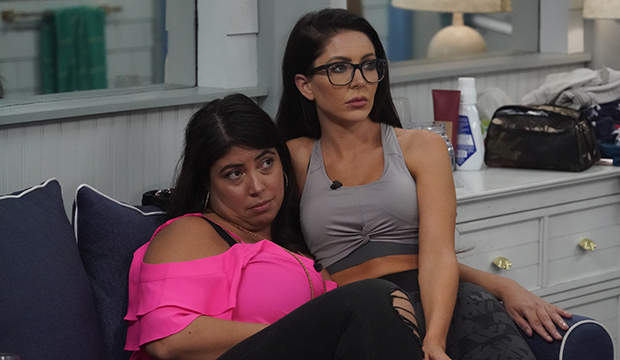 For the first time this season on “Big Brother 21,” the HOH has also won the Veto. And who would’ve thought it would be Jessica Milagros who would be the one to not only seize all the power for the week but make some baller moves? But here we are. She put two of the biggest threats, Jack Matthews and Jackson Michie, on the block and came up with a great plan to get her actual target, Jack, out. But since no one can shut up in this house, that blindside might not be much of a blindside anymore.

After the Six Shooters self-destructed before Thursday’s live show, Jess’ grand plan is to pretend like Jackson is her target since the former dominant alliance has become Jack, Christie Murphy, Tommy Bracco and Analyse Talavera vs. Jackson and Holly Allen. Jackson and Holly know about this, and Jess can secure the votes to boot Jack, whom she is certain would never work with her while Jackson might, via Holly, Nicole Anthony, Kathryn Dunn, Cliff Hogg III and Nick Maccarone. At worse, it’d be 4-4 and Jess would break the tie, but she hopes it’s an easy 5-3.

This scheme was made infinitely easier after Jess claimed the Veto, which not only means she can keep her nominees the same, but Christie’s Panic Power will not be used. Christie had already told Jess beforehand that she wouldn’t use it to save Jack, but since Jess won the Veto, Christie’s power, which expires this week, has been rendered useless. Her power gave the Veto holder, not the HOH, the right to name the replacement nominee, which in this case is the HOH. Another “Big Brother” power flop. Classic. But really the best part of the Diamond Power of Veto dying a meaningless death is that Christie cannot make this week all about her and her struggle over whether or not to use it and her guilt over it being/not being used. Because you know that would’ve happened.

So the week seems like it’ll be a walk, but not so fast. While Cliff’s Angels has basically solidified their alliance, Nick is still riding the middle, trying to be in good with both sides. He has told Jess he would do what she wants, but it’s less definitive than the other four, who are gung-ho “Let’s get Jack’s ass outta here!” Fearing she may not have Nick’s vote, Jess considered the idea on Saturday of taking down Jackson and renoming Nick to guarantee Jack would go if she needed to. Nicole also informed Nick of this, which was probably not the best move.

For a while, Jack, Tommy, Christie and Analyse were still feeling good about Jack staying, because that’s what Jess and Cliff’s Angels had been implying, before they finally realized that Jack could really get evicted because for the first time this season, they don’t have guaranteed numbers. Don’t you love it when the cocky people who were running the game don’t realize they can actually lose? Nick has also been fanning the flames by suggesting to them that Jack may not be as safe as they think he is without completely outing Jess’ plan.

On paper, it sounds like Nick is picking up where Isabella Wang left off and is running his mouth. But he has assured Jess, Nicole and Kat that he will do whatever Jess wants and is just playing the pro-Jack quartet. It feels more like Nick is planting the seeds to target Christie next week; he has gone out of his way to mention how he’s pissed that Christie spoke for him and told Jess that Nick would vote to keep Jack when he hadn’t said what he would do, not to mention drive home how manipulative Christie has been all season.

“She continues to lie her way out of everything to both sides. She is so dangerous in this game. She is the biggest threat in the house. Who is she loyal to? The people in power,” he pointed out toTommy and Analyse.

“It’s too much manipulation and too much crying,” he told Jack. “She gets out of everything. How are you taking the fall for what she did?

“Wish I could tell you,” Jack replied. “I think she is so convinced she is in the right that she just lies to herself.”

Sensing that things might not go their way, Christie, Tommy, Analyse and Jack have been campaigning to try to secure votes for Jack to stay. And it cannot be overstated how much fun it is to see them try to grovel (but not really) to people they’ve been badmouthing and bullying who now have something they want. They’re finally seeing how the other half lives without power. Cute.

By the end of Sunday night, they seem to have reached the acceptance phase of Jack possibly getting evicted. Christie and Tommy acknowledged that there are valid game reasons to boot Jack, and Christie told Jess that she’s fine if he leaves on a game level. After bemoaning about how things are “up in the air” after everything had been going their way (aw, boo hoo), Tommy told Nick that he’ll be sad if Jack leaves, but he gets it. Nick said it’s not definite that Jack is going, to which Tommy dejectedly said, “The writing’s on the wall.”

So even if Jess’ game plan doesn’t get entirely outed before Thursday, those four won’t be totally stunned if Jack goes. It’s less fun for us, but if we have to give up some jaws on the floor for the demise of one of the biggest threats in the house and the exit of the first person from the majority alliance, then it’s worth it. Unless a crazy last-minute development happens, Jess won’t use the Veto on Monday and she’ll get to finish what Cliff started.