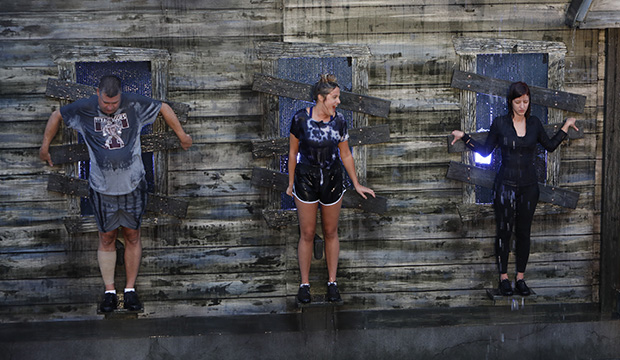 It was another low-key Taco Tuesday in the “Big Brother 21” house, but Tommy Bracco did sort of try to execute his plan to try to flip the vote to get out Cliff Hogg III instead of Jessica Milagros, which actually wasn’t as “risky” as he had advertised.

Tommy’s brilliant idea involved convincing Jackson Michie that Cliff has been working with Tommy and Christie Murphy, ergo Chris is untrustworthy. His plan required Jess to sell it to Jackson, but Christie pointed out that Jess would probably be uncomfortable lying. True, and also, she’d insert about 472 “likes” in there,  so who would even know what she was trying to say? Christie suggested that they try to get Nicole Anthony’s vote instead by telling her that working with Cliff, Jackson and Holly Allen isn’t good for her game because they’d all beat her. Tommy thought it was genius because Nicole loves pitches (does she though? She collapses into agony whenever she’s torn and she hasn’t gone against the majority the past few weeks), so the two of them coached Jess on what to say to Nicole.

Jess made her pitch to Nicole, which included a ton of hand gestures and her vowing to target Holly and Jackson, saying that she’s willing to be a pawn if either of them won Veto. She doesn’t think Cliff would go after Jackson because they’re tight, and then has the gall to tell Nicole that Cliff cannot be trusted because he turned on Kathryn Dunn to save himself, so he might do the same to Nicole. Um, weren’t you the one who blew up the whole house after Nicole trusted you with key intel about the group? Nice try. Jess also told Nicole that she’s been her No. 1 this whole time. Another lie. Jess’ besties were Kat and inexplicably Christie, whom she’s still seeing with rose-colored glasses somehow. Don’t worry, Nicole called B.S. on that to live feeders later.

SEE ‘Big Brother 21’ spoilers: Tommy is totally onto the new final 4 and has a ‘risky’ plan to flip the vote

“Her argument is that I always was her person. No, I wasn’t. Her person was Kat. I know her and Kat had a final two. I have been loyal to Cliff longer, I have been aligned with Cliff longer,” she said. “When she says to me, ‘I never questioned your trust,’ — yes, you did. A couple of days ago you cried to me and said that you didn’t trust me.”

Nicole told Jess she would think about it, and Jess reported back to Christie that the chat went well, but Nicole was concerned about Tommy and Christie working with Jackson and Holly. So then Christie pitched to Nicole on behalf of Jess, swearing — all together now — on her sister’s life that she and Tommy are not working with Jolly and that she would target Jolly if she won HOH because their agreement is done. She argued that the quad of her, Nicole, Tommy and Jess is better for all of their games because they all have a shot at winning, whereas none of them can win against Holly, Jackson and Cliff.

Nicole said she doesn’t know what Cliff would do if he won HOH, so Christie said she would talk to him on Wednesday because she’d consider throwing HOH if she knew he would go after Jolly. She said whatever Nicole decides is how she and Tommy would vote because Jackson would break the tie anyway, and he wants Jess out. Tommy then tried to schmooze Nicole and hammer home that Jess would be a great pawn going forward (uh, going forward where? There’s three weeks left).

“It always comes down to me,” Nicole lamented to live feeders. Hey, at least it gives her something to do in the game.

Jess and Christie, especially, made some salient arguments to Nicole, but she likely won’t flip. There might’ve been a greater possibility had Jess not burned Nicole (don’t forget, she was pissed at her for like a week after Kat left), but Cliff has been her ride-or-die, and Nicole herself wants to go after Tommy and Christie, who are obviously trying to downplay how much of a threat they are. Plus, it’s a numbers game.

“If I keep Cliff, that’s my guy, and Michie and Holly wont be mad. Christie and Tommy already know how I feel about Cliff, so they wont be mad,” Nicole rationalized. “That’s five OK people. One is five happy people, the other is three.”