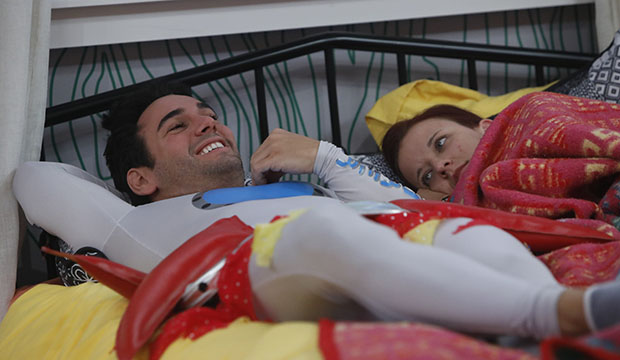 As everyone knew he would, Tommy Bracco used the Veto on Christie Murphy on Monday on “Big Brother 21,” so we’re back to two nominees, Cliff Hogg III and Kathryn Dunn, since Christie was a special third nominee. And now we just count down the minutes until Kat’s eviction on Thursday. Because that’s definitely what it’s looking like more and more. It doesn’t help her that Cliff has found himself in a new sorta alliance.

While Tommy is desperate to reunite the Six Shooters, he also wants Kat out first to drive Holly Allen and Jackson Michie back to them. But it’s becoming more apparent to everyone that Holly and Jackson, who are close to Kat and are leaning towards keeping her, are not interested in getting the band back together (as they shouldn’t be). Nick Maccarone has been pushing to form a new six of himself, Tommy, Christie, Analyse Talavera, Cliff and Nicole Anthony, with the goal of using Cliff to help evict Jackson and Holly (Jackson especially) and getting to the final six, where they would then cut Cliff and Nicole at fifth and sixth. With the leftover Six Shooters on board, Nick pitched Cliff the new group, telling him that if he agrees to it, he’ll lock in the votes to stay. Cliff was all about it.

“I would do that in a heartbeat, and I would give my word to all five,” he told Nick.

“We are not going to say anything to Nicole about it. Nicole kind of already knows,” Nick replied.

Nick relayed the info to the others, who are content Cliff is on board (you know they would’ve laid into him for being stupid if he hadn’t taken it like they did with Jack Matthews‘ deal), and by the end of the night, Cliff told Tommy himself that he’s down with the loose alliance and will shake on it. Does Cliff actually want to work with these people? No. He wants Christie out as much as anyone not named Tommy. But he’s doing what he needs to do to survive and advance. In retrospect, Cliff making that deal with Christie to not use her power and he would put up Isabella Wang has arguably paid dividends since he’s proven to be a man of his word. There’s also the fact that the others think he’s weak and injured so he’d be easier to take out down the road, but he admitted to Nick that he’s been playing up his injuries.

Meanwhile, Kat campaigned but grew increasingly frustrated at the lack of headway she was making. At one point, Nick called her out for claiming she’d target Jackson if she were HOH because she spends too much time with Holly and Jackson for that to be believable. “I feel like I spend a lot of time with everyone,” she argued.

“I’m just saying that I would be shocked,” Nick said. “I just don’t believe you, to be honest with you. I’m not calling you a liar. … How can you hang out with someone that much and go around and say that you are going to put them up?”

Kat said that the “lie” that was told about her — Jackson telling Jack that she and Holly knew each other — almost caused the house to flip the vote, so that’s grounds for her to nominate Jackson. “It makes complete sense. All I’m saying is you hang out with them a lot to be like, ‘I am putting them up,'” Nick said.

SEE ‘Big Brother 21’ spoilers: Tommy’s plan is back on track because the universe hates us

Honestly, it was not a great showing by Kat here. Kat knew she would draw the line in the sand when she voted to keep Jackson last week, so she might as well own it. She keeps falling back on the “my vote didn’t matter” line to “explain” her vote, but everyone has noticed how much closer she is with Holly and Jackson than even to Jessica Milagros — Cliff pointed out how she went straight to Holly and Jackson after the Veto meeting. Some of these people may be insufferable dicks, but they’re not dumb (well, except for Analyse; no shade, straight facts). She was ill-prepared for Nick’s line of attack, and it also doesn’t help that Holly has not-so subtly been campaigning on Kat’s behalf to no avail.

“She might put up Nicole,” Holly told Analyse, trying to argue that Kat wouldn’t target Analyse.

“But they are friends,” Analyse retorted.

“Or Kat might put up Nick,” Holly countered. “She thinks that he is so degrading and disrespectful because he always talks about her boobs and says inappropriate stuff.”

When Analyse has clocked you, you know you’re not doing too hot. (And yes, Nick is super gross with all his comments about everyone. Wonder what Bella thinks).

By the end of the night, Kat was growing sick and tired of no one believing her that Jackson is her target. “I am honestly just so tired of people cornering me and asking where my head is at when it’s none of their business. Why am I trying to impress them?” she cried to Holly and Jackson. Um, because you want to stay? Holly and Jackson encouraged her to keep campaigning, with Holly advising that she flatter Analyse by pointing out how she questioned the vote-flip against Kat. That led to this fantastic exchange.

“[Analyse] doesn’t understand nouns or adjectives, so I have got to break it down,” Kat said.

“I also had to describe the summer solstice to her today,” Holly shared. “She had no idea what that meant.”

“All right, mean girls, back to game talk,” Jackson said.

What a low-key drag. Jackson has been so much more tolerable since he split from the Six Shooters and Jack has left.

Kat suggested that she and Jackson stage a fight to feign a rift between them, but he nixed it because he’s already “America’s least favorite player.” Jackson, I can assure you that you are the third least favorite at worst, and if you do this, you’ll become one of our favorites.

Based on how everything had gone down, Holly and Jackson soon figured out that Nicole and Nick may have replaced them in the six. “If they did, then we are f—ed,” Holly said. Later, when Jackson straight-up asked Tommy if that’s the case, Tommy, of course, denied it. But you know Jackson is not buying that.

So with Cliff sitting nicely in a new majority, Kat has her work cut out for her to save her “Big Brother” life. If she remains on the “Jackson is my target” party line while still hanging out with them, that’s likely not going to get her anywhere.