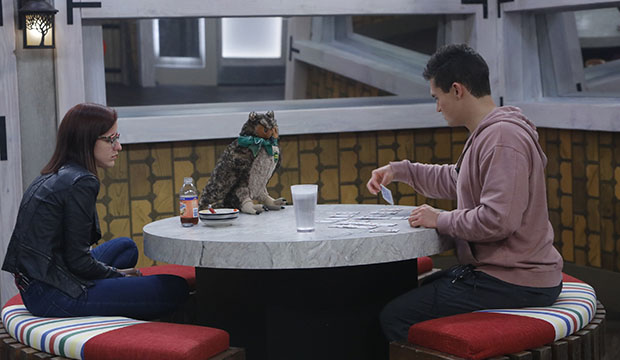 Well, it’s going to a slow march until Wednesday’s “Big Brother 21” finale. Jackson Michie won Part 1 of the final HOH and Holly Allen won Part 2 on Saturday, so there is absolutely no suspense here. They’re going to take each other regardless of who wins Part 3, and Nicole Anthony will go out in third. Or will she?

I mean, yes, she will. But she’s not giving up yet. After a rough Saturday following her loss — for which, honestly, she only has herself to blame because it was a days comp and she’d always been mentally superior to Holly, who rarely studied the days — Nicole casually got in some campaigning late Sunday night to Holly. She told Holly that she’d be seen as her own player if she evicts Jackson at final three, and that both she and Jackson would beat her, Nicole, in the final two. She pointed out Jackson’s lengthy resume and that he could claim credit for Cliff Hogg III‘s and Tommy Bracco‘s evictions since he masterminded the reverse flip for the latter to save Holly and by extension himself.

Holly kind of just stared blankly and nodded, every now and then saying that it’s “hard” and she’s thought about it. Has she though? She honestly seems content to just get to final two with Jackson and only Jackson. Nicole is doing the smart thing here by treading lightly. She’s not delusional to think there’s a snowball’s chance either of them will take her, but she’s not going to throw in the towel and sulk and complain. Plus, the hilarious thing is that Jackson and Holly know they have to tread lightly around Nicole too because they don’t want to rub it in her face too much even though everyone knows what’s going to happen.

Nicole has also been masterfully trolling them. This exchange about the infamous HOH shower stool, aka the sex stool, on Sunday was a top 10 moment.

Nicole: You know what Julie .. cuz I fucked myself. ❤️#bb21 pic.twitter.com/J9hS5EfKok

Later, Nicole had a one-on-one with Jackson, who came clean about his big fat lie about Tommy. He admitted he eavesdropped on their conversation and twisted it around to target Tommy. Nicole was like, “Well played,” but we knew from her Diary Rooms that she had already suspected Jackson was lying. But look at Jackson trying to work those jury votes!

Ever since Cliff threatened jury votes to Jackson, he has been more paranoid, and he even admitted to Holly that he was worried that she would burn him by not taking to final two. Holly said she wouldn’t and hopes he doesn’t burn her.

“I never would. If I wanted to, I could have done it last week with a guaranteed final two seat,” he said.

“At this point, do you know how horrible it would look?” she asked.

Actually, it would look pretty great if one of you had the balls to cut off your own showmance. But that’ll never happen. Plus, Nicole is a rather formidable opponent for both of them to go up against, and they’d both rather take the risk going up against each other than against her.

Also, production needs to inform Jolly that they are not the first showmance to make it to final two (Boogie and Erika did it on all-stars) as they both currently believe.

As for Nicole, she’s trying, which is all she can do at this point, but she knows it’s useless. She knows she did this to herself by not keeping Tommy; she made her bed and now she’s gotta lie in it.

“In the grand scheme of life, Nicole will be OK. She had an amazing experience, she loves this game, she is going to see her family, and she is still Nicole from ‘BB21,'” she told feeders. “If one of them chooses me, I will be hella shocked and thankful, but I’m also a realist and realize that I could be walking out third.”

'America's Got Talent' episode 8 recap: Which acts get four 'yes' votes based on the July 20 auditions…