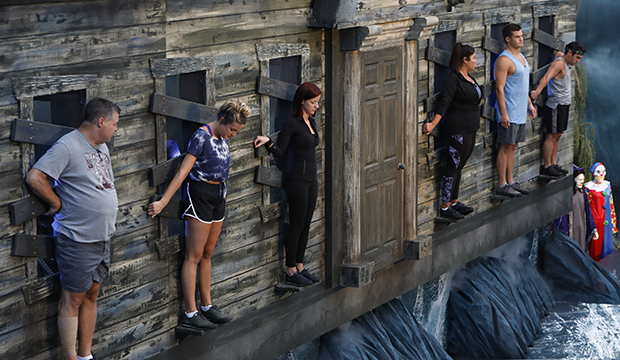 Wednesday brought on more campaigning in the “Big Brother 21” house, but the biggest thing that happened was that Holly Allen was sick. No, just kidding. It’s that the sides are even more clear for what will be a pivotal double eviction on Thursday.

Jessica Milagros will be the first evictee. Sorry, Jess, you tried. Her pitch to Nicole Anthony was OK, but it was B.S. because Nicole was never her No. 1, as she claimed, or someone she always trusted, since she’s said multiple times in the past few weeks she didn’t trust her. Jess made a last-ditch campaign to Holly and Jackson Michie, arguing that Cliff Hogg III is a bigger threat and someone who has a greater chance of winning than she does, and that it would look better on Jackson’s resume to say he got him out instead of her and Analyse Talavera.

But as we all know, Jackson would keep Cliff in a tie because of their final four with Holly and Nicole. Interestingly, Jackson and Nicole agreed earlier in the day that keeping Cliff may not be the best move for their respective games, but they are loyal to him and have a deal. And in Jackson’s case, as he pointed out, if Cliff goes, that makes things easier for Christie Murphy and Tommy Bracco. He thinks Christie and Tommy are too scared to take a shot at him and Holly, so they want other people — Nicole and whoever stays of Jess and Cliff — to do it for them. He told Nicole that Christie is also setting up Nicole and Cliff to take a shot at Jackson and Holly for them.

SEE Breaking down the ‘Big Brother 21’ double eviction: Who’s in danger? Who’s the safest of them all?

This is true, but it’s also hilarious because it’s what Jackson and Holly are doing, albeit not as aggressively since they have the final four deal. They’ve thought for a while that they’re in the middle of the three duos when it’s really Cliff and Nicole who are the middle duo. They’re the beta. Christie and Tommy, and Jackson and Holly are alphas. No one is looking to take out Cliff and Nicole if the alpha options are on the table.

Christie, of course, has sworn on her sister’s life and the Bible to Nicole and Cliff that she would put up Jackson and Holly if she won HOH, which Nicole and Cliff relayed back to the couple, so it’s basically game on now. Nicole and Cliff, who got a mild case of paranoia when he thought Nicole might evict him, were torn for a hot second on which way to lean, but they decided to stick with their final four. Nicole said she would nominate Tommy and Christie with Jackson as a renom option. That meant carefully navigating how to discuss future plans with Tommy and Christie.

Cliff went the route of vaguely telling Tommy and Christie what they wanted to hear, but making absolutely no promises or deals. He told Tommy that he is not his target and asked Christie to have his back if he goes after Jolly. When he reported this back to Jackson, the watermelon lover said it’s good that Tommy and Christie think Cliff might target Jolly because they might not gun as hard for HOH. This was confirmed later when Christie told Cliff that she would throw HOH to him once Holly was out. Cliff and Jackson also decided that if Tommy and Christie are on the block, they would evict Christie and end her 4892 lives in this game.

The best part of all this is how Christie and Jackson acted like everything was kosher between them when they both know it’s not.

Christie: “I don’t want you to feel that. I am off today, but it’s not with you.”

SEE ‘Big Brother 21’ spoilers: Operation Flip Nicole has commenced, but it will probably be a bust

After Christie left, Jolly went to town about how shady Christie is. Holly doesn’t trust her says she’s “full of sh–.” Jackson said Christie claimed their deal is still good (she did say that, but we all know she’s lying) and she’s not coming after them, but he knows it’s B.S.

“She swore on a Bible, on her sister, and I wanted everyone to hear her say that. If she goes back on it, let the pitchforks come out,” Jackson said. “I wanted it to be heard by all of America. I repeated it multiple times.”

“Nothing that she says holds any weight,”  Holly pointed out.

“If she wants to win and show her cards, that’s two jury votes either way that she will lose,” Jackson fumed. “If I was her, I would throw the f— out of [the HOH].”

You know, guys, you wouldn’t be in this position if you had taken her out when you literally had the chance to do so, not once but twice.

Needless to say, the double eviction will be a biggie. The houseguests have discussed the possibility of one this week, so it won’t be a major surprise.