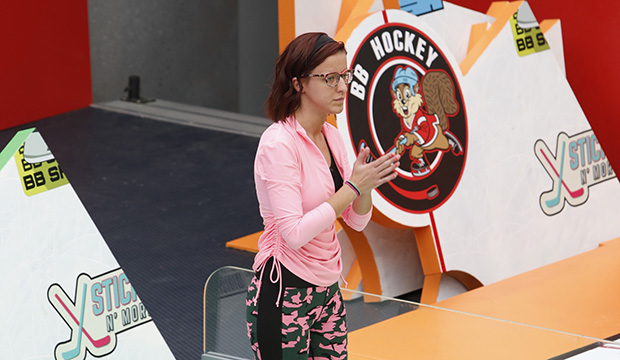 It only took 11 weeks, but Nicole the Savage Competitor has been unleashed. After winning the double eviction HOH on “Big Brother 21” last Thursday, Nicole Anthony followed it up with a pivotal Veto win, dominating BB Comics in a blistering 10 minutes and 58 seconds on Saturday — almost four minutes faster than the next closest time by Tommy Bracco and almost four times faster than Holly Allen‘s pathetic 38 minutes — and now she’s contemplating a huge blindside plan.

Nicole is definitely taking Cliff Hogg III off the block with the Veto, which means Jackson Michie will have to nominate Holly by default to sit next to Tommy. She’s the last person not to have hit the block yet, so it’s about time. Since Nicole, Cliff, Jackson and Holly have a final four, you’d think this week is a done deal and Tommy will waltz out the door on Thursday. But not so fast. After telling Jackson and Holly that there’ll be no “funny business” after she Vetoes Cliff, Nicole started having second thoughts and now wants to boot Holly and keep Tommy.

Despite their deal, she knows it’s stupid to go to final four with a showmance, half of which is a comp beast (Holly’s been flopping lately). She also believes she’ll have a better shot at final two if Holly’s gone because there’s a chance Jackson would take her in that case, but if Holly stays, Nicole is out. She floated the idea to Cliff, who is open to it, but he needs to sleep on it more because he’s more married to the idea of being loyal to their deal. Nicole pointed out that they’d get credit for breaking up the remaining two duos, which would make a great argument for the win.

Nicole clued in Tommy, who fully expects to leave this week, on her plan, telling him to work some campaign magic on his own to help them pull this off, not to mention completely flip Cliff. He, obviously, was on board.

“I would rather go into final four with you potentially not siding with Michie as opposed to Holly, who obviously will,” Nicole said. “If you win Veto, at least there is somewhat of a chance.”

“It’s not just somewhat; it’s what it would be,” Tommy assured her before thanking her for “entertaining the idea.”

“Because it can happen, it’s smart to have happen, and it should happen,” Nicole said. “[Cliff] is like, ‘I need to weigh out the pros and cons of everything, but I hear what you are saying and it is very true.’ The second that Cliff tells me that he is on board, it’s a done deal.”

Tommy plans to talk to Cliff, but Cliff wasn’t completely resistant to the idea, so the underdogs could actually pull this off. There, are, of course, pros and cons to keeping both Holly and Tommy. If Holly stays, Cliff and Nicole will be seen as loyal, and Tommy, who’s a better physical competitor than Holly, would be out. But Holly is Jackson’s No. 1. If Tommy stays, Jackson’s closest ally is gone and they could all go after Jackson, the best competitor left, next. But Cliff and Nicole could be painted as traitors, both Jackson and Holly could be bitter, and there’s a risk of Tommy and Jackson linking up to target Cliff and Nicole, the last duo. Tommy has promised Nicole he wants to go to final three with her and Cliff, but he’s always been closer to Jackson, so who knows what he’d do if the time comes besides tell Jackson they should get the Six back together.

Meanwhile, Tommy told Jackson and Holly on Saturday that he knew Christie Murphy in real life because she dated his aunt for seven years. They were shocked, and Holly wondered afterward if other people also knew each other (since she and Kathryn Dunn were acquaintances). The feeds were cut while Tommy explained the whole backstory, likely because the aunt didn’t sign a release to be discussed on the show, so all we got were snippets of Tommy saying he felt like he had to align with Christie because of their relationship even though he didn’t agree with her and her gameplay a lot.

It’s hard to say what Tommy’s exact game plan is here — he was immediately called to the Diary Room, so we’ll probably see it in Wednesday’s episode — besides it being a Hail Mary. He can definitely garner sympathy if he portrays himself to be a helpless victim-ally of Christie’s and he could also use the secret to campaign to stay: “Keep me because no one would vote for me once they find out I had this unfair advantage!” He asked Jackson and Holly not to tell anyone, and they haven’t yet, and Tommy has not yet told Nicole or Cliff even after Nicole told him about the scheme to keep him.

It’s still a long way to go until Thursday, but what could’ve been a very straightforward week just got interesting.