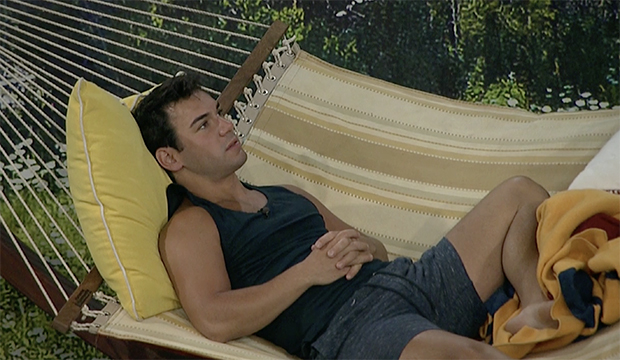 Is Jackson Michie‘s target on “Big Brother 21” going to flip for the second time? If Tommy Bracco has his way, then yes.

To be fair, Jackson’s target should have already flipped from Jessica Milagros to Christie Murphy or Tommy Bracco, but Holly Allen, Cliff Hogg III and Nicole Anthony weren’t able to convince him, or really tried too much to, before nominations. And after Tommy won the Veto and saved Christie, Cliff is now up, voluntarily, as a pawn to ensure Jess goes home.

Jolly, Cliff and Nicole think they’ve been so slick with their final four deal and that Cliff going on the block will deflect any suspicions that they’re working together (but also, unless Jackson had broken his promise to Tommy, his only renom options were Cliff and Nicole since he wouldn’t put up Holly, even though they had a major lovers’ quarrel this weekend, but that’s another story). But as we learned in Tommy’s and Christie’s Diary Rooms in Sunday’s episode, they think Jackson, Holly, Cliff and Nicole have a final four, and Tommy believed his suspicions were confirmed Monday night when the four of them had a meeting.

“It probably had to do with Cliff going on the block tonight. Just checking in, making sure they were still on the same page,” Tommy told live feeders around 3:30 a.m. PT Tuesday. “It seems we have a final four. How do I break this up? How do I weasel my way in there? … The sucky part about this game is that you can maybe see what’s going on, but not know what to do with the information. And that’s the position that I’m in right now. I see what’s happening, but I don’t know what to do with it yet. But I’m going to figure it out.”

Tommy said Jackson and Cliff are the two biggest threats in this house (lol, sure), so that’s why they are working together.  “Because one without the other can’t exist,” he mused. “Nicole and Holly are going along for the ride.” Hmm… you got one right there. Nicole is definitely going along for the ride since she’s done nothing so far, at least to win the game.

Then Tommy saved the best for last: His goal is to save Jess this week. “How can we do that? We have to plant a seed of doubt in Jackson’s head about Cliff,” he said. “We have to make Jackson doubt Cliff. I think I have a plan. I’m scared to do this plan because it’s risky, but I think I have a good plan.”

He didn’t elaborate on the plan or when he’s going to deploy it, but the question now is if it will work as well as Christie’s Expose Nick campaign two weeks ago to save herself. Probably not. Jackson has already said he won’t change targets this week because he doesn’t want that to happen on two HOHs.

Plus, after Jackson and Holly thought they were in the middle of the three pairs with Cliff and Nicole, and Tommy and Christie — even talking about throwing the next two HOHs — they’ve now wised up to the fact that Tommy and Christie might target them first because they’re bigger threats. And there’s the fact that Cliff told Jolly Monday night that Christie told him she thinks the four of them are working together. Jackson also appears very loyal to Cliff and Nicole (whereas last time he had no loyalty to either Christie or Analyse Talavera), but hey, no one ever thought he’d bend on letting Christie stay, and yet, here we are.