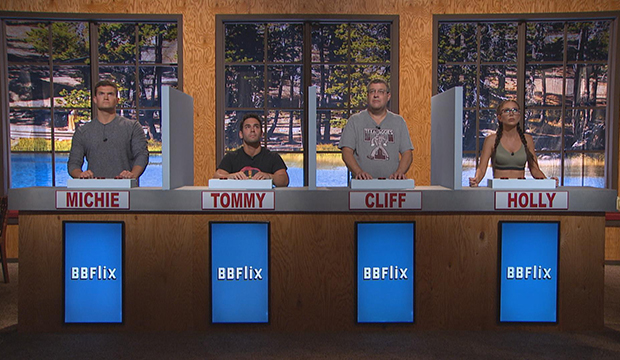 Tuesday was a chill day in the “Big Brother 21” house as there was nary any game talk all day until the Easter egg hunt in the evening (yes, they had an Easter egg hunt in September; this is what happens with five people left). Now, Cliff Hogg III and Nicole Anthony are on the verge of finding out Tommy Bracco‘s relationship with Christie Murphy, and Holly Allen is finally shaking in her boots that she might leave on Thursday.

It all started when Tommy told Holly he wanted to be honest with Cliff and Nicole about Christie and will let them make a fair decision based on that. “I think I would rather be the guy that maybe lost half a million for spilling a secret prematurely than the guy that lied. I am pretty sure that I am going to tell them tomorrow,” he said. In reality, he probably just feels bad he hasn’t told Cliff and Nicole yet when they’re the ones who are voting to keep him.

SEE ‘Big Brother 21’ spoilers: The vote-flip (sort of) gets the green light and Tommy makes an enticing offer

Holly got spooked that Tommy might use the secret to flip the vote, and she and Jackson Michie decided to get ahead of it by warning them that Tommy has a bombshell to share. When Jackson gave the heads-up to Cliff, who later told Nicole, he asked if it was related to Christie, and Jackson confirmed. (There was a backyard yeller a few weeks ago that played one of Christie’s DRs about Tommy. It’s unclear how much Cliff heard, but he told Tommy, who was very upset by it, that it didn’t matter. So he probably won’t be completely shocked to learn that they know each other.)

Cliff said he will hear Tommy out on Wednesday and then make a decision together with Nicole, even though it’s almost certainly to keep Tommy at this point. He also used this opportunity to hint to Jackson that Holly might be in danger, saying that Nicole’s been getting closer to Tommy and that he’d evict Tommy before Jackson if Tommy were to stay. Jackson was surprised Holly could leave, but said he understood if that’s the best play for them.

Meanwhile, Holly did a lame, half-hearted check-in with Nicole, telling her that she hasn’t been complacent this week (are you sure?) and “didn’t want to be like Kat [Dunn] and really nervous and paranoid.” Once Jolly regrouped, Jackson filled her in on what Cliff said, and Holly started panicking and wondering if she should’ve been campaigning more (ya think?). She’s upset she might get backdoored on Jackson’s HOH, except this isn’t a backdoor since she got to play in Veto and she was the only renom option. Jackson started brainstorming pitches for Cliff and Nicole, including telling them that this is more about evicting Tommy than it is about keeping Holly.

NiCliff had their own check-in, during which they agreed they’ll wait for Tommy’s secret, but as of now are still evicting Holly (in Cliff’s case, he’s just doing what Nicole wants because he promised he won’t split the vote). Cliff then noted to live feeders that he thought it was weird that Jolly talked to him and Nicole separately, wondering if they’re comparing notes now. Bingo.

This teed up what should be a far more interesting Wednesday. Everyone in the house will finally know Tommy’s secret. Will it affect Nicole and Cliff’s decision? Probably not. Nicole is hellbent on breaking up a showmance. And Holly and Jackson will scramble to try to save her, so there won’t be a total blindside on Thursday.