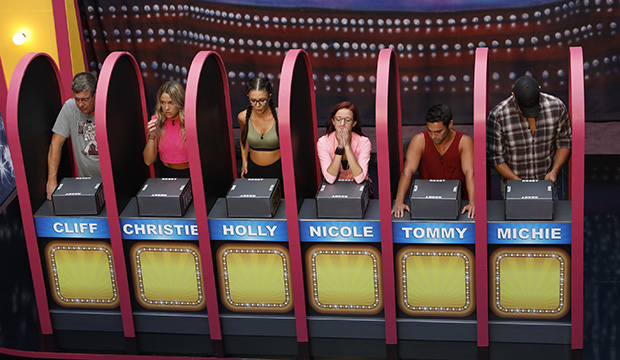 Expected the unexpected indeed. Not only did noted comp beast (sarcasm font) Nicole Anthony win the double eviction HOH on Thursday’s “Big Brother 21,” but the Week 11 HOH has not been played yet.

SEE: ‘Big Brother 21′ spoilers: Who won Week 11 Head of Household competition on #BB21 and who is the target?

Typically, the post-double eviction HOH is held shortly after the broadcast but not on the feeds (they need something to show on Sunday’s episode); however, such was not the case on Thursday. The feeds cut for a bit, but that was likely for TPTB to explain to the houseguests what’s going down, which is that the HOH comp will be played Friday morning, followed presumably by the nomination ceremony if the show wants to follow the usual schedule.

“Tomorrow will be a busy day. HOH and noms and who knows what all is going on tomorrow. Otherwise it screws with veto competitions and stuff,” Cliff Hogg III said to Holly Allen before production told him to zip it.

It’s unclear why the HOH was postponed. Did Swaggy C and Bayleigh Dayton get stuck in traffic? Because, you know, we are totally cool with them not hosting the comp. Or anything ever.

But the delay meant the final five could just chillax Thursday night and bask in the excitement of Nicole’s HOH win. The smile never left her face the whole night, and she got her HOH basket of unicorn-themed goodies and a letter from her parents. Honestly, seeing how happy everyone else was for her is one of the most genuine moments of the season. (Also, raise your hand if you saw Cliff throwing the HOH to her — he took a piece that was already in place and tried to shove it in a smaller space — but Nicole led that comp wall to wall anyway; she’s probably done a billion puzzles in her day job.)

Nicole also put in a few minutes with Tommy Bracco, who feels alone in the game now that Christie Murphy is gone. He told Nicole that he respected what she did by nominating him and Christie, and that she is not his target if he wins HOH. Nicole told him she respects his game and would love to move forward with him.

Later, she told everyone why she wanted Christie gone. “I just want you guys to know that my reasoning is because she survived the block so many times and was able to talk her way out of things. It could very well happen again and again and again,” she said. “It came down to which individual scares me. My answer was Christie.”

Tommy is arguably a bigger threat than Christie, but she’s had about 204 lives in the game, and at some point if you don’t take the shot, you might never have the chance to again. But now with her gone, Tommy is obviously next on the hit list since Nicole, Cliff, Holly Allen and Jackson Michie have a final four. Cliff and Jackson discussed how one of them would have to go up regardless next to Tommy if their group wins HOH, but it would be fine because they have the votes. “As long as [Tommy] doesn’t win the Veto,”  Jackson said before (correctly) guessing that it would be BB Comics. “One step at a time. We made it through a double and we got Christie out. Finally! Nicole got out Christie on a double! You cant write this sh–.”