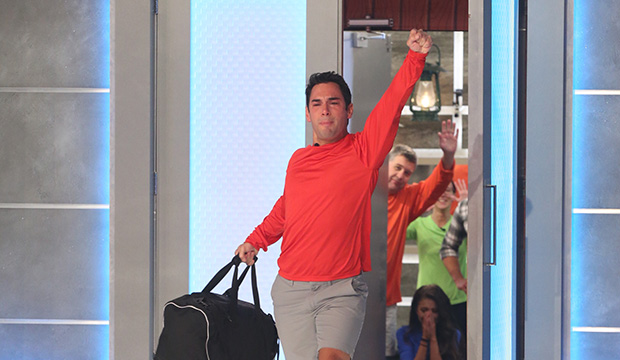 Did anyone go through a more insane roller coaster of emotions than Tommy Bracco did this week on “Big Brother 21”? First, he thought he was dead in the water after he lost Veto, only to get a “ray of hope” that he’ll survive the block when Nicole Anthony told him she wanted him to stay over Holly Allen, swaying Cliff Hogg III to vote that way too.

But then Jackson Michie once again put his covert eavesdropping skills to use and twisted Tommy’s pitch to Cliff and Nicole — he’d throw HOH and win the Veto to evict Jackson — as a big fat lie, leading to a fraught house meeting that we won’t even see until Sunday’s episode. That was all enough for Cliff and Nicole, visibly drained, to play it safe and evict Tommy like they had agreed to do in their final four deal with Jolly. And it was all enough to make you forget that Tommy told everyone this week that he knows Christie Murphy outside of the house.

So how does Tommy feel about Cliff and Nicole’s decision? And does he think Jackson and Holly will think he’s a hypocrite since he had accused them and Kathryn Dunn of knowing each other IRL? See what Tommy says in our exit interview, via email, below.

Gold Derby: What kind of campaigning, if any, did you do to Cliff and Nicole after the meeting?
Tommy: I told Cliff and Nicole that I would not only be a number for them going forward but I’d throw HOH to guarantee one of them would be in the final three spot.

Gold Derby: You were one of the people who thought Holly, Kat and Jackson might know each other in real life, and the Six Shooters self-destructed over that. When you told Jackson and Holly your secret about Christie, were you concerned they would think you’re a hypocrite and use that against you? Why or why not?
Tommy: I don’t think it would make me look like a hypocrite. I think it would explain why I jumped to those conclusions. Since Christie and I knew each other, it would explain that we aren’t the only ones in the house with [with a] previous relationship. I’m still not convinced Kat and Holly don’t know each other. I wouldn’t be surprised if that came out.

SEE ‘Big Brother 21’ spoilers: There is a new final 3 deal in place, but who knows if it’ll actually last

Gold Derby: How differently would you have played had Christie not been in the house?
Tommy: I would have aligned with Jack [Matthews] and stuck with him as long as possible. If Christie wasn’t in the house, it would have been easier to keep my alliance together and that ultimately could have been better for my game.

Gold Derby: You wanted to go to final three with Cliff and Nicole. Why didn’t you try to work with them earlier, especially as your allies were getting picked off?
Tommy: I had been planting seeds for weeks prior and that’s why I was surprised when Nicole put me up. But they didn’t bite, and now I know why.