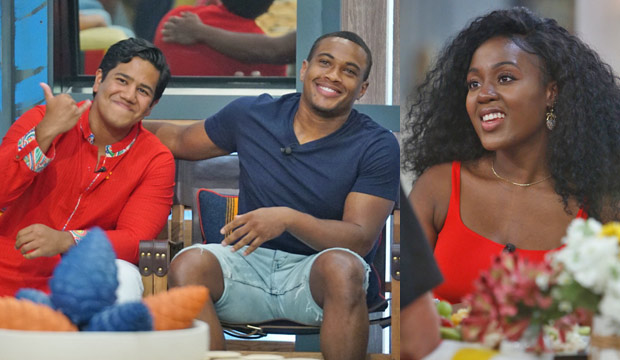 It’s a twist like no other. Instead of going home or being sequestered privately, the first contestants eliminated from “Big Brother” Season 21 have been allowed to stay inside the house, aka Camp Comeback, to continue playing the social game. As Julie Chen Moonves explained, one of the first four players to be banished/evicted would have the chance to return as a full-fledged player, with the battle back competition scheduled for after the fourth elimination. So who do YOU hope returns to the game: David Alexander, Ovi Kabir or Kemi Fakunle? Vote in our poll below.

David was the first person to leave “BB21” thanks to Camp Director Jackson Michie banishing him on Day 1. Jackson also banished Cliff Hogg, Jessica Milagros and Kemi to the “Big Brother” wilderness, but those three were able to find their way back to the house. At the time Julie teased that David was only leaving “for now,” a promise that was fulfilled when he returned to the house on Day 15 following the first live eviction.

Ovi was voted out of the game during Head of Household Christie Murphy‘s reign by a unanimous 12-0 vote over Kathryn Dunn. Before he could walk out the door for his one-on-one interview with Julie, an announcement informed the players that the Camp Comeback twist was now in play. Ovi was shocked to learn that he would stay in the house, living in the upstairs “camp” room with David, though they would not be allowed to play in competitions or partake in ceremonies.

Last week Kemi became the third member of Camp Comeback after HOH Jack Matthews finally got his way by sending his arch nemesis out of the game. Before her ouster, Kemi begged and pleaded for the Veto winner Sam Smith to pull her off the block, but he didn’t want to create any ripples in the game so he didn’t use it. On eviction night Kemi received 10 votes while Jessica earned Michie’s rogue vote, which was really just his way of causing drama in the house.

Will the fourth comeback camper end up being one of the current nominees, Cliff and Jessica, or will a replacement nominee be sent packing? We’ll find out when the third live eviction episode airs Thursday, July 18 on CBS. In the meantime, cast your votes below to let us know whether you’re hoping that David, Ovi or Kemi returns to the game.