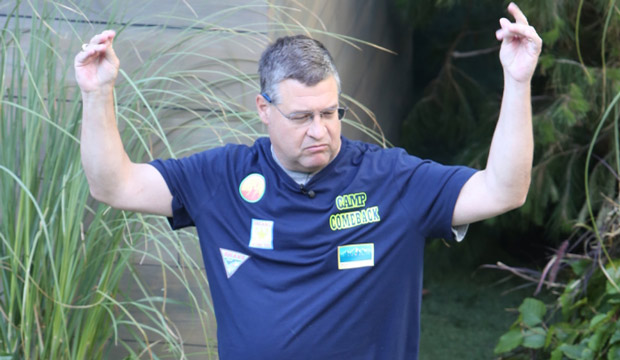 If “Big Brother” fans had their way, Cliff Hogg would be the ultimate winner of Season 21. This 54-year-old petroleum engineer from Houston, TX is one of only three houseguests to earn double-digit support in our recent poll that asked readers to name their dream winner, with the others being Nicole Anthony at 24% and Kathryn Dunn at 18%. Do you agree or disagree with those poll results? Have you say down in the comments section.

Cliff nearly fell victim to the middle-aged man curse when he was banished by Camp Director Jackson Michie on day one. Luckily, he found his way back to the house and David Alexander was ousted instead. For whatever reason, houseguests from Cliff’s generation are often the first people evicted by their younger counterparts, including most recently Steve Arienta in Season 20 and Glenn Garcia in Season 18.

The season’s first Head of Household, Christie Murphy, nominated Cliff for eviction but luckily his buddy Sam Smith won the Veto and removed him from the block. That prevented Cliff from falling victim to the “Big Brother” curse and paved the way for his ascent in the house, which included winning Head of Household in the fourth week just hours after returning from being evicted thanks to the Camp Comeback twist.

SEE‘Big Brother 21’ spoilers: Jessica’s blindside plan is (sort of) revealed, but we can still look on the bright side

Cliff’s HOH reign was full of drama as he nominated the biggest physical threats in the house — Michie and Jack Matthews — in the hopes of breaking up the dominant eight-person alliance, Gr8ful. After Michie won the Veto, Christie confessed to Cliff she had the Panic Power which would allow Michie to name the replacement nominee. So Cliff promised to put up Isabella Wang, Christie’s target, in order to let her hold onto her power for a rainy day, an act that subsequently endeared him to the powerful alliance.

As the Gr8ful alliance got slightly bigger (Unde9able) and then smaller (Six Shooters), Cliff remained constantly loyal to his fellow underdogs: Nicole, Kat and Jessica Milagros. Jessica is now in control as the Head of Household, which has given Cliff’s group safety for the first time in weeks. Will he end up making it all the way to the finale?

SEE‘Big Brother 21’ spoiler: Week 6 Power of Veto ceremony results on #BB21 and what they mean for August 8 eviction

Here are the complete results from our poll that asked “Big Brother” viewers to name who they HOPE will win Season 21: