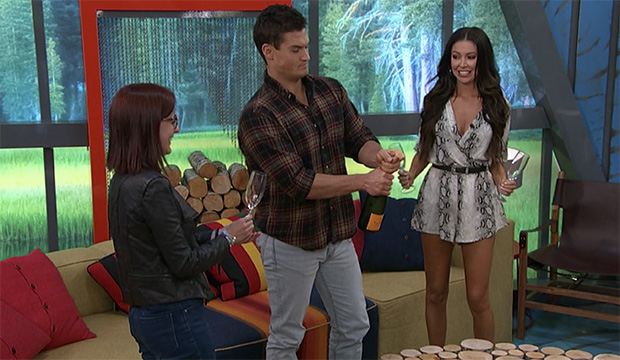 It’s been another wild and wacky summer inside the “Big Brother” house, but the time has finally come to reveal the winner of the camp-themed Season 21. Heading into Wednesday’s 90-minute finale, only three houseguests remained in the running to claim the $500,000 prize: challenge beast Jackson Michie, his showmance partner Holly Allen and ultimate underdog Nicole Anthony. By the end of the episode, the jury had voted for one finalist to join the “BB” winners list and America’s Favorite Houseguest was also named. So how’d it all play out?

SEE‘Big Brother 21’ spoilers: Nicole tries to campaign to a showmance, while Jackson starts getting paranoid

Below, check out our minute-by-minute “Big Brother” recap of Season 21, Episode 40 to find out what happened Wednesday, September 25 at 9:30 p.m. Then be sure to sound off in the comments section about your favorite houseguests on CBS’s reality TV show and what you thought of this latest addition to the “Big Brother” winners list. Keep refreshing/reloading this live blog for the most recent updates.

9:30 p.m. — “Previously on ‘Big Brother’!” In Sunday’s 39th episode, Michie won Part 1 of the final Head of Household competition, which meant he’d automatically advance to Part 3 and face off against whoever won Part 2, either Holly or Nicole. Elsewhere in that penultimate episode, host Julie Chen Moonves interviewed the Final 3 of Season 20, Kaycee Clark, Tyler Crispin and JC Mounduix. Who will follow in Kaycee’s winning footsteps? For the final time this season … let’s go!

9:40 p.m. — We kick things off with the jury gathering to be interviewed by BB legend Dr. Will Kirby. Tommy Bracco, Christie Murphy, Jessica Milagros, Nick Maccarone, Analyse Talavera, Kathryn Dunn and Jack Matthews learn that Cliff Hogg is joining them as Juror #8. Cliff explains how he was evicted and the jury can’t believe Cliff ever believed Michie would choose him over Holly. When discussing who should win, Nick thinks Michie has dominated and the competitions speak for themselves. Kat says the jury is wrong about Michie and he was more than a competition beast, he was a loyal player. Analyse can’t believe what she’s hearing from Kat and Cliff agrees with Analyse that Michie is a liar and schemer. Cliff doesn’t mind Michie’s game he just wishes he would own up to it and stop saying how honorable he is. Tommy feels Michie is a condescending person, but it’s a game. Tommy isn’t sure if he can vote for Michie to win or not.

9:45 p.m. — What does the jury think about Nicole? Tommy loves her humility and would love to give her his vote. Kat says Nicole has played the best social game and Christie calls Nicole a brilliant strategist. Cliff admits his game would have been over a long time ago without Nicole. Analyse isn’t sure if Nicole’s game was strategy or luck and Nick doesn’t believe she played the entire summer. Jack doesn’t respect floaters, but Kat defends Nicole saying she was always part of an alliance, Jack just never allowed her in his. As for Holly, they think Michie was both the brains and the brawn to that duo. Analyse doesn’t think Holly deserves to win, but Analyse sure seems to have a lot of opinions for being the absolute worst player in the jury house. Christie wants to know if Holly planned to shield herself with Michie or just fell in love and lucked out. Kat defends Holly and says she is the one who calmed Michie down and is probably the reason he’s still in the house.

9:50 p.m. — Analyse keeps questioning if Holly did anything and Nick quickly shoots Analyse down by saying Holly won two HOH comps and Analyse didn’t win anything. Tommy says Holly showed up when she needed to and Kat adds that Holly went after big targets while Michie targeted bottom-feeders (much to the chagrin of Jess and Analyse). Jack compliments Holly’s relationships with people outside of her alliance and her ability to remain off the block for 83 days.

9:55 p.m. — It’s time for Nicole and Holly to face off in Part 2 of the final HOH. This is a memory game in which each player has to place correct day numbers on pictured memories throughout the summer. With a time of 10:38, Holly defeated Nicole by four minutes. Michie is thrilled and he knows he’s heading to final two with his girlfriend. Nicole is crushed and she’s disappointed she couldn’t pull off an underdog win this season. Later she tells Holly to advocate for herself in the final. Holly says Michie thinks he’s already won this game and Nicole suggests Holly take her instead. Nicole says the jury will think Holly hid behind Michie, but Holly doesn’t know if she could morally defend evicting her boyfriend.

10:00 p.m. — Time for a showmance face off! In Part 3 of this HOH, Holly and Michie must identify false statements about the summer at “Camp Big Brother.” After eight rounds, the player with the most points will win the final HOH. At the conclusion of this game, Michie won with a perfect score of 8 to Holly’s 7. Michie continues his dominance by winning the final HOH. I just can’t imagine how Michie loses this game at this point.

10:05 p.m. — It’s time for Michie to cast the final eviction vote of the summer. Holly says it’s been an honor to play alongside him and been her ride or die. Nicole says she respects Michie’s game and throws out some softball pleas for him to keep her even though she knows he won’t. At last, Michie stands up and sends Nicole out the door.

10:15 p.m. — Nicole heads out for her interview with Julie. She’s not shocked Michie evicted her but she always held on to a little bit of hope. In the middle of speaking her family members in the audience catch her eye and she starts to cry. After composing herself, Nicole says she learned to love herself in this game and Julie sends her off to jury.

10:20 p.m. — Nicole is revealed as they final juror and Julie tells the jury that Michie won the final HOH. The juror looks impressed and I’m certain Michie is about to win in an absolute landslide. Cliff asks Michie how important his jury management was to his game? Michie says he was forced into his own game and he only lied when he needed. It was never personal and well thought out and strategic. Christie asks Holly what her strategy was when she walked into the game and how did it evolve? Holly says she flew under the radar and held back in mental competitions. She also said she listened more than she spoke and won when she needed to without showing her cards. Tommy tells Michie that he’s degrading and they’re not sure they want to vote for him. This is an opportunity for Michie to prove them wrong. Michie says he’s intense but he has never disrespected any woman or acted degrading. He just gets worked up.

10:25 p.m. — Analyse says Holly played Michie’s game and needs specifics on how Holly played her own game. Holly said they played their own game and had different targets. Holly said she went after bigger targets while Michie went after middle-ground players. Holly argues she wasn’t riding Michie’s coattails, she was dragging her heels in behind him so he didn’t jump off a cliff. Holly says she managed Michie because she needed him as a teammate, but played a very different game. Finally, Jessica asks Michie why he deserves to win over Holly. Michie said a mouthful but says he did a lot behind the scenes and didn’t just win competitions. Jack asks Holly the same question and Holly says she played with honesty and integrity. She was a straight shooter with everyone in the house and managed to keep the target off her back because she managed her relationships well. Michie looks pissed.

10:30 p.m. — Michie and Holly both give their closing arguments. Michie basically begs the jury to vote based on game and not emotions. Holly says she flew under the radar and showed cards when she needed to. She bragged about being smart and athletic and played up her country grit. She is pitching hard! Michie is totally gonna break up with her if she wins. Time for the jury to vote!

10:35 p.m. — The players who didn’t make it to jury join the show. Julie asks questions about some controversial topics and Ovi Kabir calls out the Gr8ful alliance for bullying Nicole. Nicole says it was a frustrating moment and she was never even allowed to stick up for herself but forgives them and will move forward. Kemi says Jack, Michie, Christie and Nick had an unhealthy obsession with her and she hopes when they watch the footage they hope they understand why it was received the way that it was. Christie looks terrified that America hates her. Jack apologizes to Kemi while she gives him an emotionless stare. Christie says she’s not sure what was said, but she’ll watch the footage and she’s sorry if feelings were hurt. Michie doesn’t know what Kemi is talking about and he has no issues with her.

10:50 p.m. — Julie confronts Jackson and says some viewers think he banished David, Jessica and Kemi in Week 1 because they were minorities and Cliff because he is older. Michie can’t believe the accusation and says it was all about game play. David Alexander responds and says Michie was playing the game, but when footage watched back the other players will see the implied biases that were in the house. Next, Julie points out that Nick is a jerk and asked why he told Isabella Wang he loved her and then hooked up with Kat in the jury house. Bella said Nick made her look stupid and nobody deserves to feel that way. What an awkward reunion! Michie is still looking dumbfounded and disturbed by what a pile of garbage this segment made him look like.

SEE ‘Big Brother’s’ Hottest Showmances: 7 Couples That Are Still Together (And 13 That Split) [UPDATED 2019]

Here are the answers to Gold Derby’s contest questions for the “Big Brother” Season 21 Finale:

Who will place 2nd? Holly Allen

Who will place 3rd? Nicole Anthony

Who will be named America’s Favorite Houseguest? Nicole Anthony