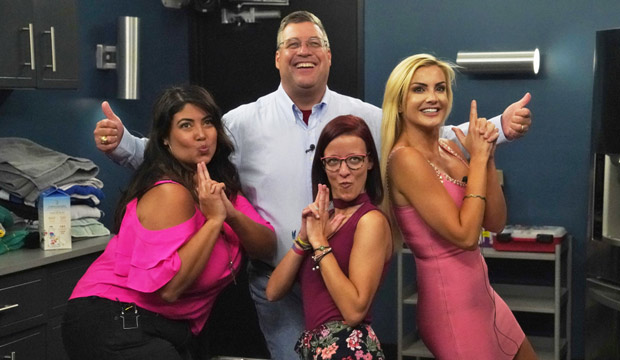 After weeks of being one of the underdogs on “Big Brother” Season 21, Jessica Milagros finally broke through by winning the Head of Household competition. “I am ecstatic,” the Illinois plus-size model proclaimed at the end of Sunday’s episode after nominating physical threats Jackson Michie and Jack Matthews for eviction. “There is some type of just sweet, sweet, sweet revenge. [Michie] banished me. [Jack] had me on the block. Both of them have made me feel powerless and I’m taking my power back.”

Jessica continued on, “If it means that I’m taking aware theirs, so be it. That’s the name of the game.” As a refresher, Michie banished her to the “BB Wilderness” on day one but she managed to find her way back to the house. And Jack nominated her for eviction in week two alongside Kemi Fakunle, who was ultimately voted out.

SEE ‘Big Brother’ 21 twist: Here’s how to vote for America’s Field Trip, where outcomes range from safety to being nominated

Soon after winning HOH, Jessica celebrated with fellow outcasts Cliff Hogg, Kathryn Dunn and Nicole Anthony. This foursome reflected on how they were forced to come together by default when the Six Shooter (Jack, Michie, Holly Allen, Analyse Talavera, Christie Murphy and Tommy Bracco) kept excluding them from conversations. Now Jessica’s team is finally getting their just desserts.

“I’m on no man’s island,” Michie grumbled to the camera following the nominations ceremony. “I’ve been on my own a lot and trusted the wrong people. I’m not gonna go out of here with my tail tucked between my legs. I came here to play ‘Big Brother.’ I’m playing it and I’m not gonna go down without a fight.”

For his part, Jack declared how “Big Brother” is a “really hard game.” Tearing up in the Diary Room, he added, “I just made a wrong choice, betrayed a friend [Michie] … it just sucks.” Jack was referring to how he blew up Michie’s game when he told the Six Shooters about Michie’s theory that Holly and Kat knew each other outside the house (they didn’t).

How will the Veto affect Jessica’s nominations, if it all? Find out Wednesday night on CBS. In the meantime, keep casting your votes for who you want to take part in America’s Field Trip. The winner of this special competition will win safety next week, while the loser will be put up as a third nominee.