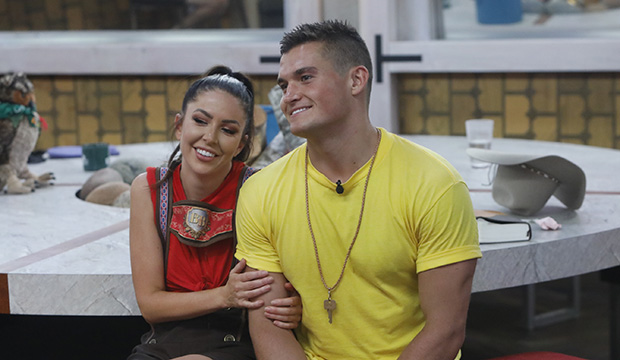 Poor Holly Allen. She got to be Head of Household on “Big Brother” again only to see her power cut in half by the latest twist in the game: America’s Prankster. Since Julie Chen Moonves revealed this game-changer on Thursday’s live episode of #BB21, Holly has been having a meltdown. We’ve been watching the live feeds and have all the spoilers, including who Holly is planning to name as the Week 9 eviction nominations.

Holly is confused about how the nominations will go this week. Does she get to name two houseguests only to see whoever is chosen as America’s Prankster secretly change one of them? Or is she only allowed to single out one of her rivals with the other being picked by the winner of this powerful power?

Holly went to bed late Thursday assuming that she will have to target two houseguests. Her pal Jackson Michie had spent the evening by her side, lobbying hard to put Christie Murphy up for eviction again. He had her in the firing line last week and is still determined to see her go. And he wants to see Nick Maccarone, who was the only one to vote for Christie’s ouster over Analyse Talavera, as the other nominee.

All this could change on Friday morning, when the results of the overnight vote for America’s Prankster are revealed. If you haven’t weighed in yet, make your voice heard at the official “Big Brother” website. You only have until 9 am PT/noon ET on August 23 to cast up to 10 votes for the houseguests you most want to see in charge of one of the Week 9 nominations. And remember, America’s Prankster will also get to name the replacement nomination if the Veto is used. So choose wisely.