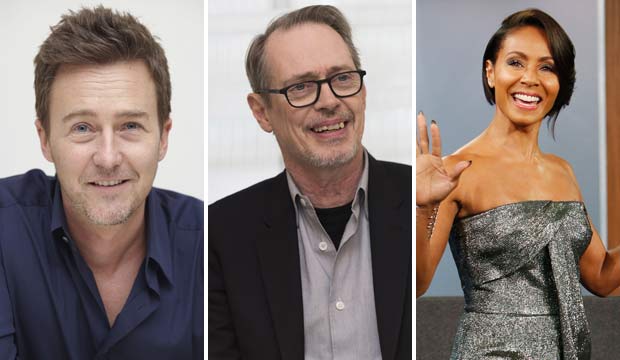 The Daytime Emmys don’t get as much attention as their primetime counterparts, but their list of winners could be just as star-studded. Check out our list of 17 noteworthy names you might be surprised to find out could be Emmy champs by the end of the weekend.

Jay Baruchel (Best Animation Performer, “Dragons: Race to the Edge”) — Baruchel has voiced the heroic Hiccup in the “How to Train Your Dragon” franchise since 2010 on the big and small screens, but this is the first Emmy nomination of his career. He’s also known for his roles in the series “Undeclared” and in films like “Million Dollar Baby,” “Knocked Up” and “Tropic Thunder.”

Kristen Bell (Best Special Class Short Format Program, “Momsplaining”) — Bell hasn’t gotten the time of day at the Primetime Emmys despite roles in “Veronica Mars,” “House of Lies” and “The Good Place.” But now she could win for the first time for her parenting advice web series, which she produces with Daytime Emmy magnet Ellen DeGeneres.

Steve Buscemi (Best Preschool Animation Performer, “Elena of Avalor”) — After years of trying he finally won his first Primetime Emmy in 2016 for his short form series “Park Bench.” But if he wins this prize for voicing Saloso in “Avalor,” it would actually be his first victory for acting.

SEEFork yeah! Kristen Bell could finally win Emmy in daytime after primetime snubs for ‘Veronica Mars’ and ‘The Good Place’

Guillermo Del Toro (Best Animation Directing, “Tales of Arcadia: Trollhunters”) — The “Shape of Water” Oscar winner is actually no stranger to the Daytime Emmys. He previously won for directing the Netflix animated series “Trollhunters” in 2017. This year he could win a bookend to that prize.

Mark Hamill (Best Animation Performer, “Kulipari: Dream Walker”) — In some circles, Hamill is just as well known for his voice-over work as he is for playing Luke Skywalker in the “Star Wars” films. His performance as the Joker in the “Batman” animated shows and video games is arguably as iconic as the big-screen portrayals by Jack Nicholson and Heath Ledger. But he has never won an Emmy for his voice acting. He could claim his first prize this year.

Will Ferrell (Best Special Class Writing, “The Royal Wedding Live with Cord and Tish!” and “The 2018 Rose Parade Hosted by Cord and Tish”) — The “Saturday Night Live” alum never won a Primetime Emmy for his work in the sketch comedy series, and he has been nominated several times more as a producer of shows including “Drunk History” and “I Love You, America” without winning (this year’s he’s also a contender for the Best Drama hopeful “Succession”), so if he wins one of these two writing prizes, it’ll be his first Emmy as well.

SEEAn Emmy at last for Will Ferrell? The ‘SNL’ alum has two chances to finally win in daytime for ‘Cord and Tish’

John Legend (Best Special Class Animated Program and Best Interactive Media, “Crow: The Legend”) — Legend already wrapped up his EGOT last fall when he won a Primetime Emmy for producing “Jesus Christ Superstar: Live in Concert.” But he could add another couple of trophies to his increasingly crowded mantel for producing this animated short.

Katrina Lenk, Ari’el Stachel and Tony Shalhoub (Best Musical Performance, “Today”) — The entire cast of Broadway’s “The Band’s Visit” could win an Emmy for performing “Answer Me” on “Today.” That includes Lenk and Stachel, who also won Tonys and Grammys for their performances and would thus be an Oscar away from EGOT. Shalhoub is a longtime Emmy favorite, but unfortunately he won’t be that close to EGOT since he wasn’t a credited principal soloist on the cast recording; he’d still need a Grammy and Oscar to complete the grand slam.

Ruth Negga (Best Animation Performer, “Angela’s Christmas”) — Negga earned an Oscar nomination for Best Actress for her breakthrough role in the fact-based civil rights drama “Loving” (2016) and she also had major TV roles in “Agents of S.H.I.E.L.D.” and “Preacher.” Voicing Mother in this animated short could get her into the Daytime Emmy winner’s circle.

SEEShortcut to EGOT? Katrina Lenk and Ari’el Stachel could be the latest to win Tony, Grammy and Emmy for one show

Edward Norton (Best Children’s Program Performer, “Ask the StoryBots”) — The three-time Oscar nominee is better known for his work on the big screen, but he does have one past Primetime Emmy nomination, for producing the nonfiction special “By the People: The Election of Barack Obama.” His guest performance in this Netflix children’s series as Gary the Electronics Salesman would be his first ever win.

Jada Pinkett Smith (Best Informative Talk Show, “Red Table Talk”) — Pinkett Smith produces this Facebook streaming talk show in which she discusses a variety of topics with her mother Adrienne Banfield-Norris and her daughter Willow Smith. This is the first Emmy nomination of the veteran actress’s career.

J. August Richards (Best Digital Drama Guest Performer, Best Digital Drama Writing and Best Digital Drama Directing, “Giants”) — Nobody in the “Buffyverse” ever got their due from the Emmys. Richards was a regular on “Angel” as Charles Gunn, and he later appeared in the dramas “Conviction,” “Raising the Bar,” and Joss Whedon‘s aforementioned “Agents of S.H.I.E.L.D.” Now he’s a first-time Emmy nominee, and a three-time nominee at that, for acting, writing and directing this streamin drama series.

Jussie Smollett (Best Digital Drama Series, “Giants”) — It looks like the controversy-plagued Smollett is out at “Empire,” but this weekend he could pull off what “Empire” still hasn’t: win an Emmy. He’s an executive producer of “Giants,” which is the most nominated digital drama series of the year.

Debra Birnbaum and Jenelle Riley (Best Special Class Series, “Variety Studio: Actors on Actors”) — A couple of members of the Gold Derby Extended Universe are in the running for Emmys this weekend too. Expert pundits from our sister site Variety, Birnbaum and Riley could prevail as producers of the “Actors on Actors” series. Good luck!