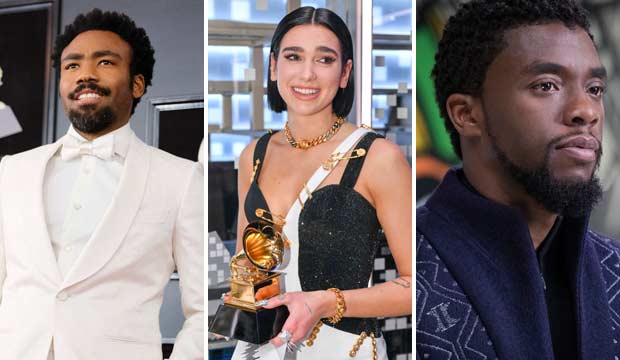 How did Gold Derby do predicting the 2019 Grammy Awards? We forecast 32 out of the 84 categories that were decided by the recording academy this year, and the collective wisdom of thousands of Gold Derby users who entered our predictions contest was right for almost two-thirds of the awards (65.63%). But that means there were 11 winners we didn’t see coming — 12 if you count the unexpected tie for Best Rap Performance. Scroll down to see which winners shocked us the most.

Three of those surprises were for the same song: Childish Gambino‘s “This is America,” which defied our odds by claiming Record of the Year and Song of the Year (over front-runner “Shallow” by Lady Gaga and Bradley Cooper), as well as Best Rap/Sung Performance (over presumed favorite “All the Stars” by Kendrick Lamar and SZA).

The Record and Song of the Year victories were surprising because until now no hip-hop song had ever won those top two awards, and the Rap/Sung Performance win was unexpected because it almost always pays to bet on Lamar in rap categories. But not all of us were taken off guard. Enough of us (but not me) were savvy enough to predict Childish Gambino that he ranked a close second in our odds in all three categories.

Dua Lipa also pulled off an upset in the general field, claiming Best New Artist even though our odds favored H.E.R. And that made sense: H.E.R. had five total nominations including Album of the Year for her self-titled EP, while Dua Lipa only had two bids, so it seemed like the recording academy liked H.E.R. better. But again, many of our users were on the right track (and again, not me), so we ranked her second in our overall predictions.

Also ranked second in our forecasts was the “Black Panther” score by Ludwig Goransson (who also won Record and Song of the Year for “This is America”). Goransson is currently an Oscar nominee for his “Panther” compositions, so his victory didn’t come completely out of nowhere, but he still had to overcome the reigning Oscar winner Alexandre Desplat (“The Shape of Water”) and Grammy darling John Williams (“Star Wars: The Last Jedi”).

In fact, out of 32 categories, there were only four winners who ranked lower than second in our odds. Though we thought Lady Gaga would clean up for “Shallow,” we didn’t anticipate her victory for Best Pop Solo Performance for “Joanne.” Willie Nelson also achieve a major upset by winning Best Traditional Pop Album for “My Way” against the usually bulletproof Tony Bennett.

St. Vincent‘s “Masseduction” won Best Rock Song when we weren’t expecting her to. And then there was that tie. We were right that Kendrick Lamar and his collaborators would win Best Rap Performance for “King’s Dead,” but we thought Anderson Paak was such a non-factor that our odds ranked him dead last. It turned out both of them won. Nobody’s perfect.

SEEHow did Alicia Keys do hosting the 2019 Grammy Awards? [POLL]

Check out the complete list of surprises below. Did you see these outcomes coming?

RECORD OF THE YEAR
Childish Gambino, “This is America” (ranked 2nd with 5/1 odds)

SONG OF THE YEAR
Childish Gambino, “This is America” (ranked 2nd with 11/2 odds)