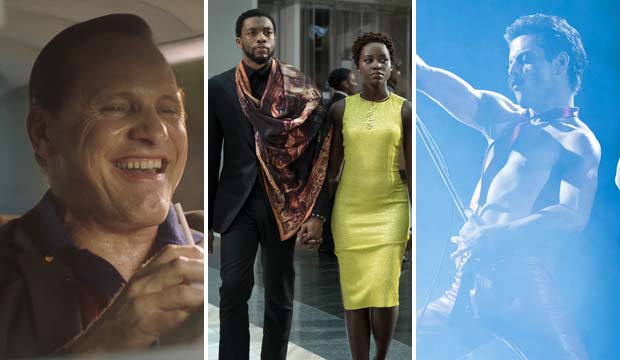 More than 8,000 Gold Derby users ended up predicting the 2019 Oscars, and our collective wisdom was right more often than not, but this year proved to be more challenging than usual to predict with lots of close calls and a few big upsets. Our racetrack odds correctly predicted 14 out of the 24 categories (58.3%). So what were the 10 races that confounded us? Scroll down to see our list of the year’s most surprising winners.

Maybe “confounded” is too strong a word. While 10 Oscar winners defied the odds, they didn’t defy the odds by much. Of the categories where we didn’t predict the winner, our second-ranked choice won nine times. Only once did we have the ultimate winner ranked lower than that: Best Sound Editing, where we favored “First Man” to win with “A Quiet Place” positioned to upset, but third-ranked “Bohemian Rhapsody” ended up taking the prize.

Actually, most of the categories we got wrong were because we underestimated three specific films, and “Rhapsody” was one of them. We were right that the music biopic would win Best Actor (Rami Malek) and Best Sound Mixing, but we underestimated it for Best Sound Editing and Best Film Editing. In fact, “Rhapsody” ended up being the night’s biggest winner with four victories out of five nominations. The only award it lost was Best Picture.

Speaking of which, we thought “Roma” would claim Best Picture after victories at the Directors Guild Awards and BAFTAs, but that prize ended up going to “Green Book,” which we knew was a threat because it had won the Producers Guild Award, which uses the same preferential ballot that decides the top Oscar. That film about race relations in the Jim Crow South also surprised us by winning Best Original Screenplay over the favorite in that category, which was, well, “The Favourite.” The only “Green Book” win we correctly predicted was Best Supporting Actor (Mahershala Ali).

The superhero movie “Black Panther” had the biggest disparity between our predictions and the outcome. According to our odds, the Marvel film was likely to go zero-for-seven, which would have made it the year’s biggest shut-out. Instead, it won three: Best Costume Design, Best Production Design and Best Score. But again, we had ranked it second in all three categories, so we knew it was in the hunt.

“The Favourite” actually lost three times where we had expected it to prevail, and after it lost the writing award to “Green Book” it looked like the period film might be on its way to a big goose egg. But then it achieved an upset of its own when Olivia Colman won Best Actress over front-runner Glenn Close (“The Wife”). Though we ranked Colman second in that category it might have been the single biggest surprise of the night since Close was considered grossly overdue after seven nominations and no wins. Maybe next time.

Did you see these winners coming, or were you as surprised as we were? Check out all the upsets below.