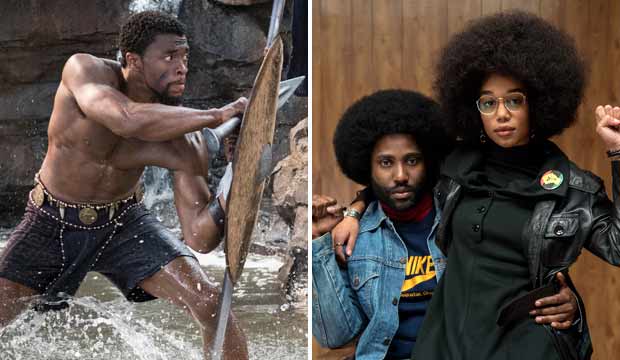 Slowly but surely, Oscar has been filling in the blanks of its ballot categories that have never resulted in a black winner. Just last year, Jordan Peele became the first African-American to take the original screenplay prize for his socially aware horror film, “Get Out.” This year, he became the first black producer to compete twice for a Best Picture Academy Award, the second being for Spike Lee’s “BlacKkKlansman.”

The legendary Lee, who is just the sixth black helmer to compete on Hollywood’s biggest night, could change the record books himself if he achieves what John Singleton, Lee Daniels, Steve McQueen, Barry Jenkins and Peele didn’t do – win Best Director.

But there are plenty more categories below the line as well as above where history can be made.

*Hannah Beachler, who previously worked on 2015’s “Creed” and “Miles Ahead” along with 2016’s “Moonlight,”  could become the first black person to win an Oscar for Best Production Design for “Black Panther.”

*Ruth Carter, who previously was nominated for her wardrobes for 1992’s “Malcolm X” and 1997’s “Amistad,” could become the first black person to win for Best Costume Design for “Black Panther.” In the meantime, she has tied actresses Octavia Spencer and Viola Davis for the most nominations for a black woman with three.

*As for one of Lee’s favorite music makers, Terence Blanchard, he is trying to become the first black person to win the Oscar for Best Original Score in over 30 years.  Prince was the first black winner for Best Original Song Score, a now-defunct category, for his “Purple Rain” soundtrack. Blanchard, however, would follow Herbie Hancock’s score win for his work on 1986’s jazz-oriented “Round Midnight.”

*If SZA (Solana Imani Rowe) wins for the Best Original Song along with Kendrick Lamar, Sounwave and Al Shux for “All the Stars” from “Black Panther,” she would be the first black woman to do so since Irene Cara won for 1983’s “Flashdance … What a Feeling” from “Flashdance.”

*The likeliest win could be for innovative superhero ‘toon,“Spider-Man: Into the Spider-Verse,” the clear front-runner among the collective Gold Derby prediction odds.  Peter Ramsey, one of three directors credited, would be the first black filmmaker to win for Best Animated Feature.

There are far more oversights left to be rectified when it comes to the Academy Awards. No black person has ever been nominated for sound editing, makeup and hair or visual effects. But this year could provide a substantial step in the right direction to ensure that diversity continues to make inroads among those involved in creating one of our country’s most valued and universal art forms.

Netflix review round-up for 'The Irishman': Gangland crime pays off once again for Mob-movie boss Martin…

Which lead actress is most in need of overdue Oscar attention? Saoirse Ronan, Scarlett Johansson or…

Don't laugh! 45% say it's about time that Joaquin Phoenix wins an Oscar for 'Joker' [POLL…

Venice fest review round-up: Critics say 'I do' -- and how -- to Noah Baumbach's 'Marriage Story'…